Here are all the Long Skinnies together! Aren't they great? They got a lot of buzz at the show and I think we were all pleased. (There were two more that didn't fit the same catagory, even though they were long and skinny, so they were not hung along with these.)

The Dallas Quilt Show specifically says not to publish pictures without the artists' written permission, and I haven't asked each of the Twisted Stitchers... but 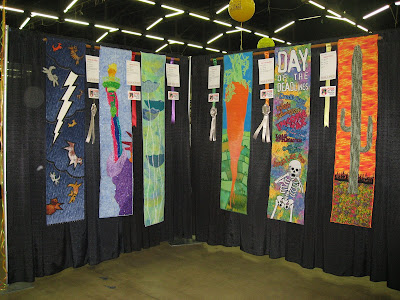 On the left is Tonya Littman's Raining Cats and Dogs inspired by last year's quilt show. Then we have Sandy's Statue of Liberty. She's got a whole Statue of Liberty thing going on in the bathoom of her wonderful quilt shop, so I'll get to see the quilt whenever I'm shopping and need a potty break! Delightful! Then my "lillies." It's the longest of them all! I can't believe I made something bigger than everyone else! Then Carol Morrisey's carrot, which I adore. The fields of farmland in the background are wonderful. Then Judy Krien's Day of the Deadlines. Very very clever and easily one of the most whimsical quilts in the whole show. (Judy, you must enter the "whimsical" catagory in Houston.) And then there is Sharon's cactus which has individually tied spikes made of twine. Very effective!

Today is the first day of Spring Break. We had planned a wonderful three day trip to San Antonio to do all the San Antonio stuff including Sea World, until we realized Sea World is closed this week. Grumble. We're doing all kinds of Dallas stuff instead. Today we are going to the zoo and maybe the Amon Carter museum. And definetely ice cream.

Posted by Deborah Boschert at 9:41 AM

Beautiful long and skinnies!! Sorry about Sea World. Our Spring Break was last week, and I hear Six Flags was open. Hope you get to the Amon Carter...check out the Fort Worth Zoo and ride the little train. That's one of our favorite things to do! Run down to Glen Rose and go to the Dinosaur Valley State Park...or come to our Mineral Wells State Park. Just a few suggestions...:>)

The long and skinnies are great. I especially like that carrot. I have been admiring your lilies all along. I am inspired to try a long and skinny of my own.

Hope you are having a fun spring break. We get to go to Florida in two weeks for ours. The boys are going to visit Cape Canaveral while Mom and I go quilt shop visiting.

Beautiful, beautiful! Just that shape would make people gravitate to see what's up and then BAM! They get superfantastic quilts in the same breath.

My 3-year old charlie and I were looking at the Long Skinnies. He saw Day of the Deadline and said "There's a skeleton! It's a boy skeleton. He say, "Oh No!"" ;)

They're lovely. Enjoy your spring break.