This one blew my mind. Honestly, I was dreading it since I am not a fan of cauliflower but it was fantastic.  It's called Cauliflower Soup with Toasted Garlic. Here's my version. 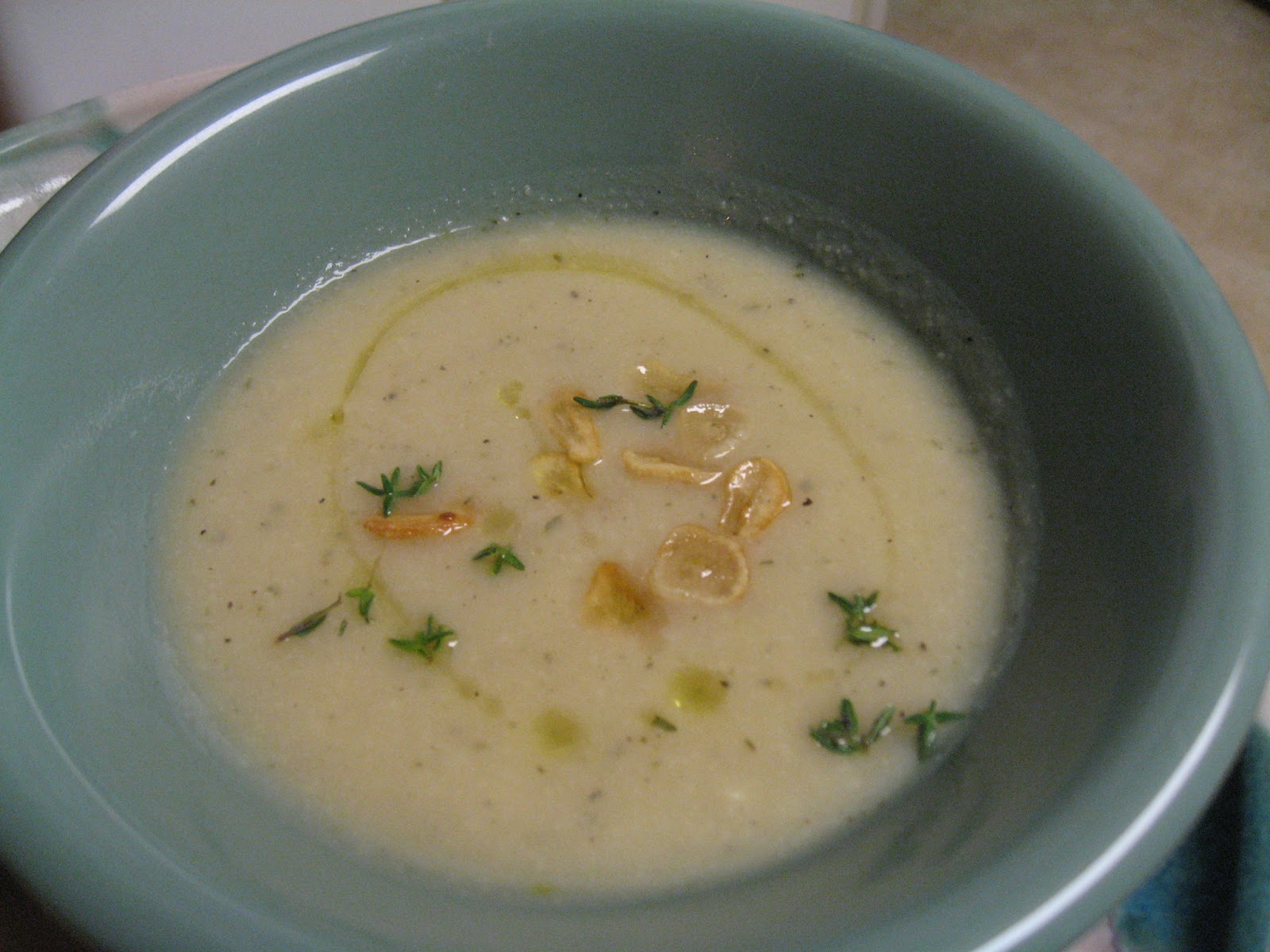 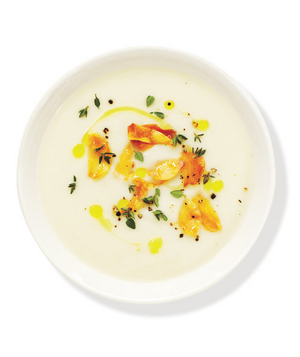 One of the best matches yet, don't you think? Visually at least? Remember, I'm not a food stylist and I don't have a white bowl, and I'm not doctoring the images in Photoshop in any way... because this endeavor is about making and eating the soup, not taking pictures of it!

This recipe has so few ingredients, I can't believe it's so rich and creamy. The toasted garlic was a wonderful addition. I wish I had toasted at least twice as much.

The olive oil I drizzled on top was the last few drops of this tiny bottle of decadent, outstanding olive oil that Jeff's aunt brought us from her trip to Italy. Perfect use for the last delicious bits! 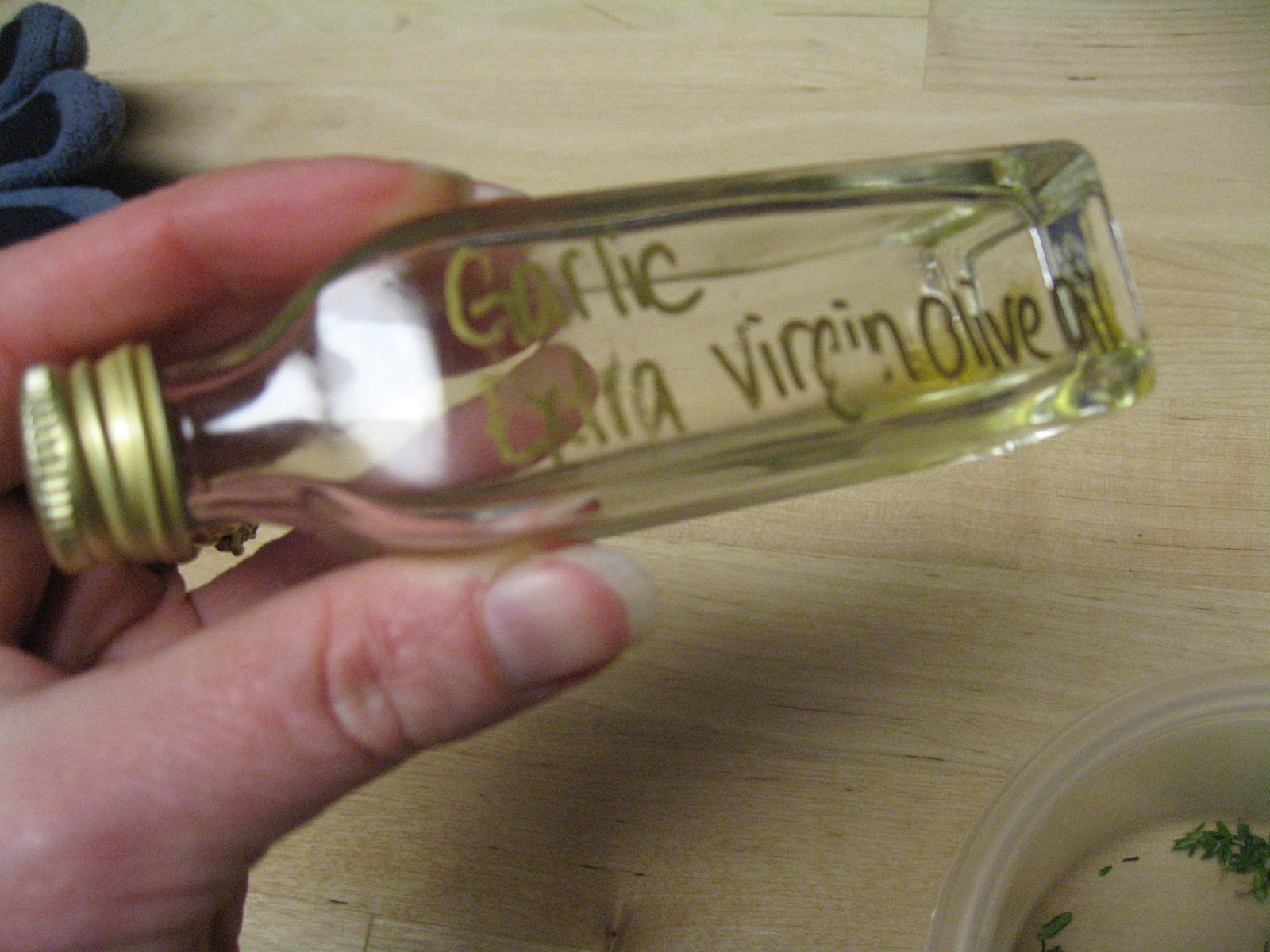 The next soup I made was the Chickpea, Vegetable and Pesto recipe. Here's my version. 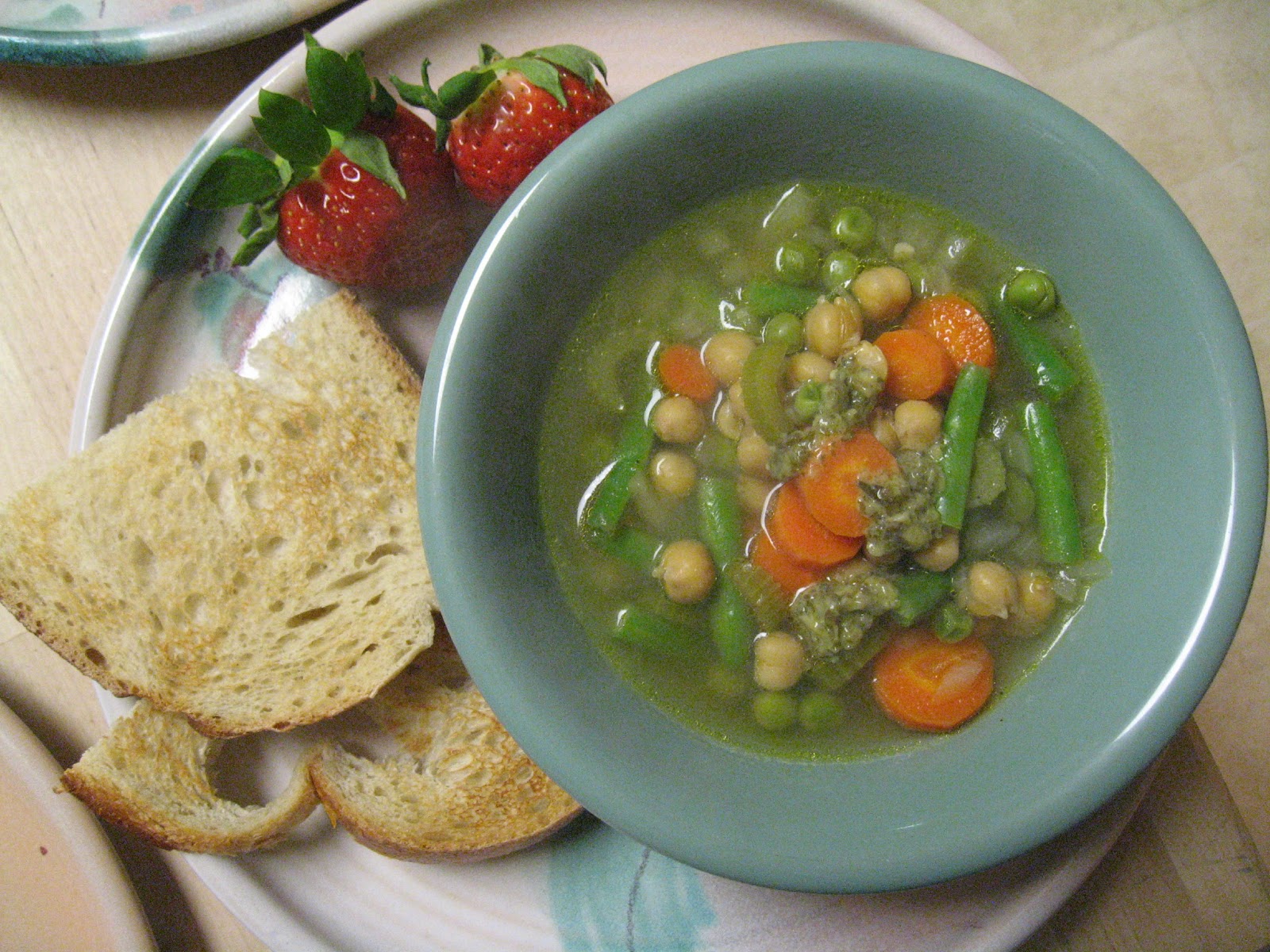 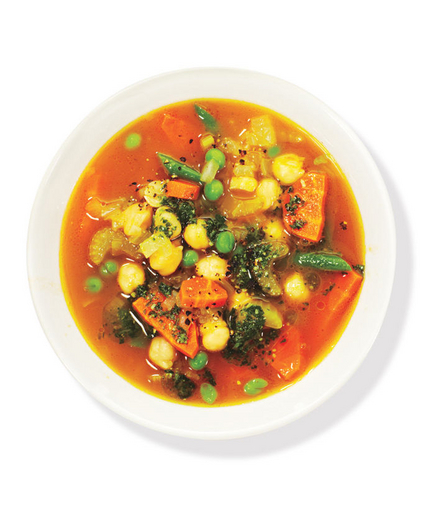 I don't know why their version is so red. It calls for vegetable broth which is more brown than red. This picture makes it look like it might have a can of diced tomatoes. It doesn't. Though maybe it should. My version may be tinted by the green bowl. Whatever. It doesn't really matter. It wasn't very good. I did not like it at all. Mind you, this is the fifth soup I've made of the ten from the Real Simple article and it's the first I haven't liked, so I'm ok with it.

I'm not a huge fan of vegetables, but I guess I just prefer them steamed with a bit of butter rather than tossed all together and trying to get some flavor from a dollop of pesto. I can also think of many preferable used for chickpeas.

Jeff liked it, though.
Posted by Deborah Boschert at 7:00 AM

I have been wondering the same thing. How did they get all the broth based soups so red or actually orange. There is only so much you can do in Photoshop.

I went looking for a barley and mushroom soup after seeing yours. I did look at the one you used but didn't like the 4 cups of carrots. I had made one years ago that began with a roasted beef bone. UGH. No wonder I never made it again.

Watch Top Chef last night. Did you see that the head chef for the boat had my last name??? A relative?? Who knows. It was such a fun surprise. And he pronounces it the way we do--wrong.

Enjoying your try-outs on soup. During winter here (it does get to10 Celsius) - I like to have a pot of soup of the stove constantly - usually left-overs & veggie soup. The cauliflower one does sound good.

Who knew cauliflower would be so tasty? Of course, garlic makes almost anything tasty! You're right about the soup matching the pic too. I thought of you the other day when I made a squash soup from Sunset magazine. It was very yummy even though my kids didn't eat it. Weird, though, they ate ramen the next night.

I love soups, but my least favorite are the mixed vegetable kind. I think I was scarred, in childhood, by canned Campbell's vegetable soup with the mooshy peas in it. They made me gag. The cauliflower soup sounds good. Cauliflower can be so yummy when cooked in something like that. I am enjoying the soup reviews!