Seven is all good. 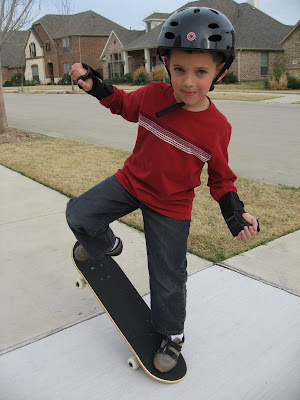 Though his actual birthday was last week, his party was this past Saturday. It was a Power Rangers party. I don't know exactly why he likes Power Rangers. He has never watched them on tv. But, they are still cool. 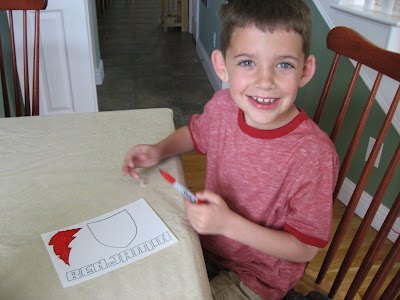 I managed the craft project, but after that Jeff took over. He planned an elaborate, super fun mission for the boys to complete.

Then the "Mission Commander" explained that five power orbs had been stolen by the evil Lord Mortorg and the newly appointed Power Rangers (party guests) would have to go out on a mission to recover them. 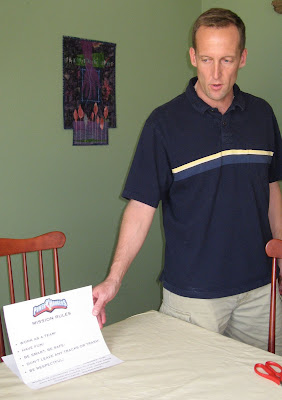 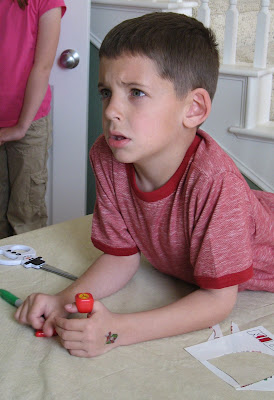 The mission required the Rangers to solve clues and then find locations out in our neighborhood. (All expertly planned, scheduled and implemented by the Mission Commander aka World's Best Dad!) 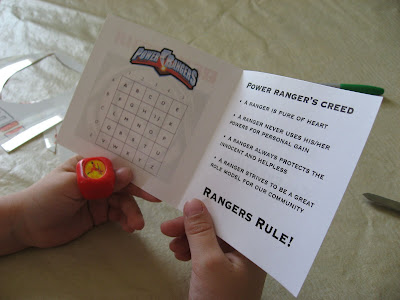 I drove the Megazord to the first stop. (Seriously, my only jobs were Shrinky Dinks, drive the car and bake the cake.) 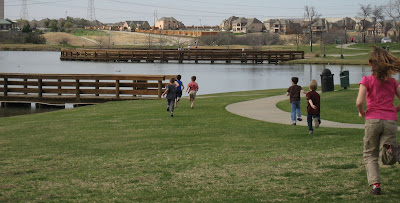 The second set of clues was hidden across from a cool waterfall. 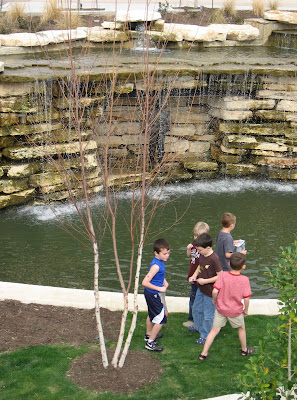 The Rangers proceeded to several more stops, did an obstacle course at a near by play ground, stopped for a water break and eventually succeeded in recovering all the power orbs. (If you saw the orbs, you might recognize them as neon bouncy balls. Ahem.)

The back to Base Camp for... 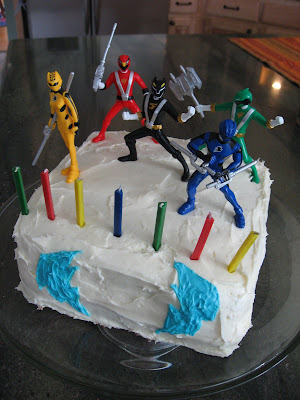 Benjamin and his friends had so much fun! 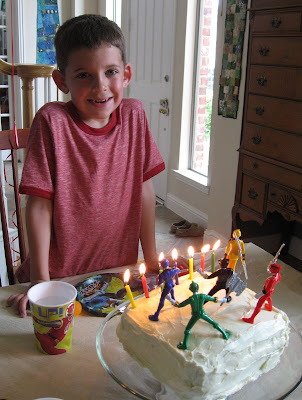 But wait... it was Jeff's birthday too. Today, in fact. 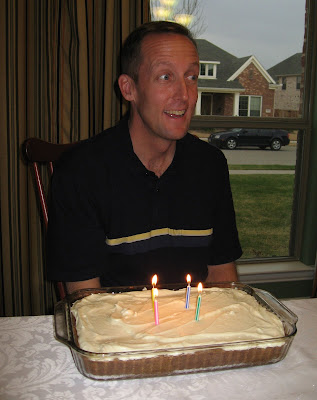 We had a great dinner here at home and enjoyed carrot cake for dessert. I am planning a "party" for next weekend. Jeff's parents will be visiting and I've got something serious up my sleeve for the six of us. I'm not sure I can compete with the Power Ranger party, but it's going to be fun.

I do need to borrow a long black wig. Does anyone have one?
Posted by Deborah Boschert at 10:49 PM

I don't have a long black wig, but I'd be happy to loan you my glittery gold one. ;-)

BTW, can I hire Jeff next fall for my kids' parties? I'm so worn out by solo party planning and implementing.

TELL me you're going as Elvira, Mistress of the Dark LOLOLOL!!!!!!!

And super brownie points for Jeff for such a cool search-and-find mission!

Eli's party is Sunday, and I'm absolutely OUT of ideas for 11 year old boys...too old for the kids stuff, too young for the pre-teen/teen stuff.....

I have seen your picture on your blog, and it seems to me that Benjamin looks a lot like you! Happy birthday to him and your hubby.
D~~~~

WOW, the best birthday party ever!!

You guys are such good parents. You make me sick! VVBG

My idea of a great party is take 'em to Craig's Cruisers, buy passes, buy pizza and drinks, sit and read a paperback while they wear themselves out and stuff themselves, go sit in car and read some more while they trade in their coupons for stupid prizes (at least ONE always gets a whoppee cushion).

Now birthdays consist of dinner out at the farm (where the ex still lives) which means I make bar-b-qued ribs and chicken, grandma makes her famous salad and auntie Annie makes (ok, buys) the birthday cake....Sunday the 22nd- Jamie is 25 and now we also have the fiance!!

You guys really are great.

Wow, look at your lovely family all grown up and everything. Glad to see the you are all well. Big fun. And thank you (ever so belatedly) for my beautiful Deborah made b-day card.