I completed a really fun little project a couple of weeks ago. Actually, it wasn't so little. It took a bunch of time of creative energy and I enjoyed every minute.

Alma Stoller has been a long long time internet friend. I think we met before either of us were blogging. I'm not exactly sure, but I think we met through a zine swap. So it seemed perfectly fitting when Alma decided to host another zine swap that I would join in! At least that's what I thought when she first announced it months and months ago, but I didn't actually sign up. Until I happened to meet Tracie Lyn Huskamp in Houston. We were talking about artist/friends we have in common and Tracie said, "You know, Alma is hosting a zine swap. You should sign up!" Ding! And so I did.

I pondered several ideas and finally settled on writing about Personal Symbols and including lots of images of my artwork. As I have worked on developing my own personal style, some images keep popping up. Why is that? What do they really mean? Are they just interesting shapes? Or do they have deeper meaning or reference to my life?

I wrote about houses, stones, grids, leaves and words. 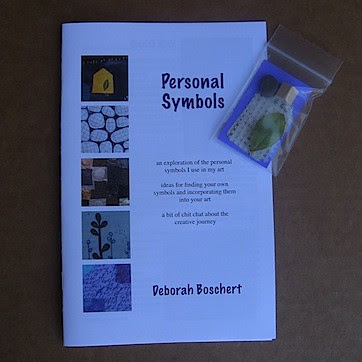 I also tried to include lots of ideas for identifying your own symbols and incorporating them into your art.

For Alma's swap I had to send in 10 zines including lots of little goodies, treasures and inspiration. Here are my stacks getting ready to be mailed. I hope the artists that receive them find them fun and inspiring. 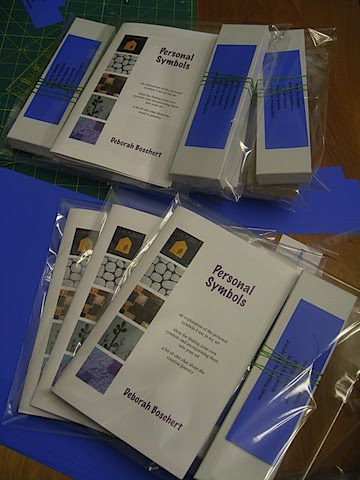 Usually zines include some hand made or interactive elements. I went for a more straight forward desktop publishing style this time. I just wanted it to be clean and stream lined. Easy to read. I wanted the words and pictures to stand on their own. The little boxes of symbolic icons are a nice complement, I think. Plus, it gave me the opportunity to learns the ins and outs of the Pages application now that we've switched to Mac.

I made several extra copies to put it my Etsy shop. Those copies include a tiny packet of symbolic arty stuff. 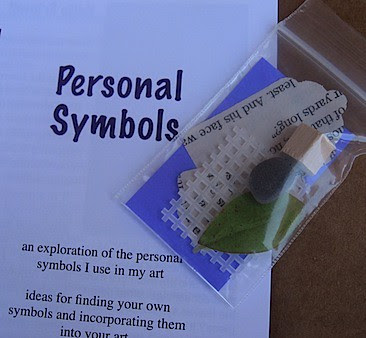 I was so pleased with how easy it is to drag and drop photos right into the layout. 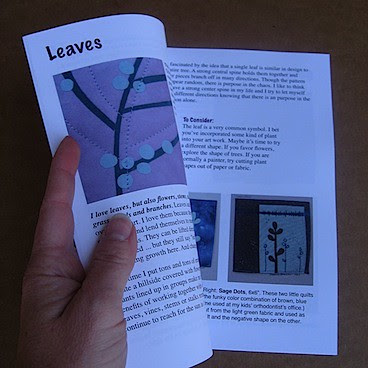 **As an aside, I'll tell you that I sent my box of zines to Alma on November 24 and they finally arrived yesterday. Grumble. But, the bright side of this story is that I printed my labels online and got a tracking number. There was not tracking record of the box after it left Texas, so I called customer service and proceeded to press various number and try various options hoping to talk with a real person. No luck. Then I just googled the phone number for the local post office and called them. They gave me another number to call and I finally had the pleasure of speaking with the lovely Becky. She took all my info and promised to call me back. When we spoke later she said she had called five numbers in New York (the box's destination) and finally found it had been delivered to the wrong branch office and was sitting waiting to be picked up by Alma... they hadn't notified her that it was there. Becky told them to reroute it and to update the tracking system. After two more days, Alma was finally able to get pick it up.

Posted by Deborah Boschert at 11:01 AM

Deborah! What a fun project. I love your theme, and as you are especially good at incorporating your personal themes, I'll bet your zine will offer a lot of good information. I'll bet you can't wait to see what you get back! (Ooh, and the timing will make it a wonderful holiday present!!) I'm off to Etsy ro order a copy orf your zine'!

The zine sounds and looks wonderful! Your work is very inspiring to me. I have been working with your book about art quilt series. It has been very helpful.

Deb! You sold out at your Etsy shop before I could get one! And I loved your first little book on making quiltlets in a series - any chance of a reprint, please?

I, too, would love one of these amazing books, as I have your first one too! Any chance you have one that managed to hide somewhere or any inclination to reprint?
Hopeful,
~jane