Every other year there is a pumpkin decorating contest at the kids' school. Look at the fabulous entries that Claire and Benjamin came up with this year!

Here is Claire's entry. I just think this is very very funny. (We saw the idea online, so it's not completely original.) 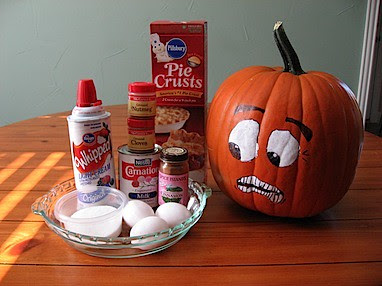 Benjamin wanted to make a "Kirby" pumpkin. Apparently, Kirby is the "super tuff pink puff" star of some new video game. We don't have this game, but Benjamin and his friends think it sounds fantastic. 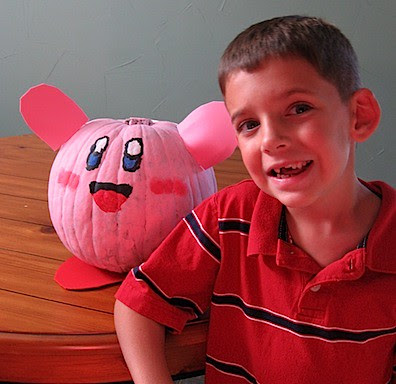 Here is an official picture of Kirby. Pretty amazing likeness, don't you think? Claire said that lots of her fourth grade friends were very impressed. 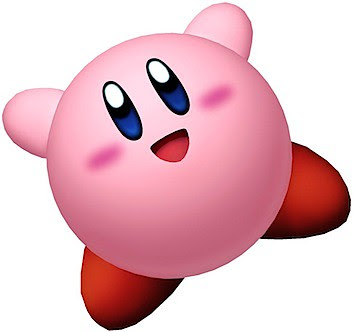 Attendees at the Fall Festival can vote for their favorite of the winning pumpkins with tickets. 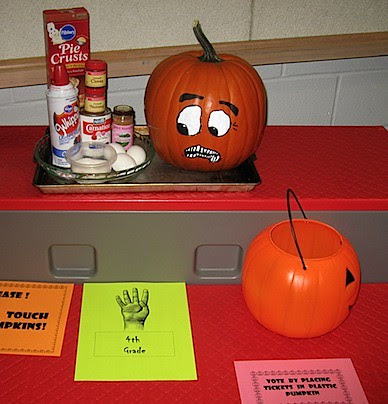 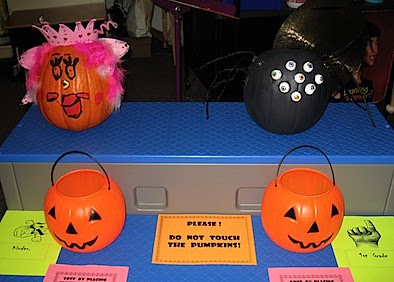 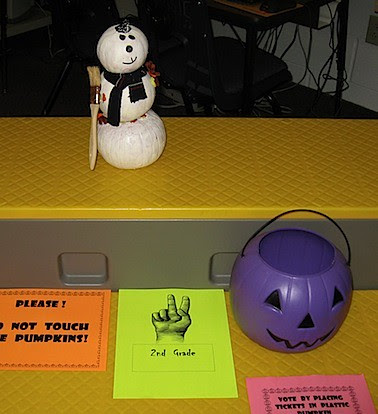 Very clever! That stem piece was supposed to be his mouth. 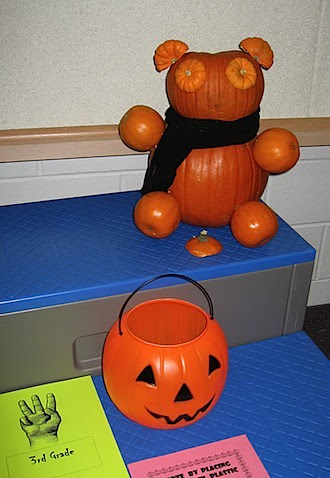 Here is the fifth grade entry. Several fifth grade boys were able to lobby loud enough to get enough tickets to win the contest. Good for them! 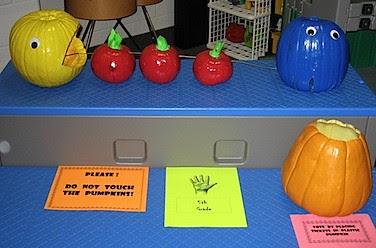 Benjamin wore his costume to the event last night. We're planning to make some kind of head wrap before Halloween.

Here is my variation on Claire's pumpkin. 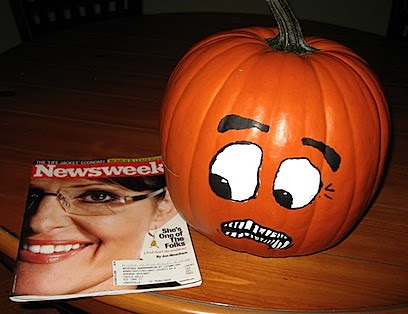 Posted by Deborah Boschert at 6:03 PM

Those are all so clever!

I especially love yours!

I'm so out of it, I thought Benjamin's was the Pokemon JigglyPuff. That must be so last year! I can't believe there are elementary school kids that know PacMan -- I'd vote for theirs even if they didn't lobby loudly!

That last photo would have had me spewing coffee if it had been morning. Did you ever see Mrs. Mel's photo of a pumpkin vomiting its innards - that could work! She actually used it in a slide show for how she felt after Bush won again.

Very clever pumpkins all around, and I love how the costume preview too. The last photo is like looking at my own expression in the mirror, captures the fear exactly!

I love the original and the variation. And, yes, we have heard of Kirby here, too. We don't have the game, either.

very funny! and of course your children are as creative as you are!

Your daughter has a warped sense of humour.....I love that in a person!! And, judging from the last photo, she comes by it honestly!! I kept hoping SP would get hit in the head with a puck at the Flyers/Rangers game last week....or at least fall on her ass after she dropped the opening puck.

You have two pretty talented kids there!!

Bwaaa! I got such a kick out of this entry. Thanks for the laugh.

Hi Deborah!
I was just strolling along, reading your entry, enjoying the creativity and cleverness of your children. Then I saw the last photo. I laughed so hard, I nearly fell out of my chair. Thank you!

Love the pumpkins and I have to say the last frame gave me a giggle too! :)

oh seriously? that was hysterical! and you know i like sarah. so dang funny. i nearly "blew" coffee too. i am showing doug as soon as he gets in here. you CRACK me up!

tell the kids fab pumpkins. i am so impressed.

Love the pumpkins and love how you repurposed Claire's pumpkin! Eeeeeeeeeeeeeeeek!

Jiggly puff IS so last year.. its all about kirby this year.