I'm in a couple of magazines -- "on newstands now!" Well, not me, actually, but my artwork. Even better!

Here is my little quilt, Garden Letters, as the Exemplar in the January/February issue of Somerset Studio. I am so thrilled to be published in this inspiring magazine. What an honor. 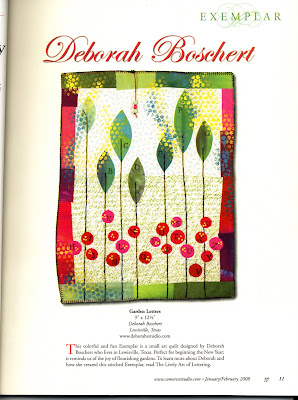 And here is the lovely little write-up they did about the quilt and my process. The theme for this issue is "green," and I created the quilt specifically in the hopes that I might be chosen for this regular feature. (You can see another picture and read about how I made it here.) 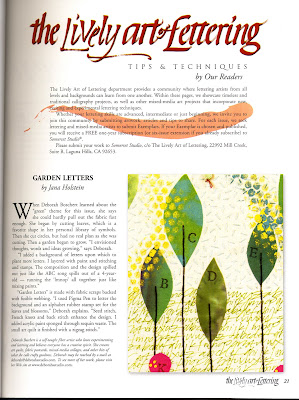 In fact, it's the second time I've been featured as the Exemplar. You can read about the other time here.
When the editor notified me that I'd be in Somerset Studio, she suggested I submit some work for Altered Couture and Belle Armoire. Well, I'd be glad too!
I fused up a collection of casual springy clothes and sent them off. Here is my denim skirt and matching pouch in the January/February issue of Belle Armoire. 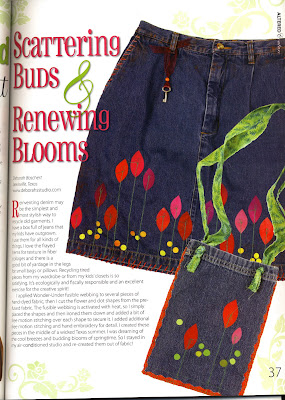 There are still some more pieces which will be published in the upcoming issue of Altered Couture. I'll keep you posted when it arrives!
And then there was this! 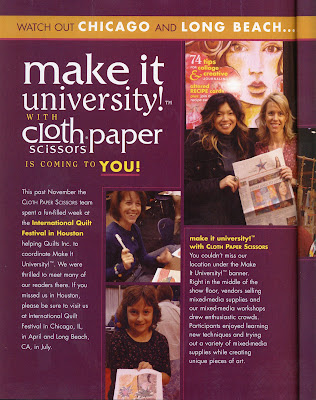 Many of you recognized my smiling face in this ad in the new issue of Cloth Paper Scissors. Apparently, I was pretty excited about that white pen. 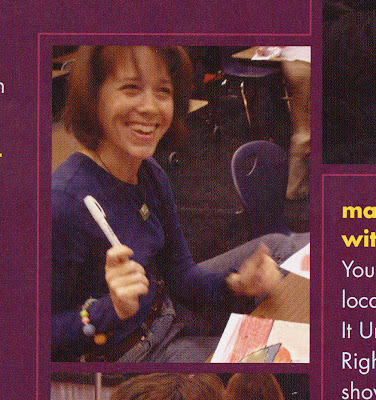 This was taken during a workshop led by Traci Bautista at Make It University in Houston. I really was having that much fun.
Posted by Deborah Boschert at 10:14 AM

Of course you're having that much fun -- it's a great pen! Just kidding; but congratulations on all the ink! Your work is super and it/you deserve the attention. You must be walking on air right about now.

I *knew* that was you! (Well, I was 99% sure.) I love how you look so happy doing what you're doing. And congrats on the great pieces published... I will need to save up all of them so you can autograph them for me when we meet in person one of these days!

Congratulations on the mag article - looks great. Not so easy to get hold of in the UK unfortunately.

I get CPS and thought it was you in the ad!

I did see the Somerset Magazine exemplar and the ad in CPS...hooray for you! Can I have your autograph?

Deborah! How awesome! That's very exciting! Emily will probably not want to talk to me any more at all now, since her mom's best friend is SO COOL AND SUCCESSFUL AND FAMOUS!!! :) Lucy

Deborah - it's great!! I picked the mag up Friday night @ the book store and flipped thru it and started to put it back - and then I saw your wonderful little quilt. Hope to see it in person some day.
Your use of letters inspires me.. Pam P

Well aren't you little miss somethin'! I am so excited for you. I love how all the various work just shouts "Deborah!" Cute picture at Make It University.

Love the quilt and your photos show just what a happy person you are. Your work is inspiring.

I have to find a copy of that issue of Somerset. Good for you!