I've had these pictures uploaded to my blog for weeks. They've been waiting in the draft file. Since Tre recently announced that he is leaving Abacus, I thought today was a good day to share this amazing meal.

Who's Tre? Well, if you are not a Top Chef fan, you may wish to just stop here. Tre was a contestant on the last season of Top Chef which ended a few months ago. Everyone agreed he was kicked off way too soon when he took the lead on a particular challenge and wasn't able to come out on top. Actually, I suspect his early departure turned out to be a huge benefit to him -- it made for a dramatic story and he has been doing all kinds of press and media since then. (Maybe you saw him on the Top Chef Holiday Special where he came in a very close second and was fantastically gracious about losing.) He is leaving Abacus on January 1 to "pursue other opportunities." Well, good for him!

Jeff and I are big fans of Top Chef as are my parents, so when they came to visit in October, we decided to go to Tre's restaurant, Abacus, for dinner. We felt a bit like crazy fans. Even a bit giddy when we saw him working away in the kitchen.

Gosh... get to the food already, right?

Once we were there, the waiter convinced us that the "only way to eat" was to order the nine course Chef's Tasting Menu. Well, of course.

Obviously, I won't be able to give you the beautiful descriptive introductions that the waiter did. You'll be lucky if I can remember anything other than, "Uh, Yum."

We started with seared tuna and a tempura sushi roll. Those sauces are so much more than just decorative. Delish. 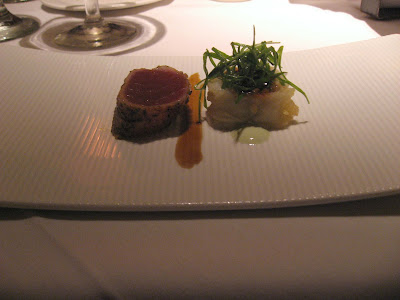 My mother was most impressed by this first course. She was amazed that she liked it. She is definitely not a fish kinda gal. The biggest thrill of the tasting menu is that we all tried things we might not have ordered off the menu.

My photos are pretty awful. I turned off the flash because I didn't want to seem too conspicuous.

Hmmmm. I'm not sure what this is. Another fish course, I think. Isn't it pretty? 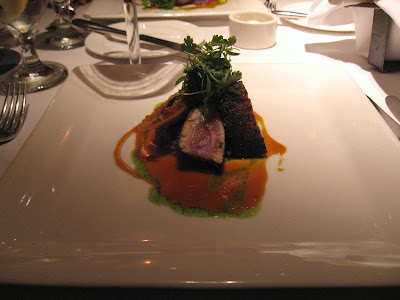 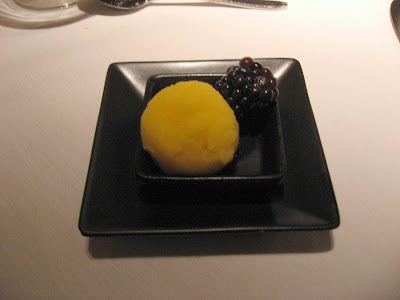 Oh my goodness, my mouth is watering just looking at this picture. This was my favorite course. It was divine. Halibut sitting on a corn ravioli sitting on asparagus with champagne soaked baby tomatoes and another amazing sauce. 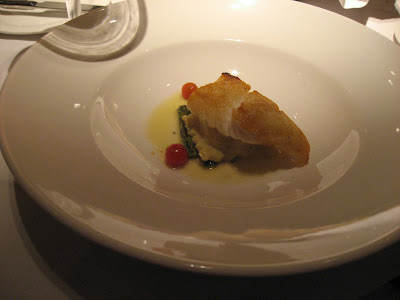 This is "pork two ways," I think. On the bottom left is pork belly. Toasty and rich! 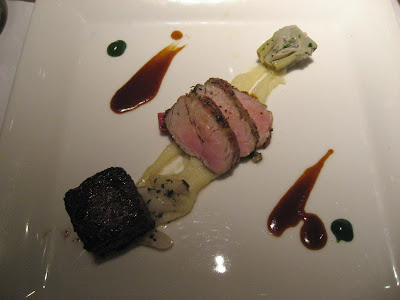 Oops. I forgot to take a picture of the duck coarse before I ate nearly every bite! 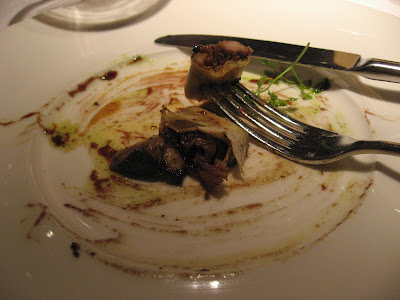 This plate included fois gras which I'd never had before. Too rich for me, really -- let alone the bad feelings it conjures when you know how it got to be that rich. But, I'm glad to have experienced it. The duck spring roll was fantastic. There was a third preparation of duck on the plate and I'm sure it was also spectacular.

Nine courses is a lot. Can you believe we still had three to go?!

In fact, I was almost too full to enjoy the buffalo and Kobe beef. (I think there are some mashed potatoes under there too.) 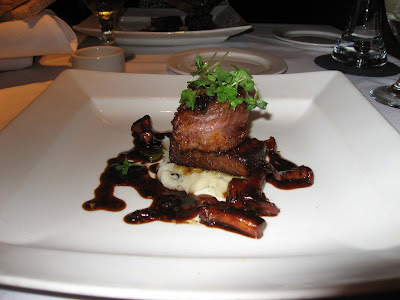 As the waiter was bringing this plate to the table, one of the stacks tipped over and it was quickly rushed back to the kitchen for repair. In fact, the service was perfection. Every detail was carefully considered. 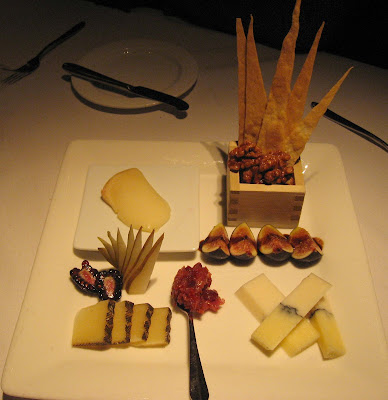 Also figs and pears and some kind of berry and crispy giant crackers. Yum. I don't think I've ever had figs before. Why not? They are delish. I must look for some when I go to the grocery store today. 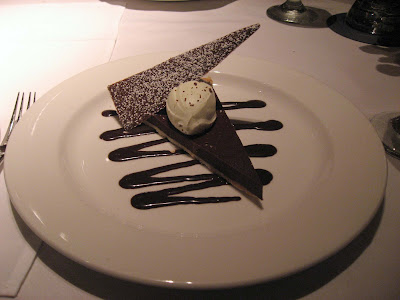 I am all about dessert, baby. But I'm not sure I enjoyed this as much as a humble bowl of home-made brownies and seasonal peppermint ice cream while watching Project Runway. You know?

It was such a wonderful meal and a delightful experience. An enormous splurge for us and well-worth it.
Posted by Deborah Boschert at 9:16 AM

OMG That all looks soooooo good. I used to occasionally eat like that before I got married and had kids. i kinda miss it. Seared tuna --yumm! I'd probably pass on the pork if I knew the buffalo was on it's way -- that looks divine! I had ostrich once in DC and it was to die for, although I don't know why I'd connect buffalo with ostrich (maybe because they are both off the beaten track). I have a hard time with figs because of teh texture they look like they have, but a friend of mine buys this most amazing cheese with partially dried figs on top and it is heavenly. Oh, I'm drooling now. Cheers to you guys for treating yourselves! And thanks for sharing :-)

I lovwed Tres. I love tasting menus - small exquisite bits of cuisine. You are too young to appreciate fois gras!! :) I love it.

How cool! I would be giddy too. I'm drooling a bit myself...just realized it's almost one and I still haven't fed myself.

Oh! I bought myself an early Christmas present yesterday...a needle felting machine...SO addicting...I want to felt anything and everything at the moment. We'll have to plan a "play date" after the first of the year.

Deborah, That all looks so yummy! My brother John and I wonder how much does such fare cost you in Dallas? Take care!! :) Lucy