The spring soccer season is over. (It started at the end of February. Spring?!) But it was a great season. Claire's team played in the finals of the U-8 league. (That's under 8... as in 6 and 7 year olds.) The game went into double overtime and ended up in penalty kicks. So exciting! And pressure-filled! Claire played goalie and was able to stop nearly every kick that came her way, but the Blue Tigers lost by one goal. Oh my goodness, the tears were flowing... even from Coach Jeff. The girls made big improvements this year and MORE IMPORTANTLY are showing such thoughtful, enthusiastic spirits. 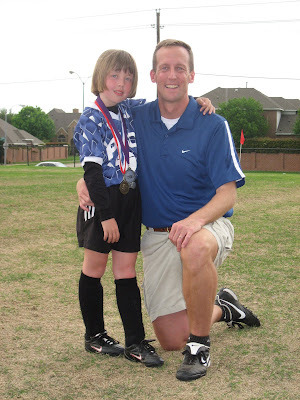 Claire is a great goalie! Every time she turned around after the game there was another player or parent or coach telling her what a great job she did. The coach of the other team said Claire was the best goalie in the U-8 league. She was a bit overwhelmed by the attention -- especially since they still lost.

She'll move up to U-10 for the fall season. That will be a big change. In the meantime, I need to register her for a soccer camp this summer. It will be good to mix in some soccer with the sleeping in, the swimming lessons, the travels, the library summer reading program, Vacation Bible School and playing at the pool.
Posted by Deborah Boschert at 9:34 AM

So funny that your Spring soccer has just ended when ours is beginning this week! Katie is playing U-12 this spring but will move up to U-14 for the fall! Goalie is such a tough position - good for Claire that she did so well!! Congrats to the team for a great season!

We have a couple more weeks of soccer here. Isn't it fun to watch the kids improve over a season? Congrats on getting into the championship game.