Benjamin's birthday was last week. He's getting so big! And funny, delightful, smart, silly and FIVE! We've been collecting the Spiderman comic books that have been stuffed in the Sunday papers for the past few months. So Benjamin is all about Spidey!

We even found Spiderman t-shirts for both of us! 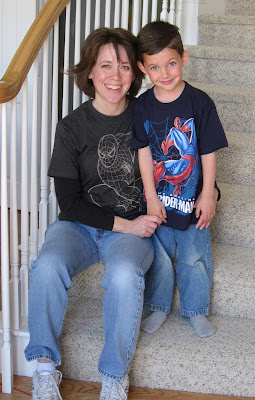 Party central! We had a house full of boys, games, cake and fun!

Jeff came up with the superfantasic idea of creating a giant web that the boys could unravel. 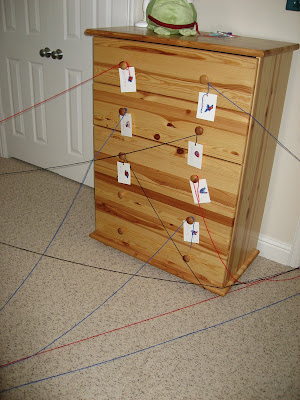 They started in Benjamin's room... 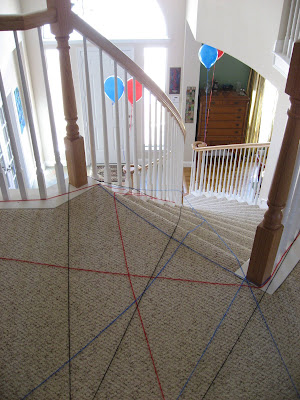 It's probably not safe to run a bunch of yarn up and down the stairs. Oh well, fun though!
After the web was unraveled, each boy got web shooter (silly string)... 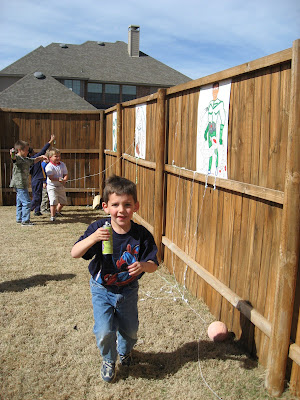 And they attacked all the bad guys (posters made my me and Claire).

It was a serious battle. I was stunned that the boys shot the web only at the posters and not at each other. (Maybe that's for seven year old birthday parties.) 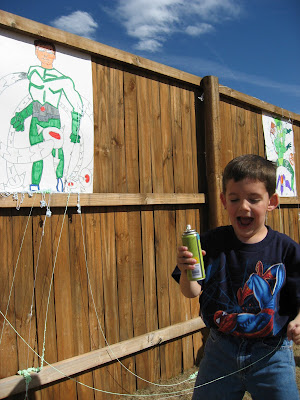 I love decorating birthday cakes! Check out this masterpiece. 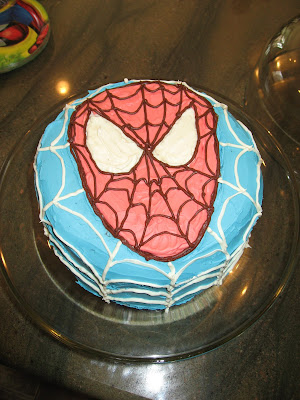 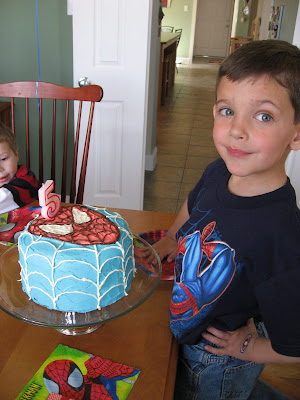 What does a five year old wish for? 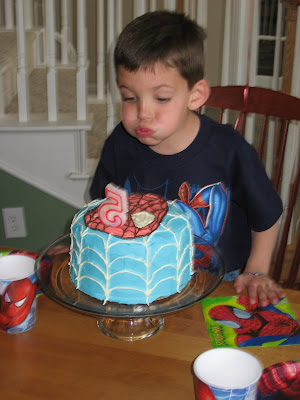 Jeff got me the Betty Crocker Bake and Fill Cake Pan set. I saw it on tv and thought it was a most excellent invention! I haven't perfected the combination of ingredients. This is chocolate cake filled with some kind of crazy ice cream. 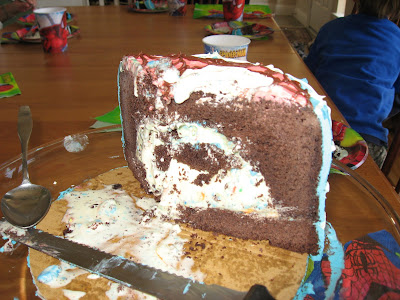 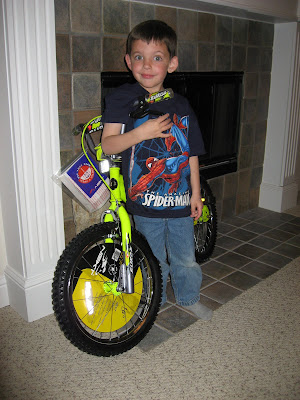 The first week of March is birthday central in our family! Grma and Grpa visited for the celebrations. (Yes, those are Spiderman pajamas.) 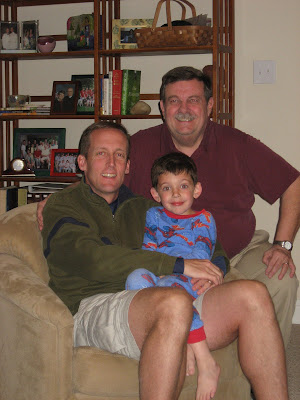 The "Bake and Fill" recipe we used for Grpa's birthday was a big flop. I didn't take any pictures, but I promise I'll blog details sometime soon. Maybe I'll save you from the same tragic fate.
Tomorrow is Jeff's birthday. I have a tried and true recipe for that celebration.
Posted by Deborah Boschert at 4:37 PM

OMG, what fun party ideas!!!!!!! I LOVE the web, and the silly string prizes, and the targets. You guys rock!

I can NOT believe how grown up Benjamin is! His birthday party looks like it was loads of fun and the web idea was fantastic! Happy Birthday to Jeff and Benjamin and Grpa!

This is so great. It brings back memories of when my daughter was 5 (she's now 26). She was seriously into He-Man. Seriously into him. She insisted on a He-Man haircut, and wore He-Man underpants undeterred by the fact that they only came in "boy style". We had to finally discourage the obsession when one night she picked up a fork at dinner, shouted, "By the power of Grayskull!", and stabbed me in the arm!

Deborah, when I pledged my sorority we wound up yarn and at the end of each of our skeins, we found our pledge mom. That picture brought back memories! (I suspect the whole event was funner for Benjamin than it was for a bunch of 18 year old girls!) Happy Birthday to all the Boschert Celebrants! :) Lucy

You have made my day - wonderful and loving pictures of my family! I have my Grandma Kathy fix for today!

The cutest pictures ever! I have a secret desire to own my own can of silly string that I could whip out of my purse at the most unexpected moment. Oh, to be 5 again.

Looks like you all had a grand old time. Wonderful theme ideas. Your little man is soooooo very cute!
It also seems like all the men in your life have birthday in the same month or week!
Happy belated.

Can you be my mom? Deborah, what a swell party you threw! Thanks for sharing. I like the follow the string idea. What terrific memories you are creating!

I've said it before when he was 4, Ben is the CUTEST. I love those ears. He is gonna make all the girls crazy for him.

And your dh is adorable too. sigh...