We had a weird winter in Texas. Or at least that's what all the locals say. At any rate, it's been sunnier, warmer and less windy lately. Great for walks to the playground! 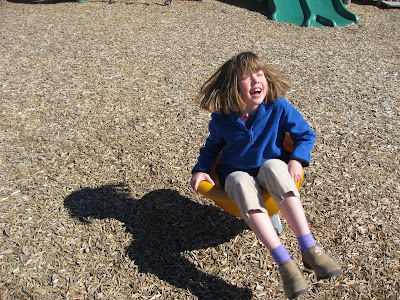 The kids both like these wild spinning mushroom things. They are balanced in such a way that once the spinning momentum gets going, you can barely get out. 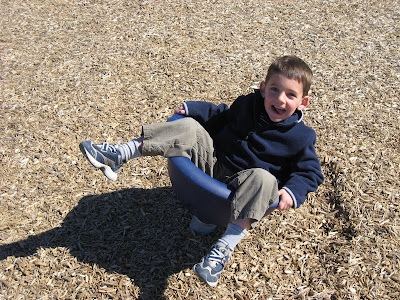 It makes me dizzy just watching.
Brief Updates:
I finished sewing the binding on long skinny while watching the Oscars (which I thought were generally boring -- though I thought Jack Black and Will Ferrel's number was quite funny). I'm still planning to paint the surface of long skinny a bit -- but if I don't get to that, at least it's bound.
We watched The Prestige last night. It was really good. It was constantly compared to The Illusionist since they are both about magicians at the turn of the century. Jeff and I both liked The Prestige much more -- more character development, more twists, more suspense, etc. If I had nothing else to do, I'd totally watch it again now that I know the "trick."
But since I have tons to do... like prepare for having friends over for a little brunch, and then boys over for a birthday party and then family visiting for the weekend... I shouldn't even be blogging!
Posted by Deborah Boschert at 9:31 AM

That mushroom thing does look like fun. My best friend used to say "Sit and spin" all the time. I bet she would just love this.

Everyonje tells us the same thing about Portland weather this year! It has snowed more than I want to deal with!! Hey, I haven't heard from you in ages, Have you been over to visit my new website and blog? Inquiring minds need to know.

I hate that the new blogger won't supply a link to non-blogger blogs anymore!!

Will have to see The Prestige. I need to vegetate some!