This is not the kind of "cooking" I normally do in the kitchen, but it sure was fun!

Claire was flipping through a kids' science book and wanted to try an experiment with an egg and vinegar. You put in the egg in a glass and cover it with vinegar and eventually the acid in the vinegar eats away the calcium in the shell. It really was quite interesting and we were left with the soft, thick membrane holding the white and yolk of the egg. Of course, this had to be punctured, just to see what would happen. Then we had an eggy, vinegary concoction.

Claire thought it would be interesting to drop in some of the mini-marshmellows we had used earlier in making toothpick towers. Benjamin eagerly joined in at this point.

Then came the genius idea of picking the candy off the dried up gingerbread houses and adding them to the (gross) mix. Here you can see the vinegar/egg base on the left and the gingerbread getting ready for demolition. And two big smiles! 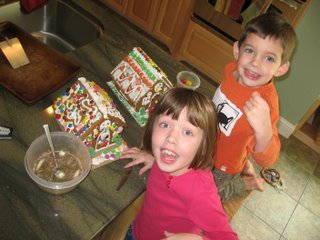 The candy pieces all sunk to the bottom, so Claire insisted I take this picture so we could see every little detail. 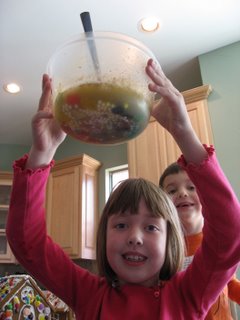 They discovered that after the gumdrops sat in the "stew" for a bit, the sugar all disolved which made them look like shiney "diamonds." Hmmm. Sticky diamonds, I guess. 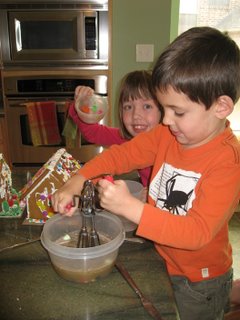 Out come the egg beaters. Later Claire found the pumpkin carving tools which were perfect for sawing through the walls of the gingerbread houses. This activity filled up nearly three hours of time (on Martin Luther King Day when they didn't have school). And the kids were giggling and working together the whole time! 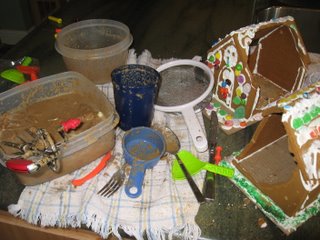 I cleaned up this gross mess. And let me say that vinegar and ginger both have very very pungent scents. I had to hold my breathe a bit. But it was worth it. It was one of those crazy times when everything just comes together to make big fun. Now I know we'll have to make gingerbread houses again next Christmas if not for the holiday decorations, but for the post-holiday "yuck stew."

Posted by Deborah Boschert at 8:29 AM

I so miss those days-I guess I'll have to wait for the grandkids to come along-unless I can talk Roger into staying home to play! James was home on Tues and we sat and watched Animaniacs and Pinky & The Brain-still funny!

Ewww, that is soooooooo gross! But way cool that it entertained the family for so long :-)

Brings back memories of when I let my kids play science experiment in the kitchen. It is cheap entertainment!

Funny how traditions get started, isn't it!? Sounds like a fun time! I'm guessing no one asked to lick the beaters after the mixing was done...

What a great activity! You can tell from Claire and Benjamin's faces what a grand time they're having! From time to time, when the fridge gets a bit too full with bottles and tupperwares with bits of stuff in them, I let Caroline make a similar concoction, and she ADORES that. (You know the last 2 tablespoons of an old salad dressing, the end of the corn that no one will eat, etc.) Great use of the gingerbread house goodies, too. Now you have a reason to say "don't eat that old candy, you need to save it for yuck stew!" (And by the way, wouldn't Yuck Stew be a great memory quilt about this?!

just imagine a lot more of that kind of thing and you would have homeschooling. so much of that type of play leads to so much learning. what would happen if...