It's hot in Texas. 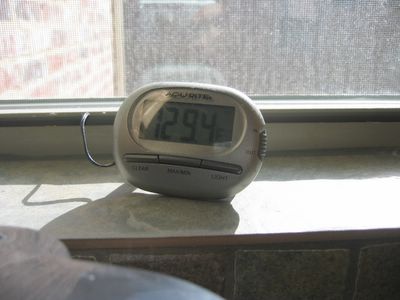 Ok... it wasn't really 129.4 degrees. The thermometer sits in the sun and reads funny. But, it is still measuring something and whatever it is, it's HOT. 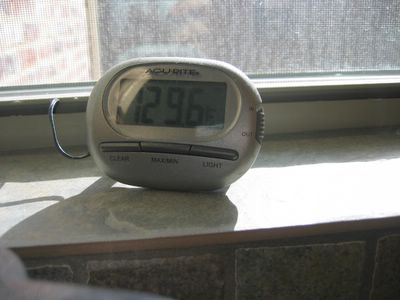 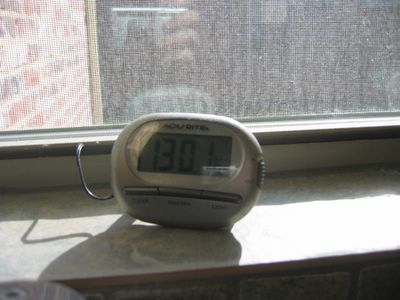 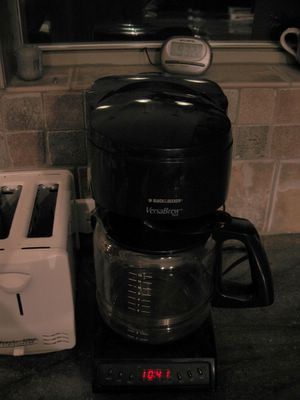 Actually, I was nearly overwhelmed in my first few weeks here in TX. Not necessarily by the heat specifically, but by how much people want to talk about it. I can't tell you how often I heard, "Is it hot enough for you?" Um... what exactly should my response be to that?

Eventually, I decided that I would try to avoid using the crutch of complaining about the heat to make small talk or even bring it up in regular conversation unless it realted to something real in my life -- other than just the fact that it's hot. And suddenly it didn't seem like such a big deal. Suddenly it's nearly the end of August and we've survived just fine.

I'm not saying I like it. I'm just saying that our words and intentional thoughts make a difference. Of course, I did just post an entire blog entry about it -- with pictures!
Posted by Deborah Boschert at 10:07 AM

As long as my Heat/AC works, I try not to complain because I can avoid it. I think all the talk about weather began before people could control their environments and has become an acceptable habit.

Atleast it's not controversial... and those around you share the same experience.

Debra, just remember I warned you. However, since everything is air conditioned, we usually survive. Plan on a little break in September which will fool you into thinking the worst is over.....not true..the heat will rise again until Halloween. We have never had a Halloween that the kidlets didn't have to wear jackets over their costumes....but when winter comes, you will love it. Sounds as if you are adapting quite well to 106 in the shade.uxflhom

Yes, what Gabrielle said - it can get really hot in October - at least it did in CA.

This week-end, my outdoor thermometer registered 117° so you win! Today it will not get above 72°.

As long as there is relief from the extreme heat or cold, it's not really that bad is it? And like anything else, it's all how you look at it. Hot days (hot days in New England...few and far between...) spent by the pool eating ice cream cones are really not that bad. However, if we had a long summer like you do we'd become a bunch of roly poly Cooks!!

That is so funny that you took pictures of the thermometer's changes. When we had our hot spell, I looked at my indoor/outdoor and it said 129 and I freaked. Then I realized that it was measuring how hot it is *inside* the little box that sits out in the sun. Complaining about the weather is just a universal conversation starter, hard to be controversial (unless you mention global warming to some people).