Just a few thoughts on this holiday weekend...

Quilt News
I am thrilled to report that my quilt "Patina of Radiance" was accepted for the Au Naturale show at the Tims Studio and Gallery. It's smallish -- just 14.5 x 9.5" 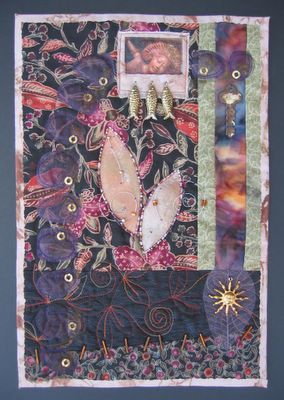 I'm equally thrilled that fellow Frayed Edge Sarah will have a quilt in the show and that my new friend and Dallas-local, Becky Howdeshell, will also be exhibiting. Oh, I'm in such good company!

Rock Star Follow-Up
Remember way last summer when several of us in the blog ring (Deb, Deb, Sarah and others) were all ga-ga about Rock Star INXS? I was entranced by JD Fortune at the time and he went on to win the show and make an album with INXS, which I own and enjoy. Well, they came to Dallas last week. I'd considered buying tickets, but Jeff was going to be out of town. So it just didn't happen. Then he came back into town a day early (in time for the concert), but it still just didn't seem like an opportunity that was going to come to fruition. I think my rock concert days are waning. (Though I never was a big concert goer even when I was younger.) Then I read the review of the show the next day in the paper and I was filled regret. The reviewer said JD "commanded the stage like he's been doing this as long as, say, Mick Jagger. He's got swagger, personality, vocal chops, attitude, abandon and just enough ants in his pants to keep him moving." I really should have called a sitter, coughed up the big bucks for the tickets and grabbed my hot husband for a night of singing and dancing. Oh well.

House Guests
I'm also delighted to report that Grpa and Grma returned to our home last night --- very late after a very long drive. And they brought Jeff's sister, her husband, and their son and daughter. It's a big Fourth of July party, family reunion, slumber party, fest! We've got ten folks in the house for the next five days. You can bet there will be lots of game playing (Uno is my personal favorite), good eats, and waiting for your turn on the computer.

I found red, white and blue pajamas on sale at The Children's Place so all the kids match! Too cute.
Posted by Deborah Boschert at 10:20 AM

Congrats on the show acceptance, Deborah! Yay you!!

Are you going to watch the newest version of Rock Star that's starting soon? I'm going to at least give it a try and see what I think the first week or two, even though I don't like Tommy Lee nearly as much as I like INXS.

What a beautiful quilt! It sounds like a fun long weekend at your house! Got room for 5 more!?

Woo Hoo! Congrats to you :-) Have fun this weekend and make everyone trweat YOU like a rock star!

I'm so happy that you got another piece in a Ricky Tims show. Have a great fourth!

Great quilt! and yay on the acceptance.
Sounds like a fun weekend..

but now the real question: will you be watching the new RockStar SuperNova? Or even (is it The One?) on the other channel?

I was completely unaware of INXS before the show last year, so I might watch (depending on if it conflicts with something like Project runway).

Deborah, what a beautiful piece of art!

Congrats on the show acceptance. I forgot all about it but, even if I hadn't, I have been so busy with the wedding quilt, the class sample and the charity quilt I just didn't have time.

I will probably watch at least the first episode of Rock Star Super Nova if, for no other reason, because Jason Newsted is a local boy. But I'm really not big on reality or talent shows....

Your patina piece is great. I love the leaf shapes and transparencies. Congratulations on getting in the show.

Congratulations, again!!! That Timms Gallery has such good taste. I watched the rock star thingy last night. I have formed no memorable opinions yet. I could only bring myself to watch about half an hour of it.