We had a super fun family picnic at Benjamin's school yesterday. He goes to "pre-school" three mornings a week. It's a delightful place and Benjamin has really blossomed this year. His school is in an old farm house. The couple that run the school live in the house part and the barn parts are all renovated to be the school. 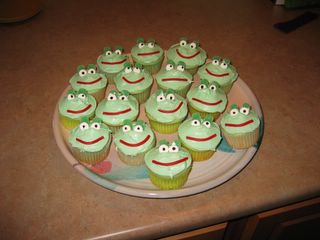 They were a big hit. Jeff said there were even some tears shed by kids whose parents were not quick enough (or wise enough) to snatch a little froggy before they were gone. Of course, you know Benjamin loves greeen and froggys. So this was a fun project for all of us. Of course, I was left with a huge bag of gumdrops -- less the green ones. I promptly threw it away because that's the kind of junk that gets eaten just because it's there not because anyone likes them.

Benjamin got a year-end certificate and was awarded the "future stand-up comedian" title. He tells really funny knock-knock jokes. And even more important than that... he generally thinks everything thing around him is giggle-worthy.

The yard at Benjamin's school is amazing. You can get a bit of a sense of it here. That's Claire and Benjamin getting ready to ride the mini-roller coaster. 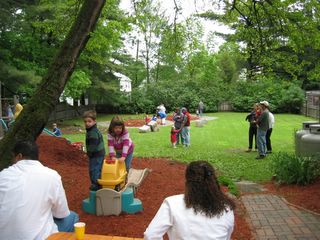 There are two nice swingsets, rocks to climb on, vegetable and flower gardens, a secret path, sand box, water table, mulch mountain --- tons of potential for getting dirty and "developing gross motor skills."

I made two fabric postcards as year-end gifts for the teachers. You'll see those later in the week.
Posted by Deborah Boschert at 12:09 PM

Wow! I love the froggy cupcakes! I want those for my birthday!

Great cupcakes! What a fun and creative baker you are! Takes me back...Jen

Those froggy cupcakes are TOO cute! I might've cried at not getting one too. :-)

I'm in love with the froggy goodness. What a great Mom you are! Your children are lucky to be loved so much, and to be immersed in such a creative atmosphere. Yay you!

Love the cupcakes! Too cute!