I finished the tree house quilt! 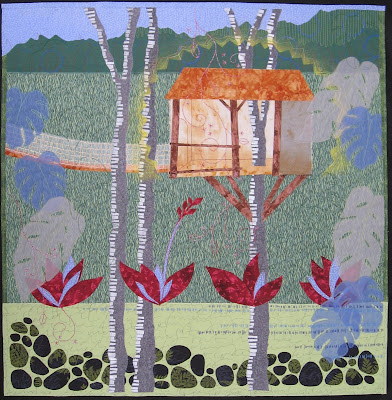 After seeing the SAQA sponsored special exhibits in Houston, I challenged myself to work toward creating art quilts to enter in SAQA shows. When SAQA announced Sense of Adventure as one of their shows for 2011, I decided to get to work.

When I think of adventure, I remember with great joy and excitement the zip line adventure my family took in Antigua in summer 2009. Unfortunately, we were not allowed to carry cameras on the tour, so I didn't have photos for reference. I turned to google, flickr and other internet sights for inspiration and found an image of a tree house at the very same site where we did the zip lines. I loved the shape and structure of the tree house combined with the lush colors and textures of the rainforest. Though this seems like a deviation from the zip line concept, it was a series of connections along the same idea and I decided to follow it.

I made lots of sketches (which I posted here) and pulled lots of fabric. I did some surface design and looked at more photos for reference. I started by constructing the tree house. I was pleased with how it turned out. It's more realistic than I usually work. 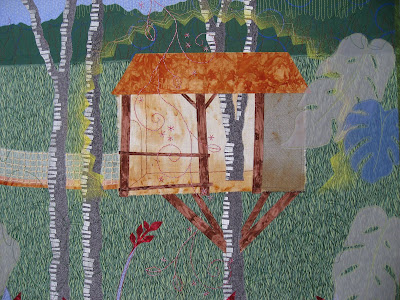 Then I set it in the trees and added the rope bridge. There was not enough contrast between the gray trees and the green background, so I added the white painted edge as if the sun is shining on them. I really love that edge and the long wavy lines of the trees.

I haven't done rocks in a while, so I went back to that beloved shape as the foundation for this piece. They are made from a beautiful black aloha fabric with green ferns. I got it in Hawaii. (Another adventure.) 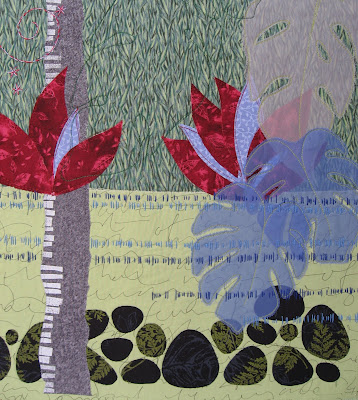 In the last few steps, I added the sheer leaves and the hand embroidered vines. 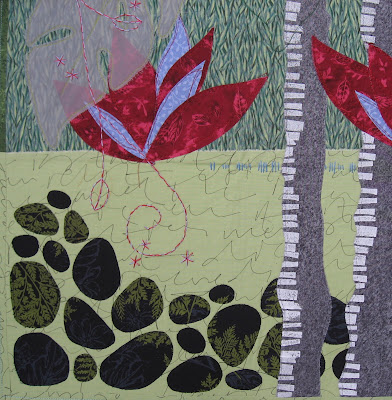 I'll be honest and say that at several points along the way, I was really stuck. Eventually, I realized I was not going to be able to finish it in time for the Sense of Adventure deadline. So I let it pass. Then... SAQA extended the deadline. This was a sign to me that I must press on. Which I did. I finished in time to enter. I'm really glad it's done. I'm glad I didn't just fold it up and let it sit even though it was a huge challenge. I was rejected from the show, which is not surprising to me. I don't think I was ever able to fully recover from some of the problems that I came across with this particular quilt. It's not my very very best work in my personal estimation, though there are many things I like about it.

I think I will enter it in Tactile Architecture which is a special exhibit with the International Quilt Association. I've been in Tactile Architecture twice before and it's one of my favorite collections of work. I'd be honored to be included again. I think it's ok to still put it out there even if it's not a complete success. I suspect if everyone showed only the work they deemed to be absolutely fully conceived and executed, we'd see a lot less art.
Posted by Deborah Boschert at 10:11 AM

I like this very much. I love wonky trees, as you know, and these are delightful!!

This is wonderful.
I love the graphic quality you bring to your work.
Deborah

The trees and treehouse are nice...more realistic than your usual work; I like the piece and am glad you're entering it somewhere else...it may be more successful than you think.

Good for you for forging ahead and working this one out. There is a lot to like about it. I particularly like the rocks (great use of aloha fabric, which i now have a soft spot for) and the trees which look almost sparkly to me! I think it would look very good in TA with those bold colors and shapes. Good luck.

I really like this piece a lot. I hope it finds an exhibition because my guess is, lots of people would love to see it, too. It's joyful, fun and has so many interesting elements to it. I'm curious to know what you're not 100% happy with. I can't imagine what I'd change about it.