I finished cutting out the remaining continents for my freezer paper stencil. It was a long and tedious job made tolerable by podcasts of This American Life, The Moth, Transom and Doug Loves Movies. (I wish Radio Lab would release some new episodes.)

Some of these pictures are dull and poorly lit, but they represent the process. Since lots of you commented (Thanks!) that you enjoy process shots, here we go.

I didn't feel like venturing out on Sunday to buy new fabric for the background, so I started auditioning fabrics for the various plane parts. Here's a swatch sample along with a pile of fabrics to consider. Also the beginnings of my Wonder Under templates. 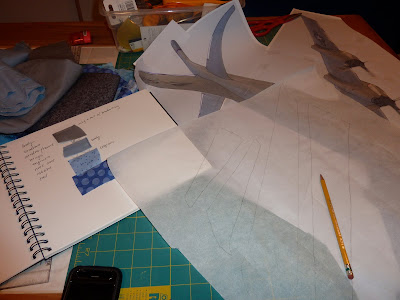 I traced the plane parts from my giant pattern onto the WonderUnder. I trace onto the fusible side rather than the paper side so I don't have to worry about flipping the image. Plus, then pencil lines are right on the back side of the fabric after I peel the release paper off.

As you can see here. 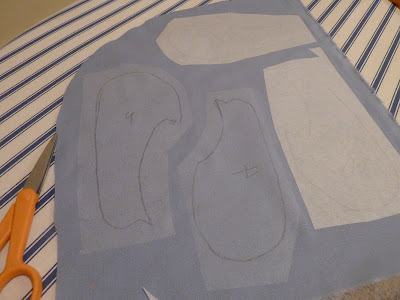 I've peeled the paper off two of the engines and it's still on the other two. I've also numbered the engines so I can figure out where they sit. Of course, the numbers are backwards, but I can read backwards. I'm sure you can, too.

I added scribbly, loopy, stream-of-conscious, handwriting to the wing sections, but didn't take a picture of that. Then I put the giant pattern on the ironing board, put a piece of parchment paper on top and placed my pieces over that, lining them up with the photograph. 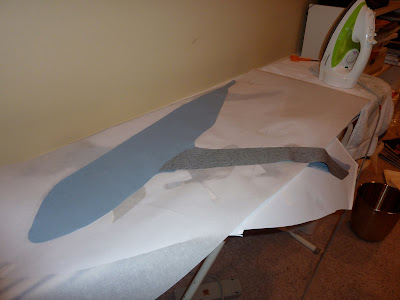 At this point, I've decided to go with just the gray and the blue fabrics rather than any of the commercial prints that I had originally considered. And... I'm not feeling confident. 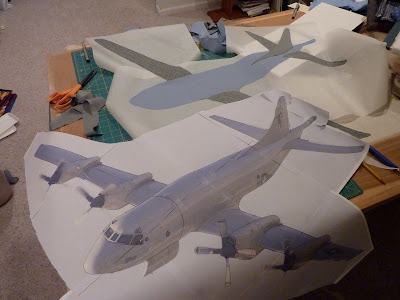 I want it to look like a quilt. A fabric collage. A piece of my work. But not too predictable. And yet still recognizable. So I quit for the day and watched the MTV Video Music Awards.

This morning, I remembered Sue Benner's advice to just commit. And I got out the paint and bubble wrap. 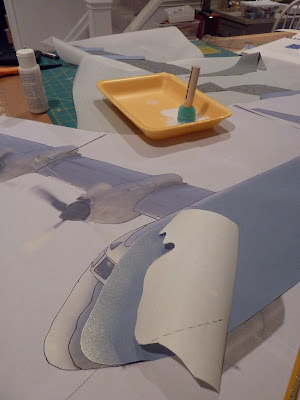 I added a reflection area on the nose of the plane. Even though I like my work to appear somewhat flat, I think this gives the plane some needed dimension and a bit of interesting surface design.

Then I added a bit of stamped/painted bubble wrap to the edges of the engines and tail. 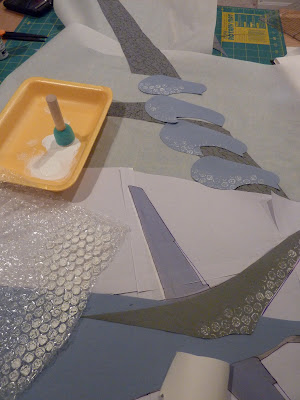 I stenciled two more "reflection" lines that I traced from the giant pattern. With the freezer paper stencil... 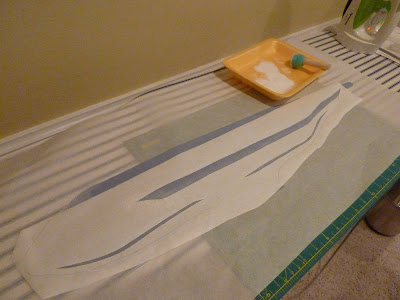 and after I peeled the stencil away. 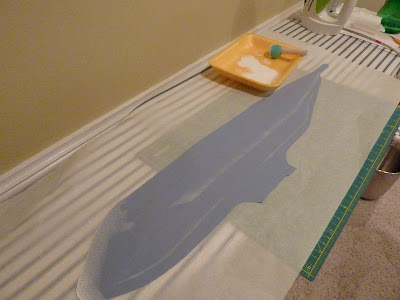 At this point, I figured I really needed to put it all together and hope for the best. Up to now, I'd been carefully avoiding fusing any pieces to each other so I could switch them out if needed. 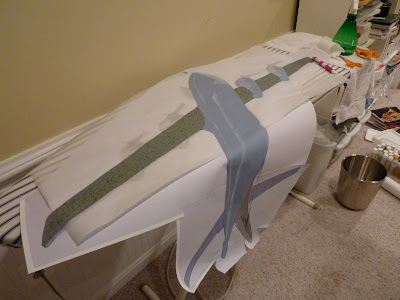 I think it's ok. Obviously, it still needs windows in the cockpit and propellers. I don't know much about flying, but I'm pretty sure those are essential. 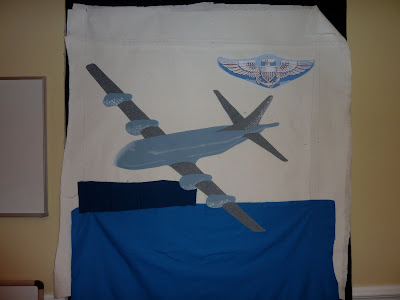 You can see the background shades I was considering. I think I'm going to get some dark Navy. Originally I had chosen a beige/tan. But I have a plan for those aviator wings that are sitting in the top right corner and beige wouldn't work for that.

Next Steps:
Cut out windows, propellers and other detail pieces.
Stencil map.
Posted by Deborah Boschert at 11:23 AM

You are flying now!!

Love the stenciling and stamping!

The dimensional stamping and stencilling really helps the plane. It still looks very graphic, but now it's more "finished" looking. I could see using more obviously commercial fabrics in small doses for the details that are still on your list. I think you are right in needing something like that to make the "quilty" connection as opposed to making a realistic plane picture that happens to be made out of fabric.

What a great project and way to celebrate your husband's career! Your plane is looking great -- and I really enjoy the process pics. Can't wait to see where it goes from here!

I like that it's becoming more "Deborah". The details will make it yours and a flying success.

It looks so three dimensional already!!