At the end of July, I was reading various blogs, email lists, calls for entry and other art quilt stuff and I came across a project called Thread Tails and Vapor Trails, a quilt contest to honor the 100th anniversary of Naval Aviation. Well, I had to enter, right? (My husband is a Navy pilot and it's a big part of the adventure we've shared together as a family.)

When I discovered the contest, our entire house was packed up on a truck and I knew I wouldn't be creating any art for awhile, but the deadline is October 1, so I felt like I would have time once we got somewhat settled in Maryland. And then the first week in September sneaked right up on me and I am finally getting to work!

I've read various "process pledge" blogs lately. It seems trendy to share step-by-step images of projects. It is interesting to see how others create and it will be nice to have a record, so I'm going to share some pictures and ideas over the next.... ummm 19 days. (Yikes.)

I started by making a list of images, elements and techniques that I might want to incorporate. I also gathered lots of pictures from the internet and from Jeff's various flights and travels. 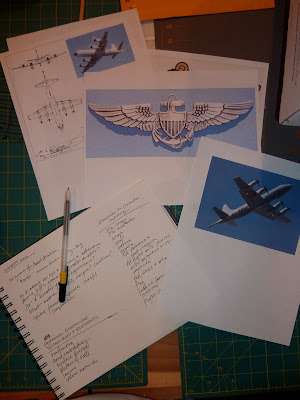 I often make lists of what I anticipate including in a quilt, rather than actual sketches. But, I am not particularly confident with this subject matter, so I did make several sketches. Maybe that will help avoid some indecision or missteps along the way. Quilts are required to be 40x40, so it's probably a good idea to have a plan.

Ultimately, I decided to make a big P-3, the plane that Jeff flies. I used PosteRazor to upload the image, print it out on several pieces of paper and tape them together. 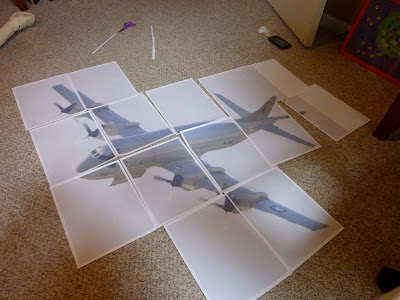 I also decided to create a world map along the bottom of the quilt. I pinned the plane and the map up on the design wall. 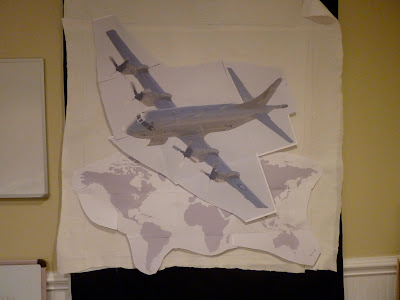 I'm cutting a freezer paper stencil of the map and I'll use paint to create that part of the imagery. Tonight I spent nearly two hours with my exacto blade. And I only did North and South America. 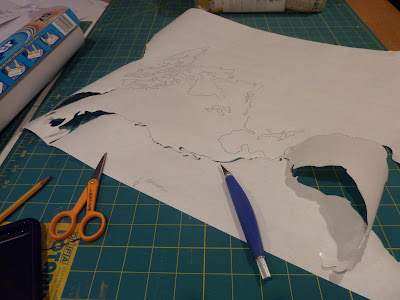 Jeff spent a bunch of time with me tonight explaining the various bumps, notches, dark spots, lines and shadows from my giant photograph. Did you know there are parts of the plane called the beaver tail and turtle back? Yeah, me neither.

I'm not feeling too confident at the moment, but I think it has potential. It's a bit of an odd project for me. I never make quilts with airplanes. I generally don't even do anything vaguely patriotic or historic or even realistic. It's a challenge to find ways to use my own artistic style and voice in such specific constraints. I really do want to honor Naval Aviation.

Next steps:
Buy new fabric for the background. What I originally selected is not going to work.
Stamp/paint a pattern on the background.
Quilt background.
Cut out Africa, Europe, Australia and Asia.
Posted by Deborah Boschert at 5:56 PM

I am so excited to see how this plays out. You don't do literal quilts, but I think this is going to be great and nice size, too.

Interesting challenge. I am looking forward to seeing how you express this subject matter in your own distinctive way.

I agree with the previous commenters in that this will be fun and interesting to watch as it progresses. Thanks for sharing your process.

good luck and I'm anxious to follow your progress. I'm also excited to know about posterazor because just the other day I was wondering how to do exactly this!!! Of course now I can't remember why :(

I can't see how you could have passed up this challenge either. It's kinda like a 12x12 challenge -- not always in your comfort zone but worth doing anyway for the personal challenge. I'm sure you'll figure out something great.

I looove process photos, so thanks letting us all "look in" on this one. You gave me a gift with that link to PosteRazor! I just got a phone call to cancel my 10am meeting, so I jumped into poster making via your link and voila! I'm going to spend the next hour playing with this! Thanks so much. BTW, It's been interesting to see this midcoast Maine area change as the Naval Air Station folks have all but left. Our favorite independent toy store (Red Dragon)closed, saying there just aren't enough young families throwing birthday parties since the airstation closed. Sad!!!

I can't wait to see how you work through this departure from your comfort zone. Thanks for sharing the process.

This is really cool, and more than a little inspiring!
Like you, my father was a naval aviator in WW2.
I love what you are doing with the idea!
Hmmm. When is the entry deadline? Perhaps I should throw my hat into the ring. I didn't know about this call for entry.
Leslie