Progress and Some Confessions

So I went out yesterday afternoon to buy background fabric for the aviation quilt. (Scroll down if you haven't read about it yet.) I actually rode my bike to the nearby quilt shop. 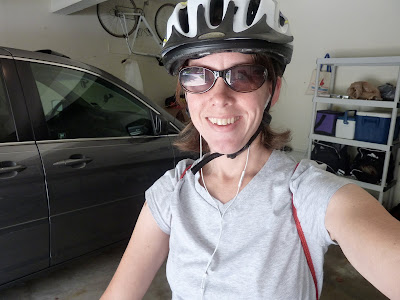 I think this is just fantastic. I also rode to the library. It was a beautiful afternoon and I'm feeling very thankful to be living here.

That's the second trip to the fabric store for this quilt. First confession: I don't have much fabric. Other quilters have fabric collections spilling out of their shelves, closets and bins. That's great. I just haven't gone about it that way. In fact, this is it. 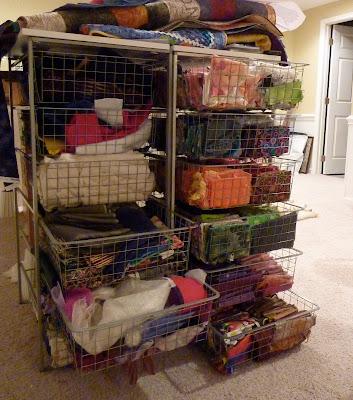 Though I am supposed to be talking about the process of the aviation quilt, I think it's notable to say that my process doesn't involve a huge stash. I think about what I want and what I need, then I go buy it. I'm not sure this is most efficient, creative, or open-minded way to create. But, it's how I do it. For now.

So I chose this marbled navy blue. I had always intended to stamp circles over the whole background. So I tested out a few paint colors. 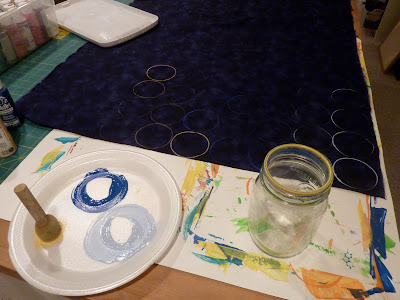 I also tested out paint colors for the stenciled map that will be painted on the quilt. I think I need an even darker green. (So I'll have to go buy some.) I think that's Greenland that I used as my sample stencil. 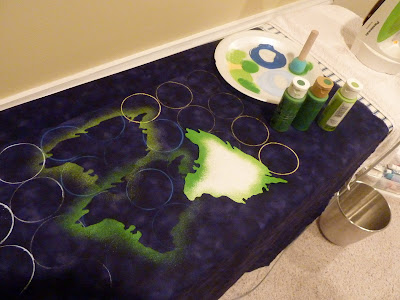 I chose the blue for the circles because I didn't want them to stand out to much. From close up, they'll be obvious, but from far away you'll mostly just see the plane. 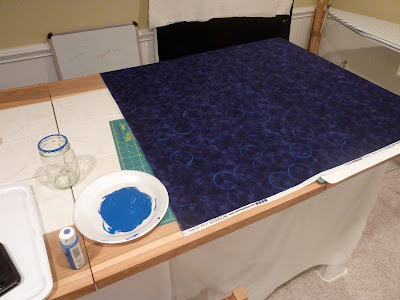 Very early in September, I put together the "quilt canvas" as Sue Benner calls her foundation. It's just a backing fused to batting. I used plain muslin for the back. I'm anticipating doing some hand stitching through these layers, so another more formal backing will probably be put on over the muslin later.

Second confession: I've been using acrylic felt as batting because I love stitching through it for hand embroidery. But... it's really not good for large quilts. It just doesn't fold or roll well. And I'm a bit unsure about it's longevity. I really don't know what to do about that. I've gone back to regular batting for this work, but I'm worried it's going to beard when I start stitching. Grumble. We'll cross that bridge when we come to it.

Next I decided to add some free motion quilting lines echoing the circles. I pin basted the background to the quilt canvas. I didn't fuse it because I want to preserve the texture I'll get with the quilting. I'm auditioning thread here. I'm considering the color of the background fabric, the colors in the plane and the paint colors. 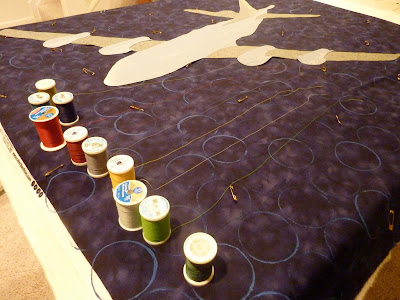 I chose one of the reds because it blended nicely against the navy. Again, I didn't want it to stand out too much. Plus, I'll be adding some red accents to the plane, so that will coordinate. Third Confession: I like Coates and Clarke thread.

Then I did a bunch of quilting, but I didn't quite finish the whole top. 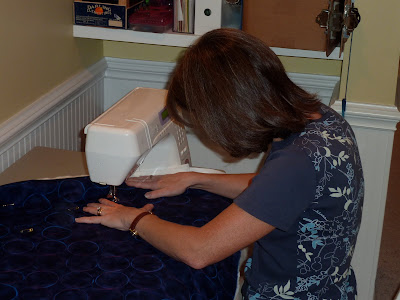 I decided to quilt at this point to add a layer of line, color and texture to the background. The plane and some other elements will be fused on top. I'll get a nice effect of painting over the stitching when I add the map. Then I will probably do some hand embroidery and some more free motion quilting. Then I'll just have to see what else it needs.

I love what you are doing. The circles are great and so you. I was a little afraid that an airplane quilt was just not going look like a Deborah quilt. I should have known better!

Have you tried wool felt for batting? I wonder if it would give you the same result as acrylic? I'm enjoying the process. Thank you for taking the time to share!

I'm loving your process notes! So interesting to see a quilt unfold in steps. Two questions: Are you then quilting first and then adding the airplane on top, that's very interesting! Second, how far away is the quilt store? How many miles, it would be wonderful to live that close to the quilt store, or maybe not good for my budget.

Thanks so much for sharing your steps... I enjoy seeing how things are created, I always learn something.

Atta girl for riding to the quilt store and library. I wish I could say I've been doing the same, but I hate the ride or walk back from anywhere -- all uphill.

I've not had issues with bearding and regular batting. I like a low loft cotton like Quilter's Dream.

I like your method of buying what you need when you need it. I'd like to work like that, but I think I've become accustomed to figuring out what I want as I work and wouldn't do well breaking my "zone" to get more fabrics. Does my stash count as big?

Thanks for sharing your process Deborah. I like wool felt for batting, no bearding and it stays where it should.