Claire and I (and Benjamin and Jeff) love John Green, author and You Tube celebrity. (I first blogged my love for John Green here.) We also love his brother Hank Green, You Tube celebrity and entrepreneur. So, in April when Hank announced a special event called Nerd Con, I bought tickets on the very first day to give to Claire for her 16th birthday.

The event was fully titled Nerd Con: Stories and focused on the power of narrative, a variety of creative guests and entertainment and was held at the Minneapolis Convention Center. 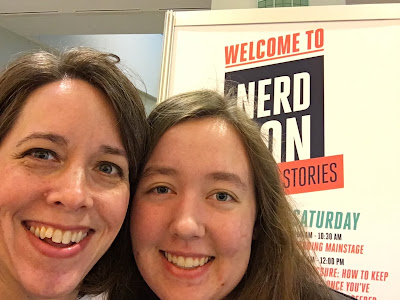 We had a great time! I'm not sure I really knew what to expect, but it exceeded our hopes! Rather than share a play-by-play, I'm just listing quotes from some of the events we attended. Some of them will not make sense to you at all. That's ok. NerdCon attendees will smile with knowing recognition. The event was full of inspiration. Maybe you'll get a hint of that here.

I wish I would have taken more notes, but I was mostly enjoying the moments.

"Stories and each other art the most valuable things that we have."
Hank Green, Opening Morning Welcome

"You gotta get through your spiders."
John Green to Maureen Johnson as she was avoiding taking questions from the audience

"I do this. I made a thing. I'm done."
Hank Greek, his analysis of living a creative life 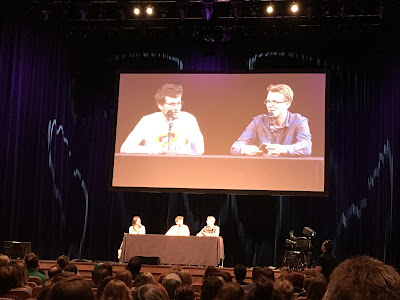 "Give yourself a slightly bananas deadline."
Sarah MacKey on getting stuff done

"What's standing in the way of your story going the way you want it?"
Sarah MacKey on Why Stories Matter

"There is grandeur in this view of life, with its several powers, having been originally breathed into a few forms or into one; and that, whilst this planet has gone cycling on according to the fixed law of gravity, from so simple a beginning endless forms most beautiful and most wonderful have been, and are being, evolved."
The last sentence of Origin of the Species by Charles Darwin as quoted by memory on the spur of the moment by Ben Lillie 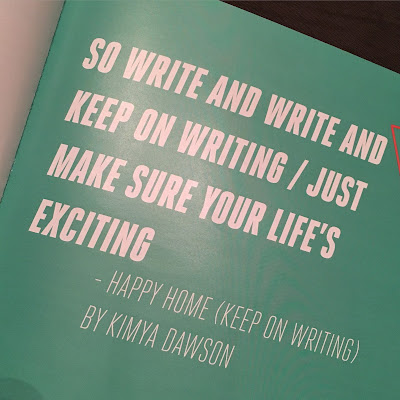 "Guacamole Illuminati that explodes when it stops moving." AKA Guacanati
Winner of the SuperFight card game

"Be sober. Be kind."
Dessa Darling on how to work well with others

"Better to have a long career than a big career."
John Green on success

"Bet on yourself. Don't assume that things are going to get worse."
Rainbow Rowell on continuing to work

"There is not only one right choice."
John Green on compromising

"It's late once, but it sucks forever."
Patrick Rothfuss on missing deadlines

"I could miss deadlines in the Olympics."
Also Patrick Rothfuss on deadlines 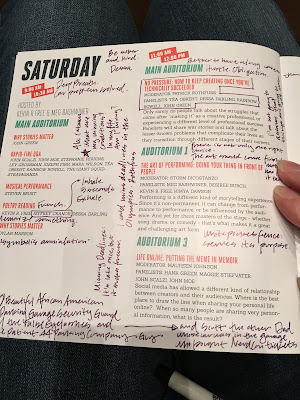 "I'm going to Snapchat that!"
Hank Green on seeing Claire's DFTBA letter jacket and Academic Decathlon patch (She was so excited!) 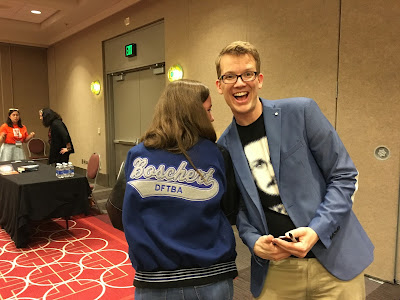 "We look like the Honey Boo Boo of the Universe."
Desiree Burch on the United States' various faults

"Everyone has their reasons."
Ana Alderstein on Why Stories Matter

"I forgot the words."
Hank Green, singing one of his own songs, seconds before the crowd prompted him with the next verse 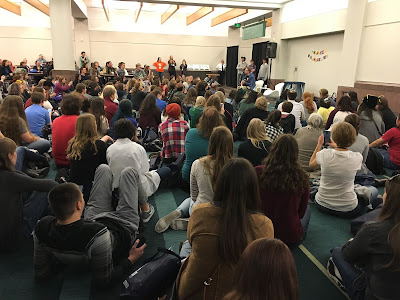 Lego covered in cocktail sauce.
Meg Bashwiner with the winning guess in the "What's in my Mouth?" game

"Your wish is granted."
"I know it is. I earned it."
Awesome Puppet Adventure

The closing event at Nerd Con: Stories was a performance of Too Much Light Makes the Baby Go Blind by the New York NeoFuturists. The group of eight performers attempted to perform 30 plays in 60 minutes at random as the audience shouted the numbers for the various play titles as printed on our program "menu." It was quite stunning. Provocative. Entertaining. Funny. Personal. The very best kind of ... stories. 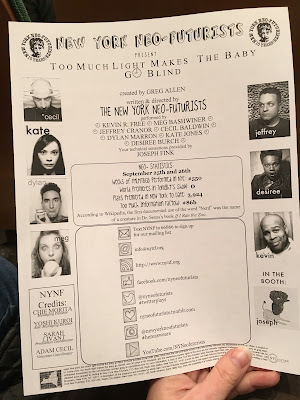 It was much to fast-paced and intense for me to take notes. If I had, I'd have many more quotes to share. But I wouldn't trade a page of notes for my singular focus and appreciation of the performance. And the whole weekend! 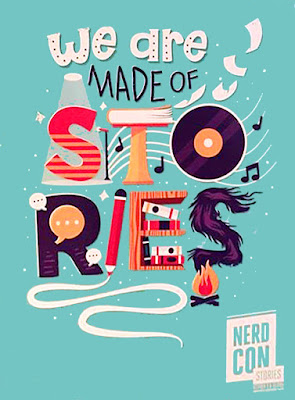 Posted by Deborah Boschert at 11:30 PM

I'm inspired just reading your blog today! I must remember to tell my story even if not as eloquently as the speakers at NerdCon. Ksm

wow..what a great 16th birthday present..and what a gift for each of you