A few more pictures and thoughts from the Dallas Quilt Show. My pictures aren't great. I apologize.

I love this fabric and paper small quilt by Linda Creagh. 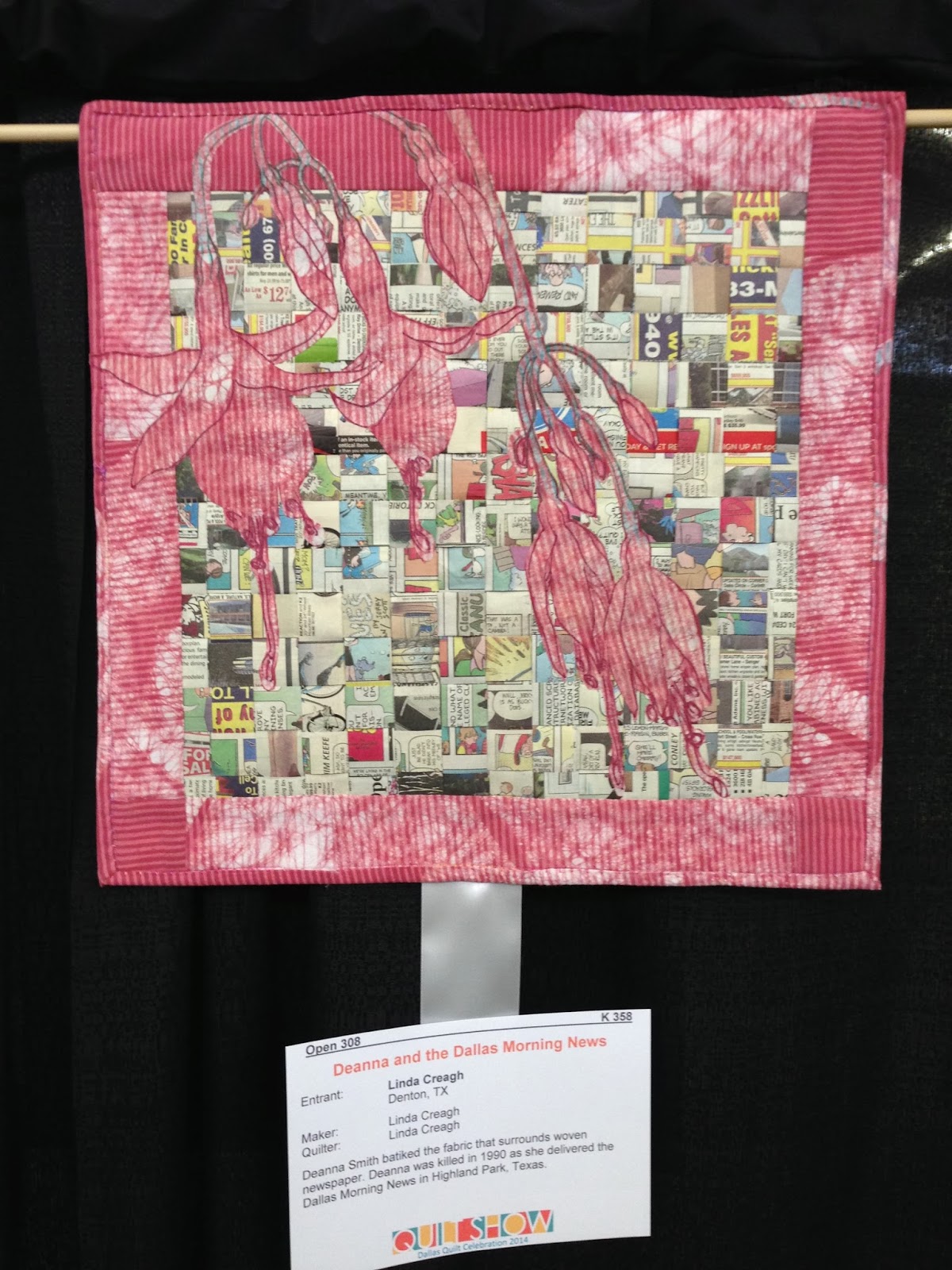 Her best friend died with delivering newspapers. So tragic. But such a lovely artistic memorial. 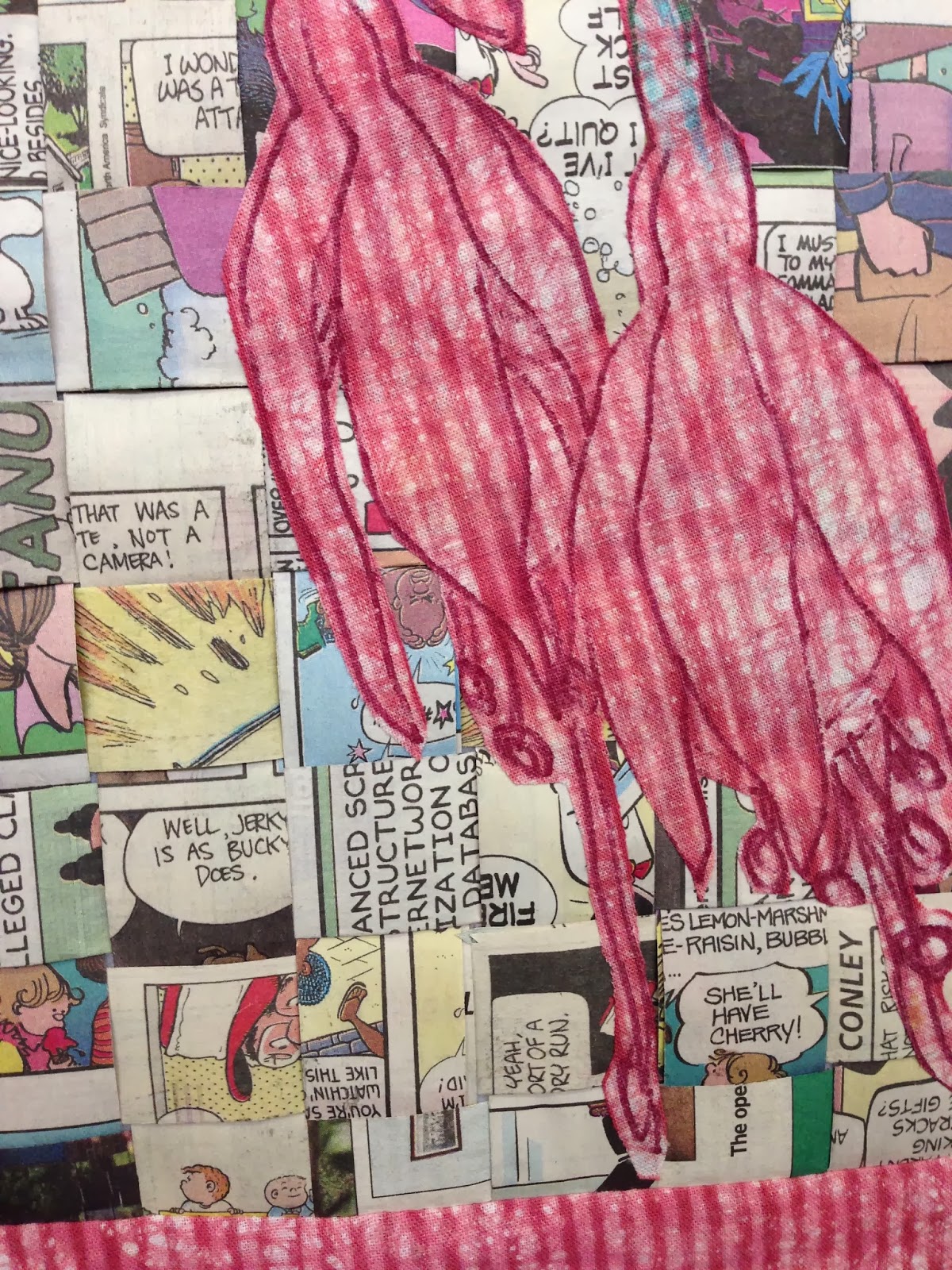 Here is the Best of Show by Cheri Meineke-Johnson and Linda Taylor. It's quite masterful. Cheri made it while her husband was going through cancer treatment. 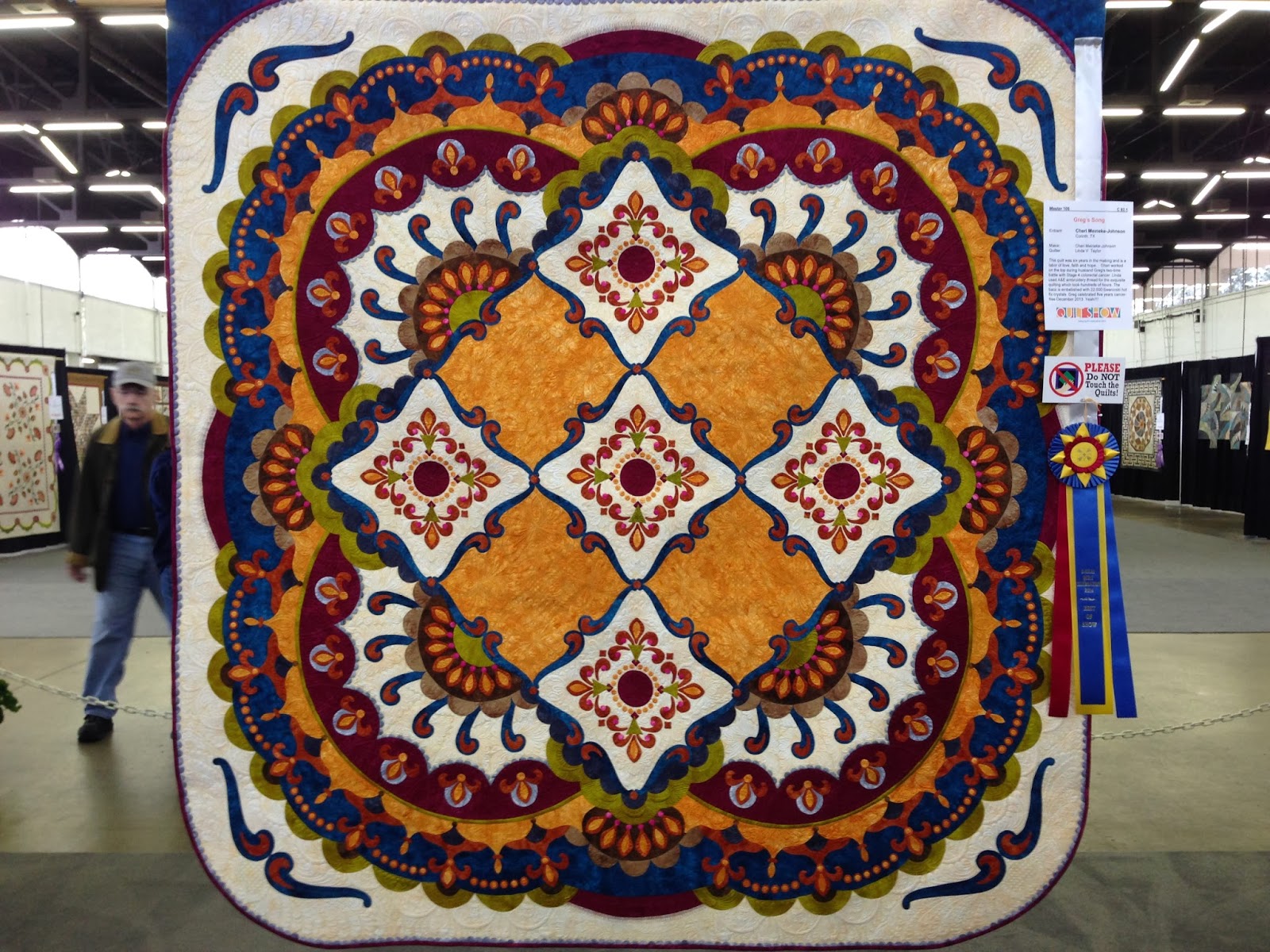 The back is embellished with 22,000 heat set crystals which she said represent "the light at the end of the tunnel." This is a close up of the back... the shimmery reflecting crystals don't really show up as well as they did in real life. 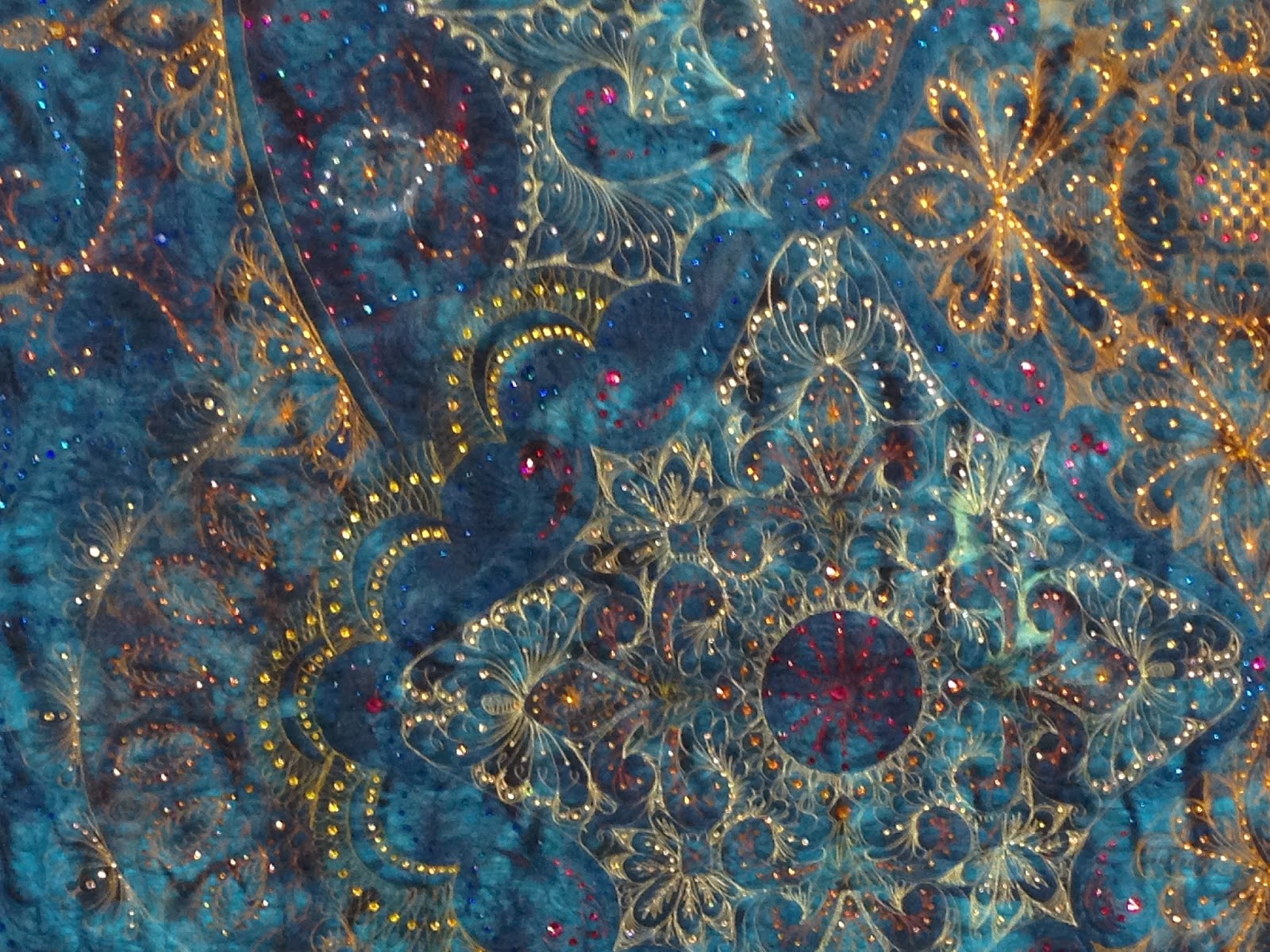 I just loved this asparagus block which was part of a larger quilt with several vegetable blocks by Laura McClure. 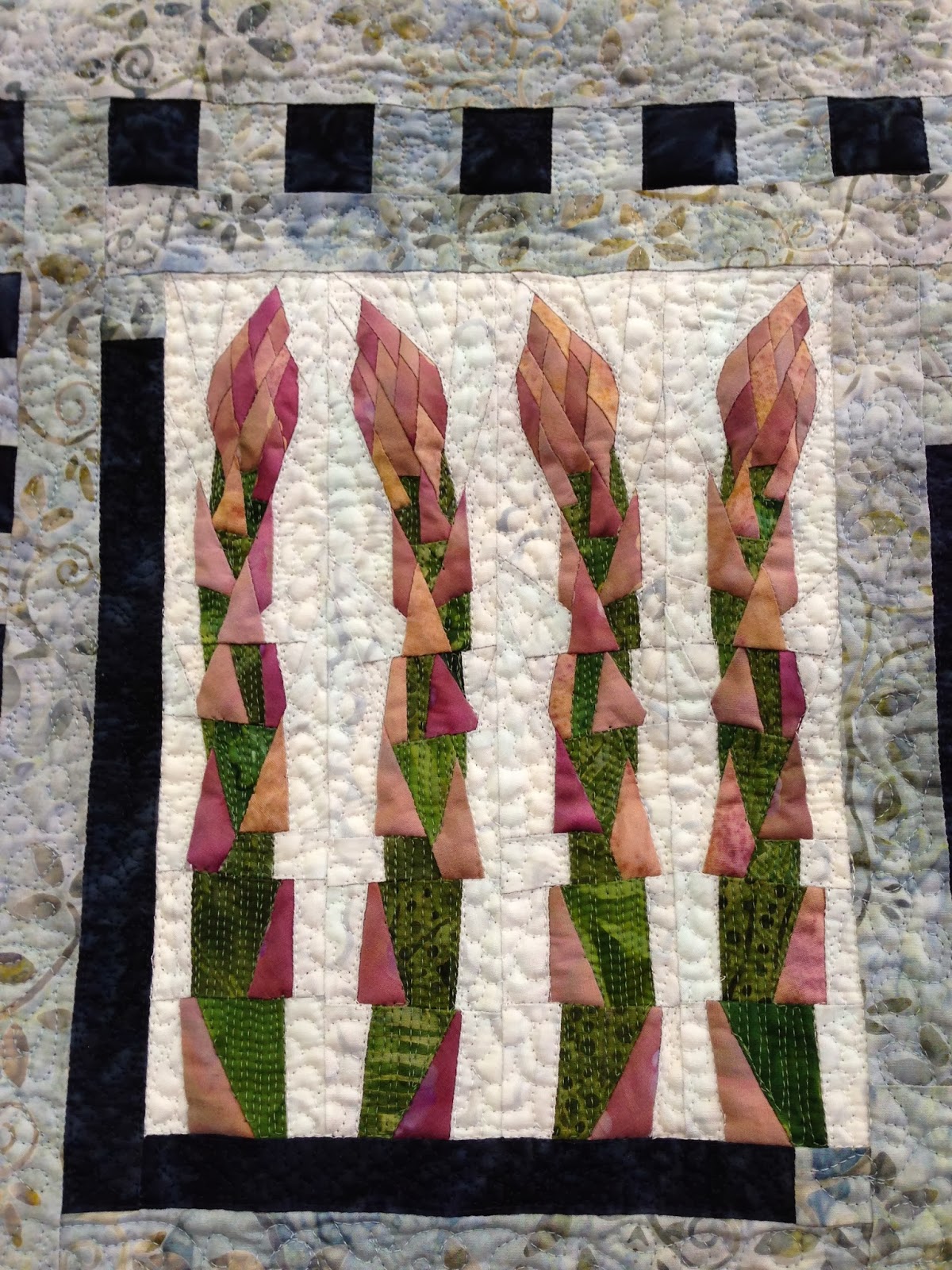 Every year the chair of the Dallas Quilt Show (a gigantic volunteer job), choses a show theme. This year it was Modern Quilts. There is a separate judged category with prizes specifically for the show theme.

Here is one of the modern quilts I really liked. 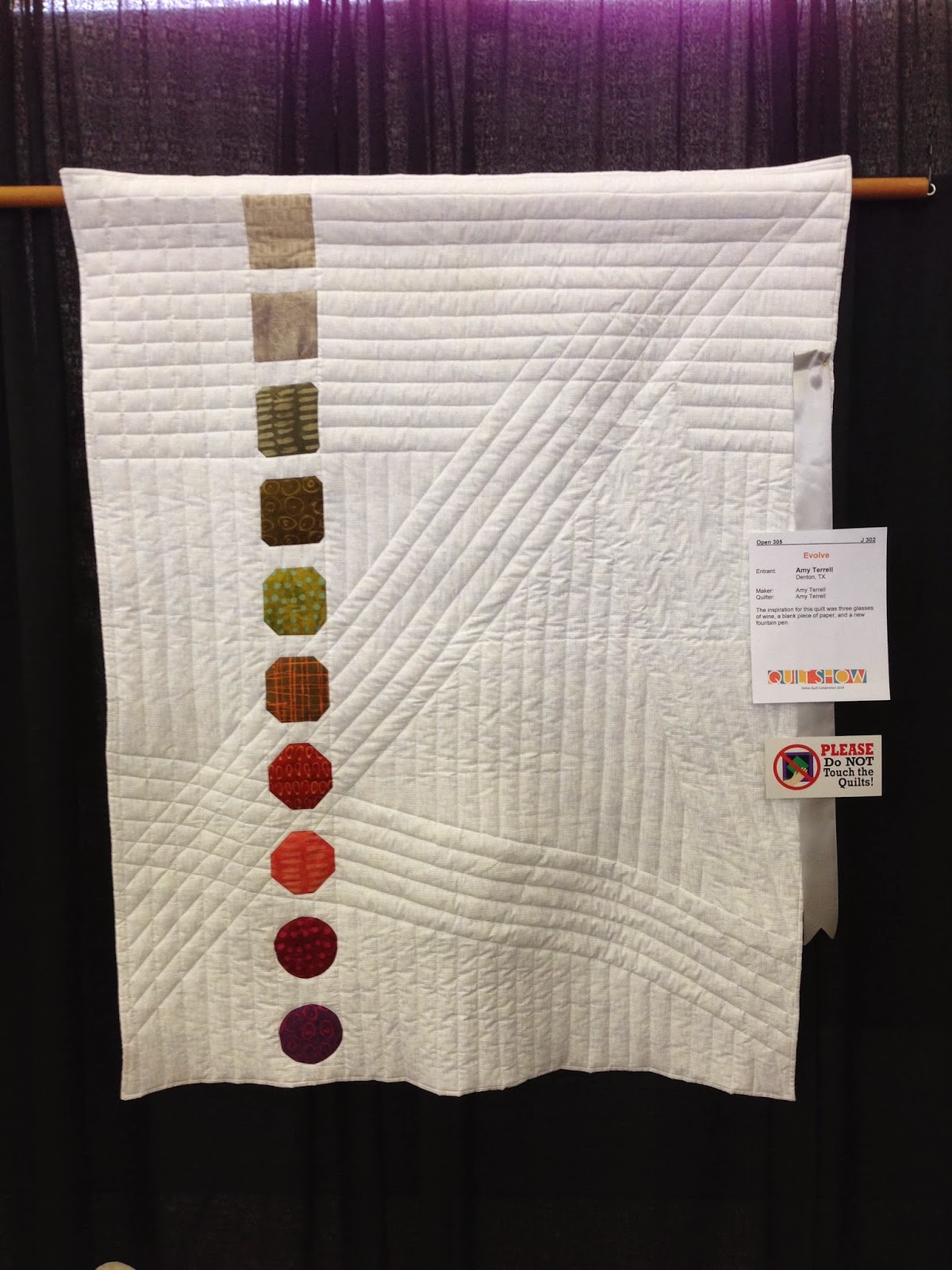 I especially liked the artist statement by Amy Terrell. Can you read it? It says "The inspiration for this quilt was three glasses of wine, a blank piece of paper and a new fountain pen." 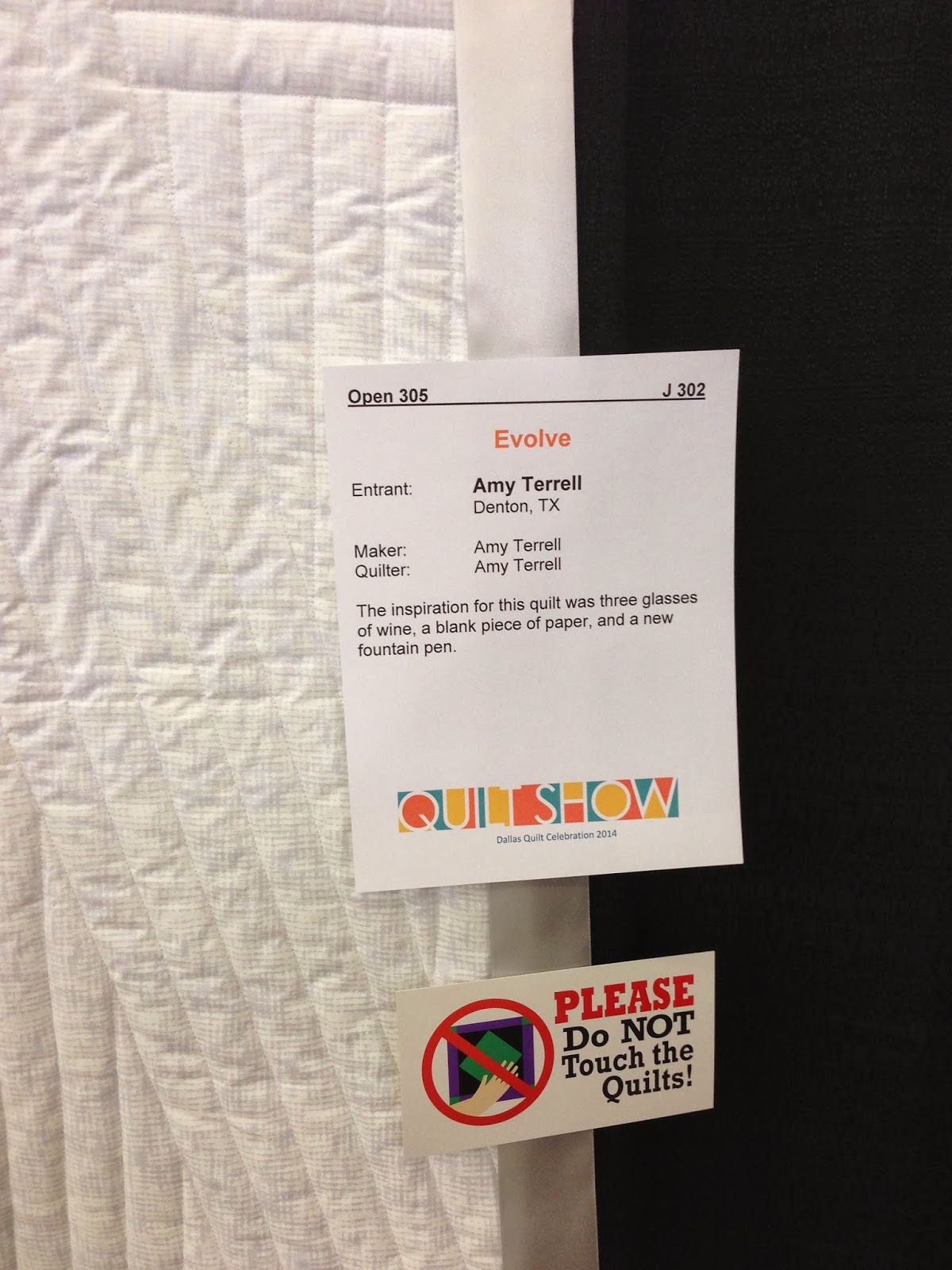 This quilt was made by Marie Zackowski who actually was the show chair this year. Hooray Marie! Great show. And a great quilt. Love the setting, color palette and simplicity of this beauty. 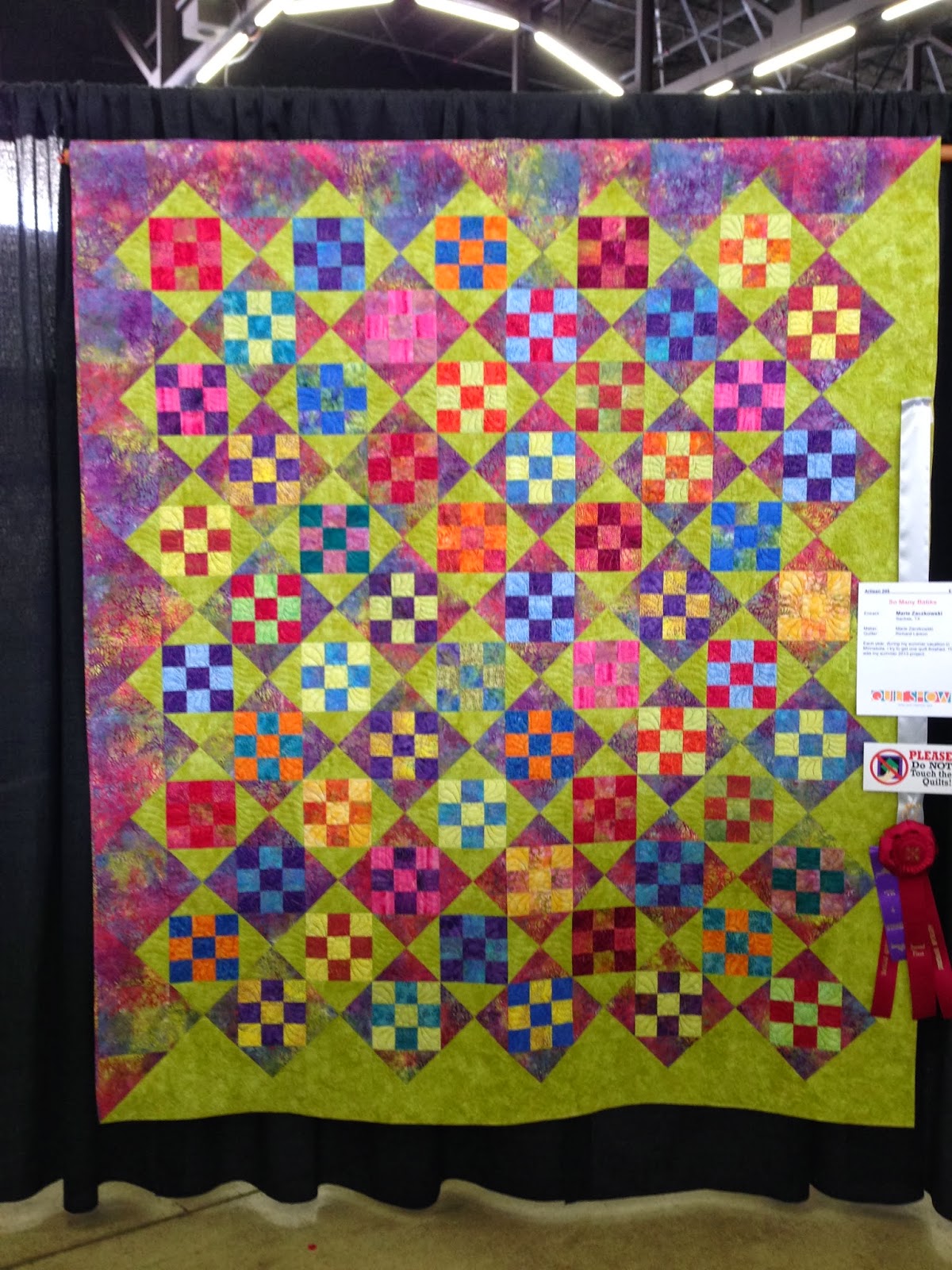 This quilt was interesting and shows the direction and possibilities with machine embroidery. It's called A Pocket Full of Paisley and was made by Lorilynn King. Each of those paisleys are designed by the artist, stitched on her machine, then composed and attached to the quilt. 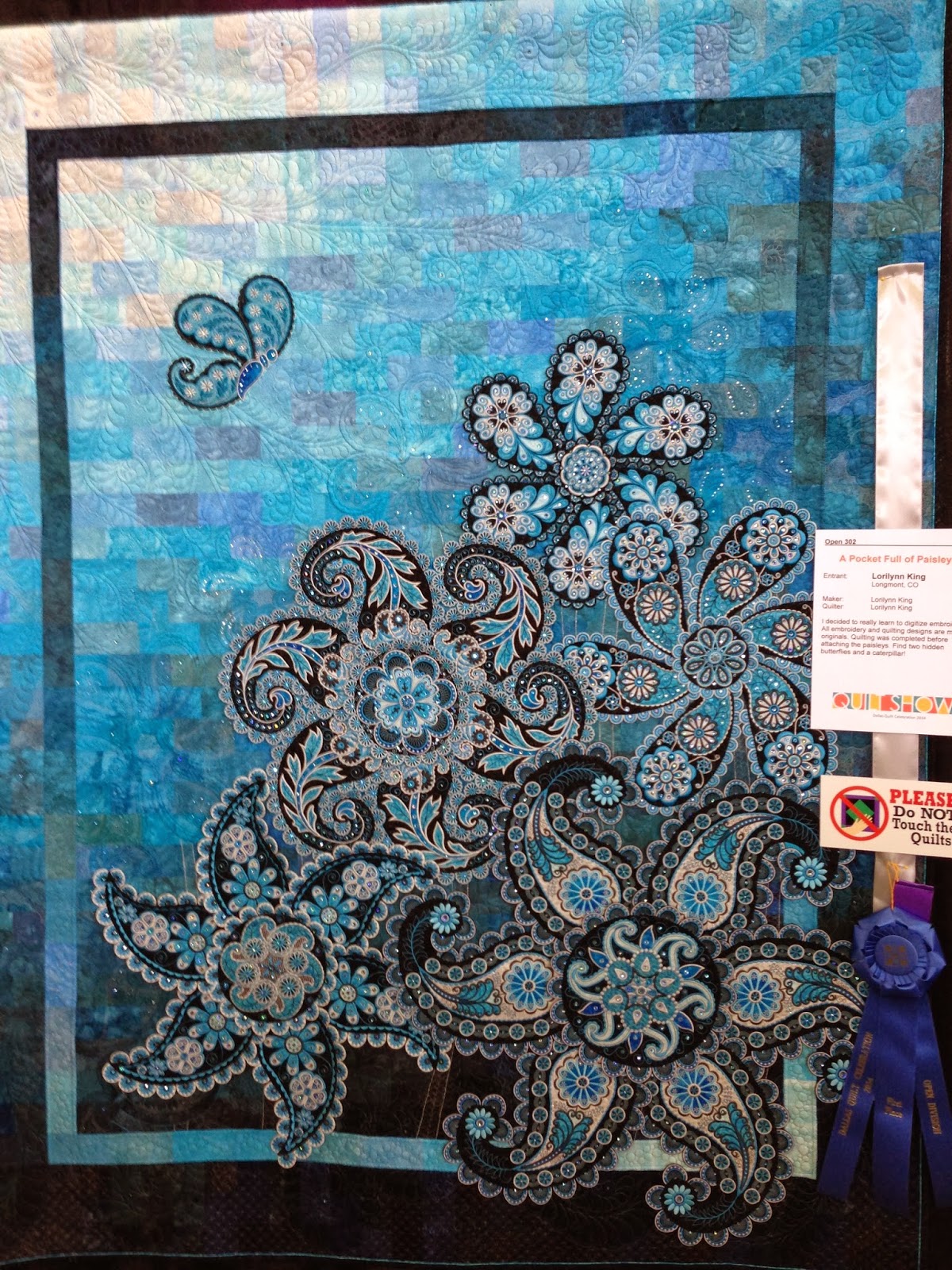 You may get a sense of the dimension of the quilt with this close up. It won first place in the "other techniques" category. 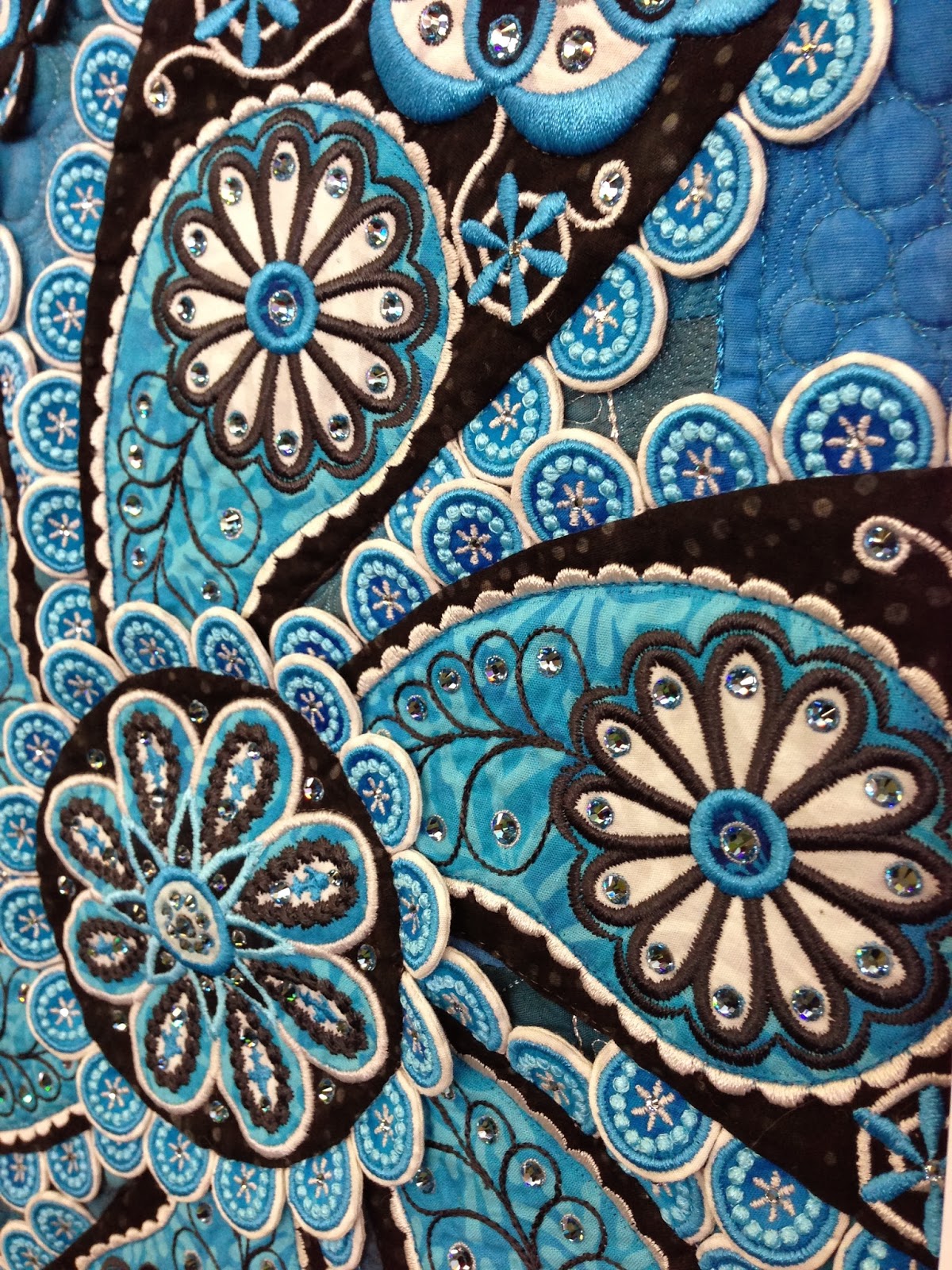 I really loved this medallion style quilt. It's called Ring Around the Mole and was made and designed by Shannon Conley. She says it features one or more mammals from each order native to Oklahoma. 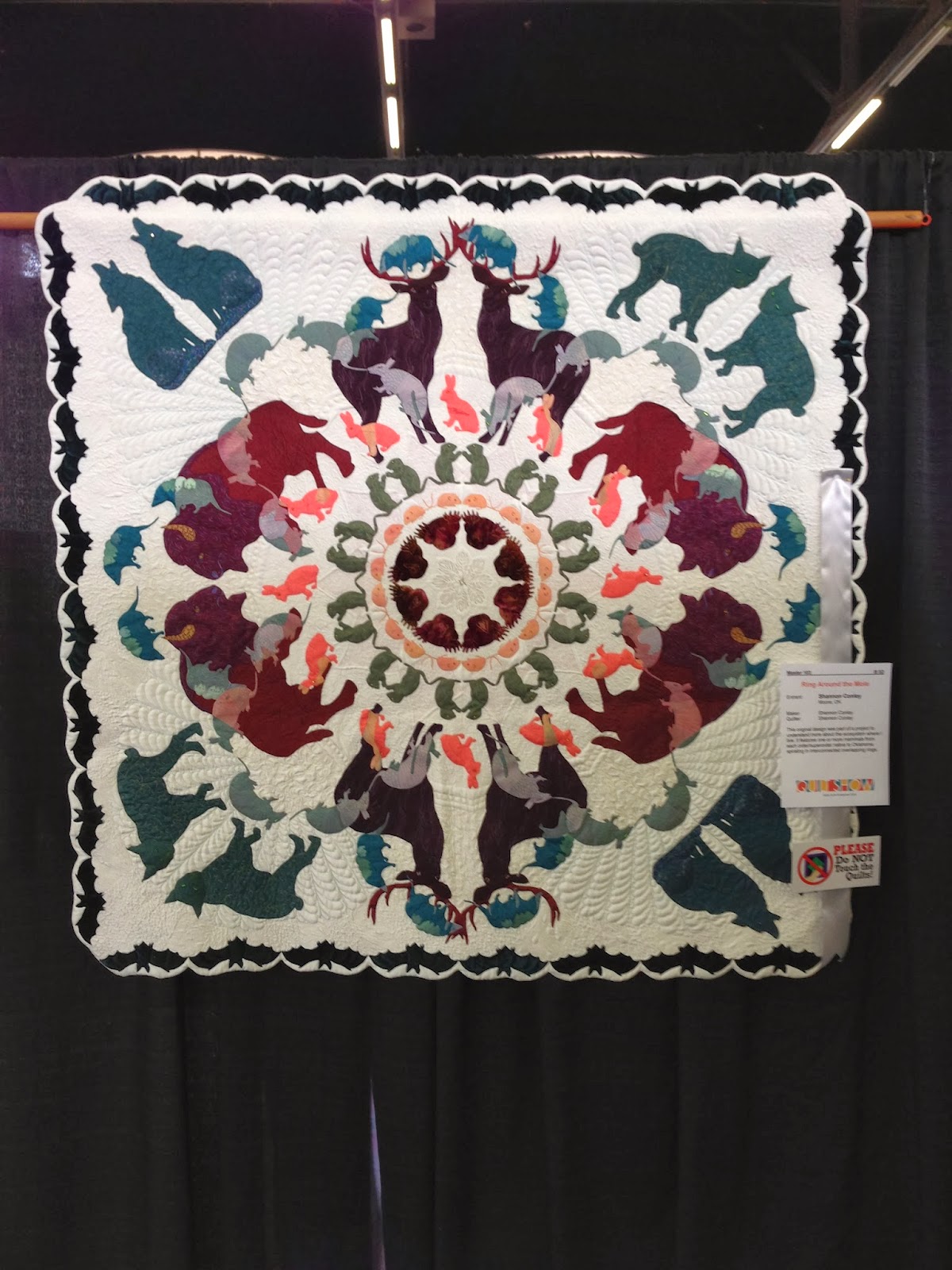 Here you can see the bat, possum, bison, armadillo, rabbit, prairie dog?, mouse and mole. The mole was appliquéd in velvet. 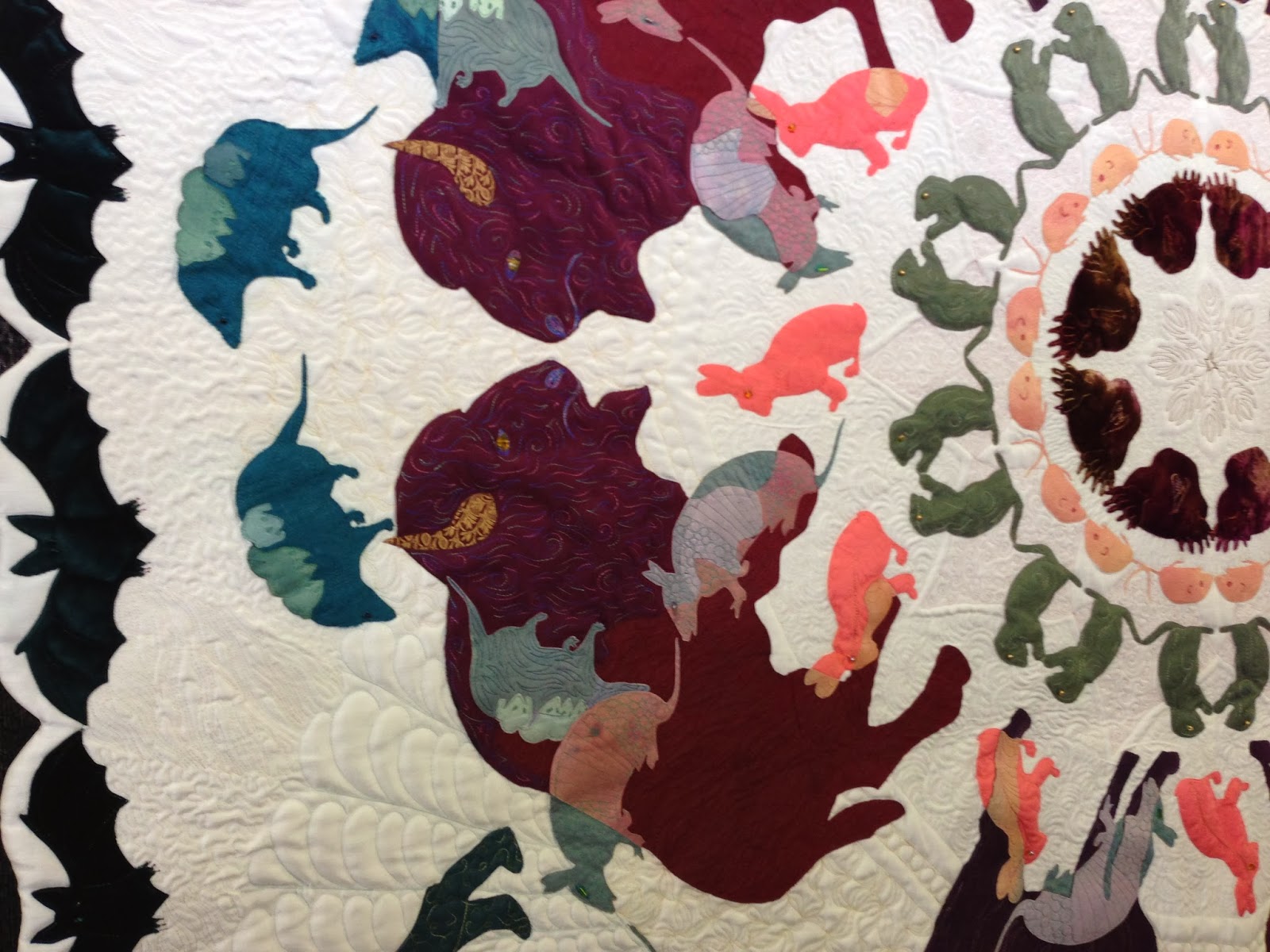 Here's another from the modern category that I really liked. It's by Shannon Page. 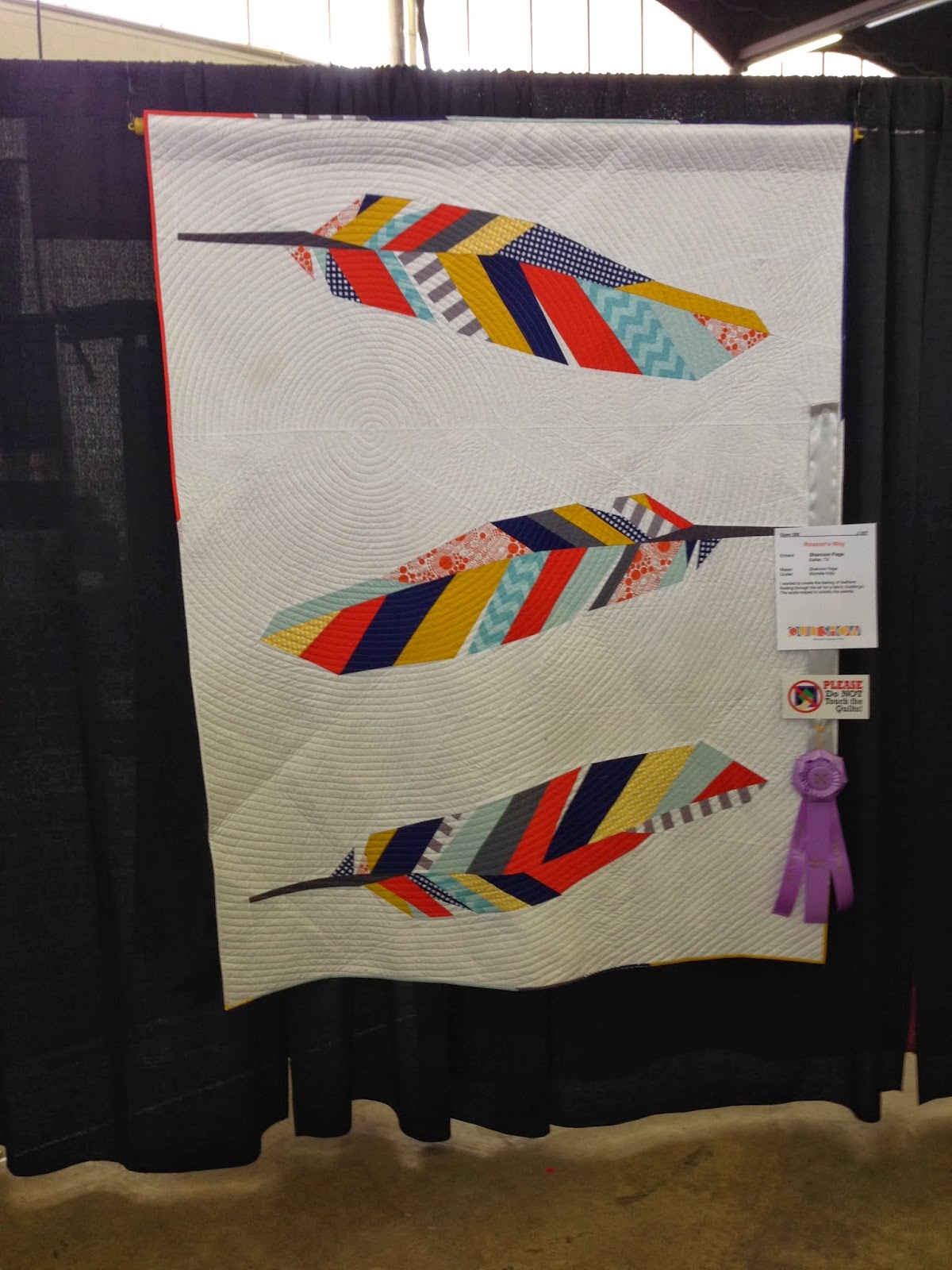 Another great modern by Rachel Bryan. 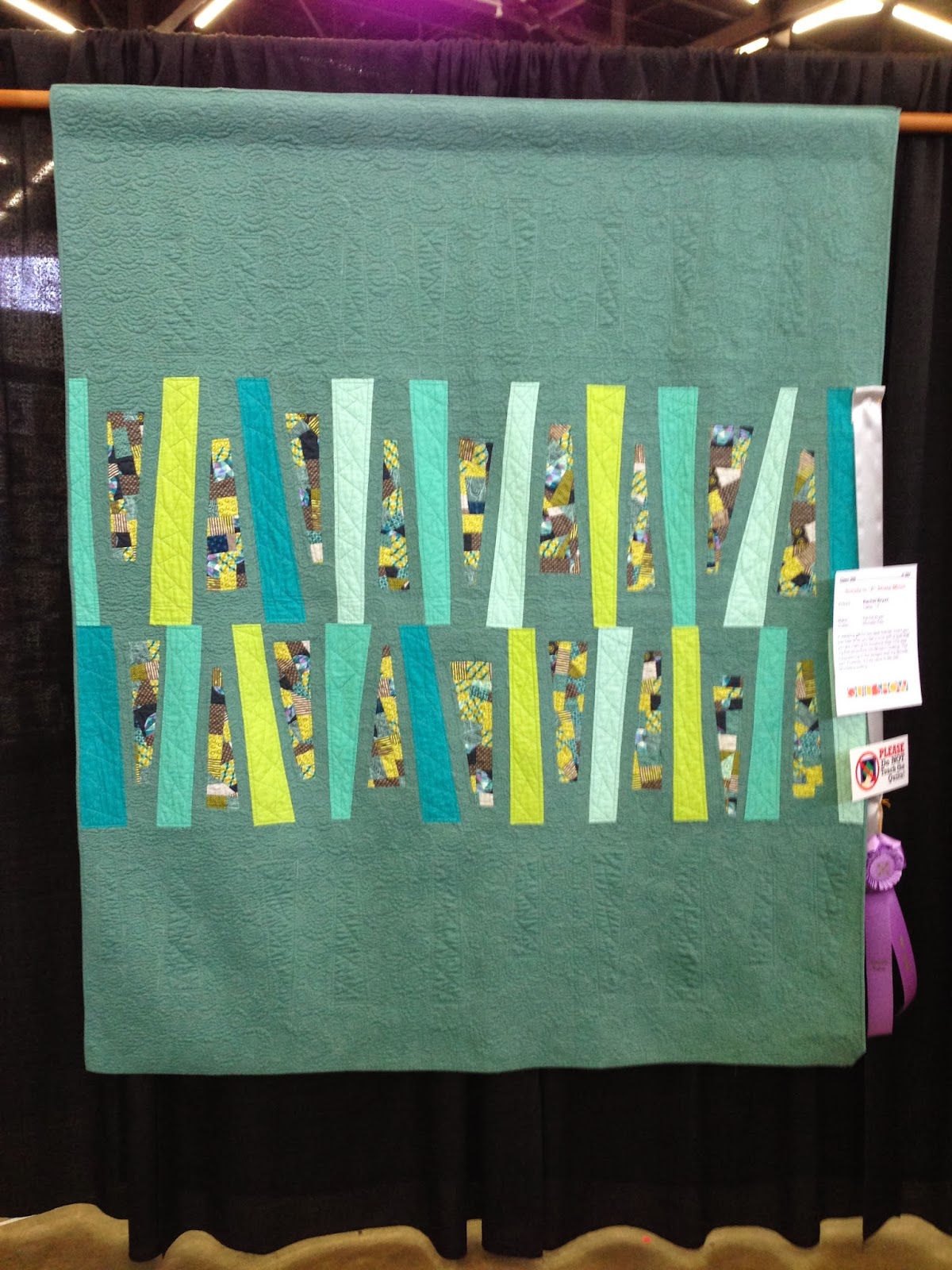 Here is the first place winner in the modern category. It's called Hex Checks by Wilma Moss. The quilting is exquisite. In fact, it feels like a sampler of beautiful free motion motifs -- plus the fun hex shapes and fabrics. 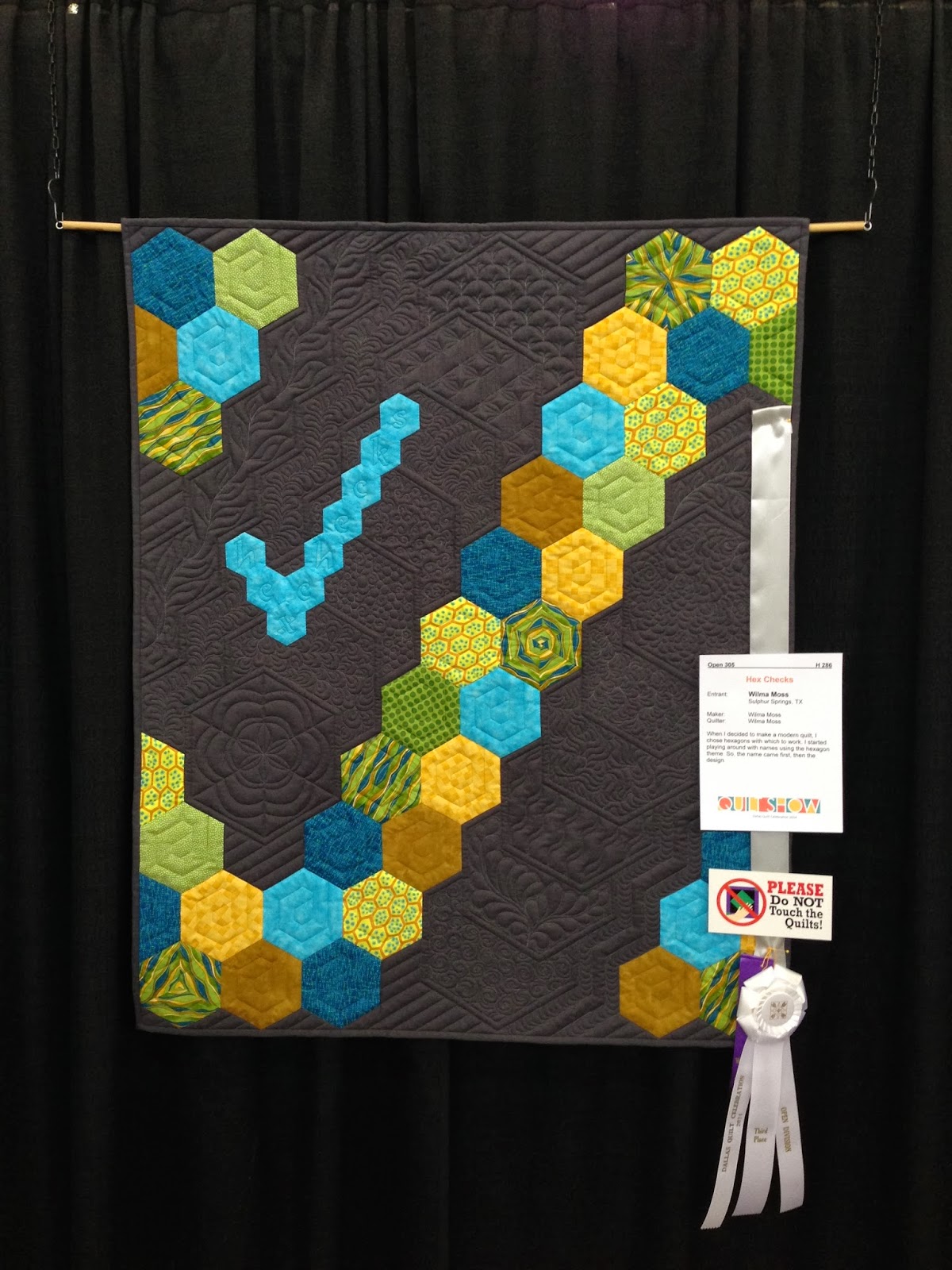 As I looked at the winners in the modern category, it seemed to me that the judges were recognizing quilts with particularly notable quilting. When I think of Modern Quilts, I don't think of the quilting as one of the most important features. If I had been a judge, I might have leaned more toward recognizing quilts with great "modern" design, rather than stand-out quilting.

I think this was my favorite quilt in the whole show. Can you believe it? There were several Baltimore album style quilts and this one had the most character, I thought. 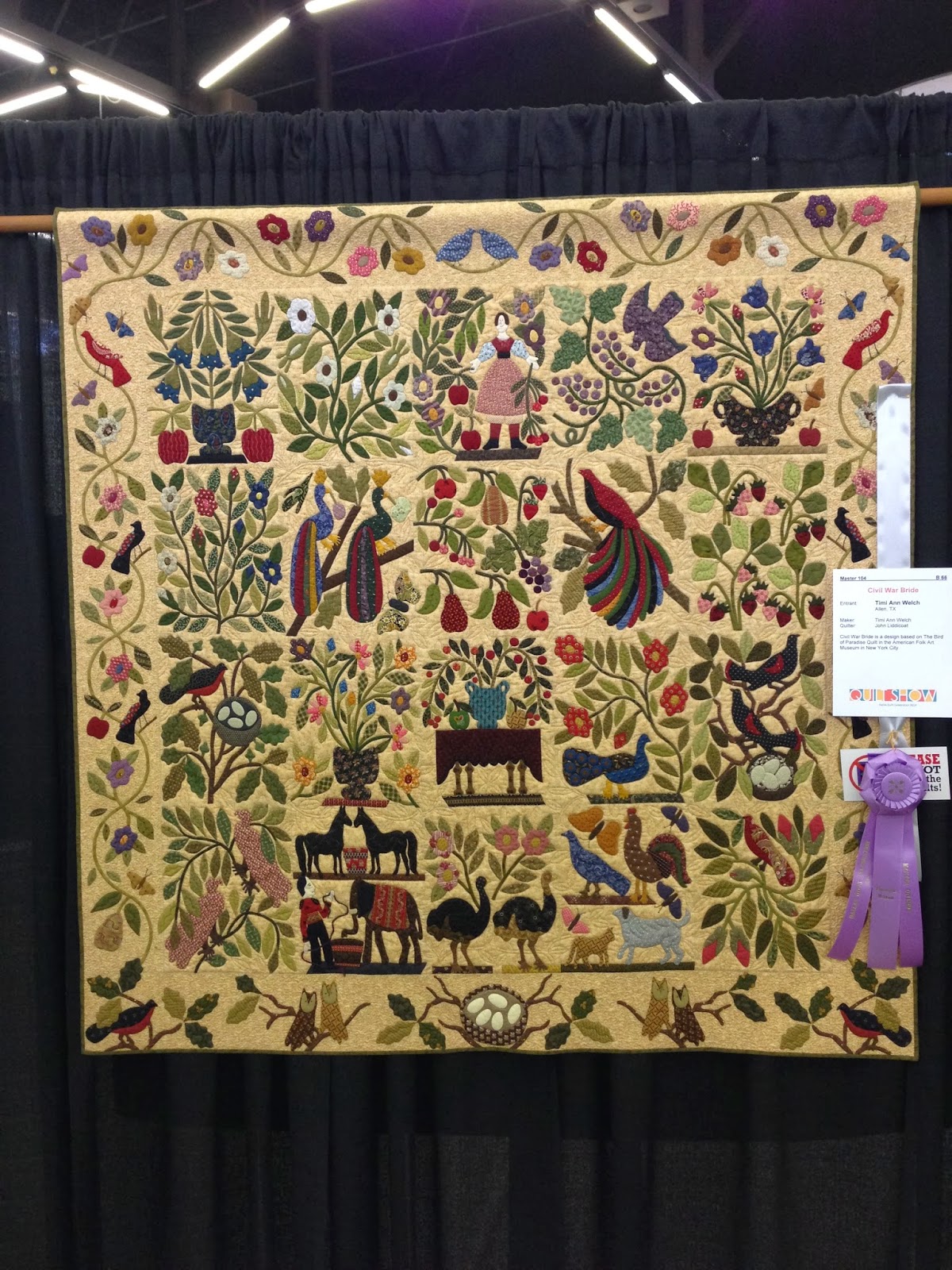 It's called Civil War Bride by Timi Ann Welch and it's based on The Bird of Paradise Quilt in the American Folk Museum in New York City. I think that's the groom there, wrangling his elephant. (???) 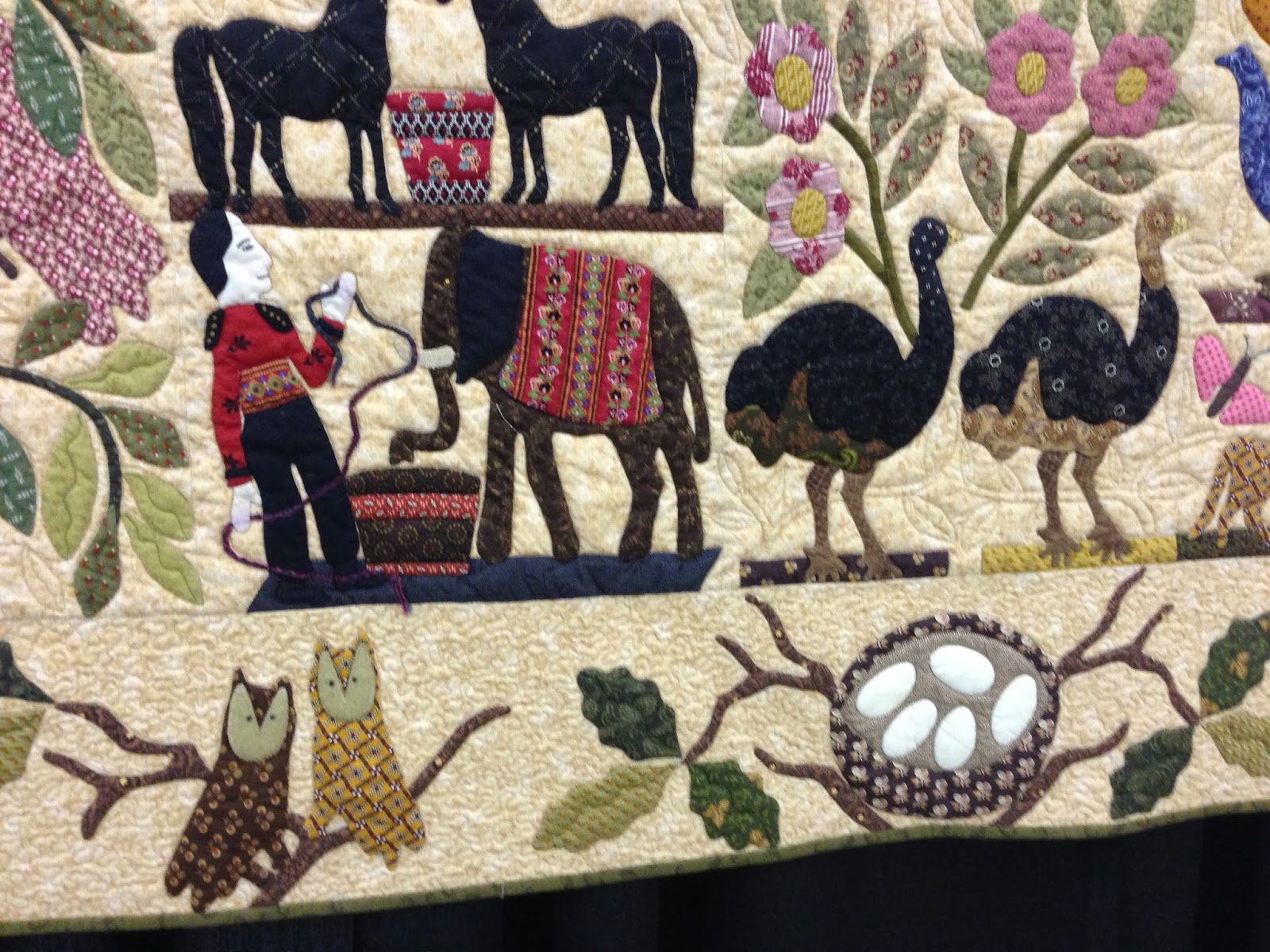 I love the owls in the border above and the robin with her nest here. 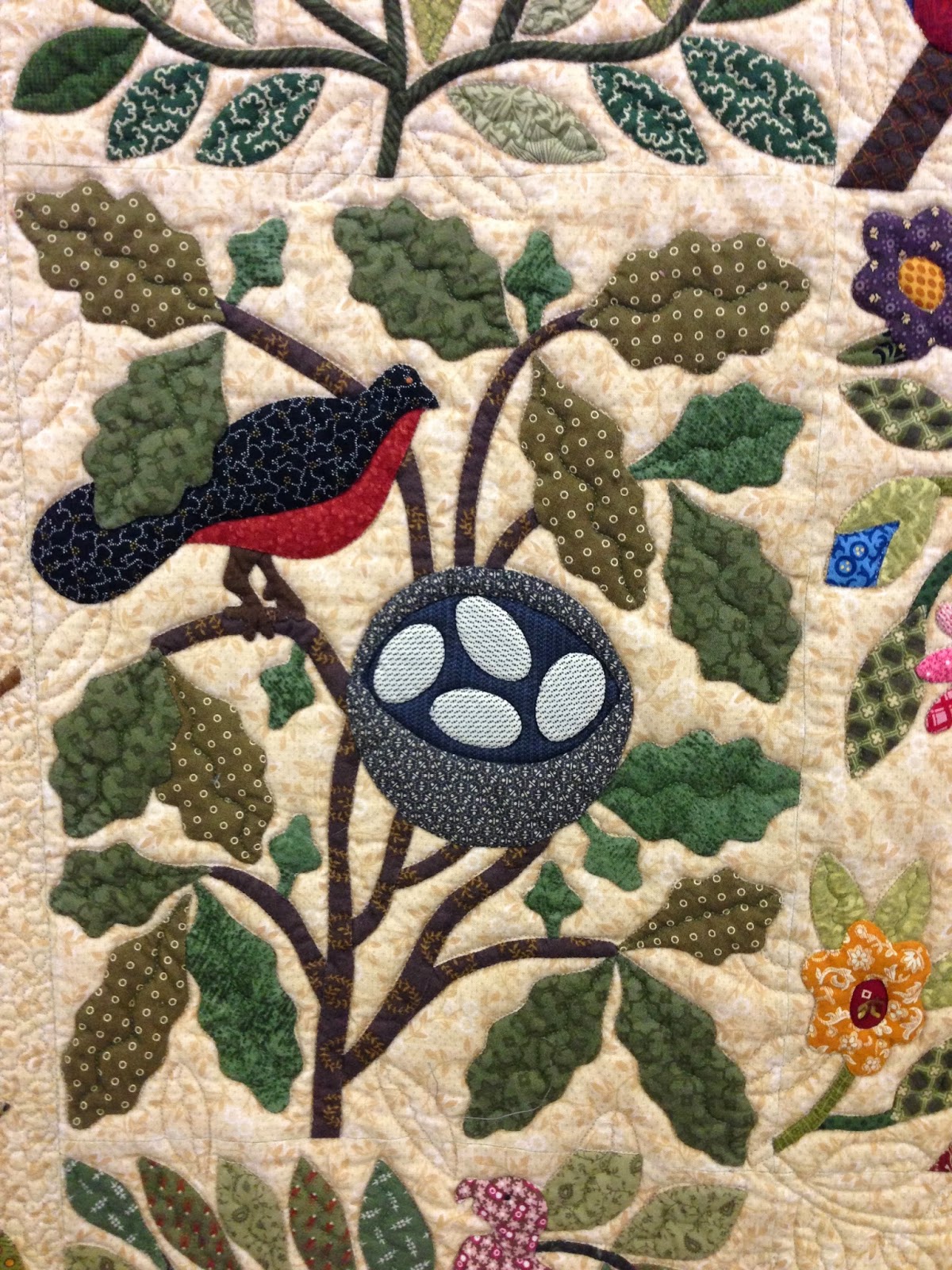 And here is the smiling bride! 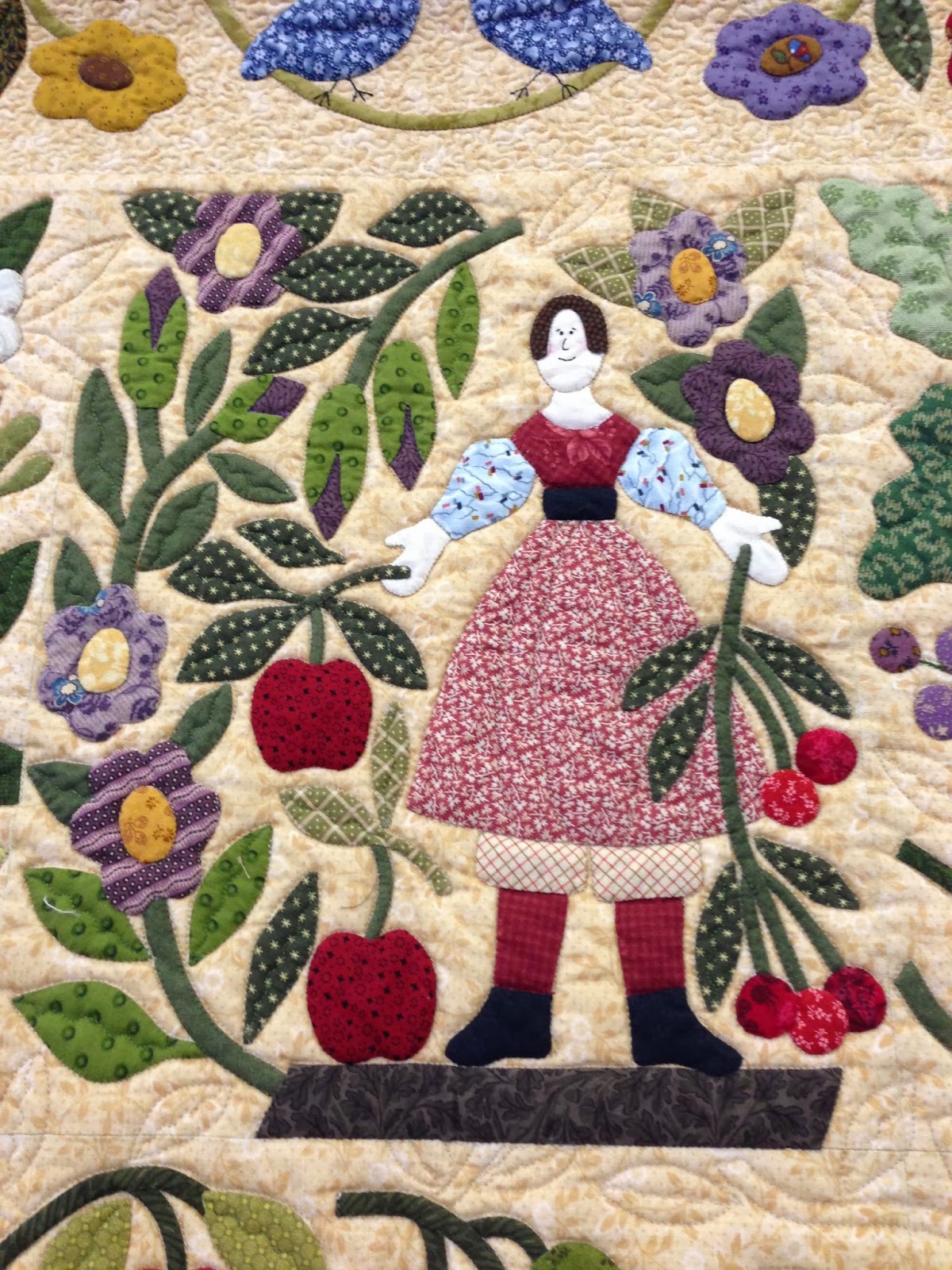 A few more thoughts on judging. Inevitably, when I go to a show, I think about how I would have judged it, to which quilts I would have given blue ribbons. I'm not a judge and I don't think it's productive to criticize or question the judging. That's for the show administrators to manage. But, I did enjoy perusing the "Pictorial" category and thinking about which quilts I liked and why.

Here is Chihuly's Gondola by Melissa Sobotka. This quilt won the $10,000 Best of Show Prize at the International Quilt Festival in Houston last fall. 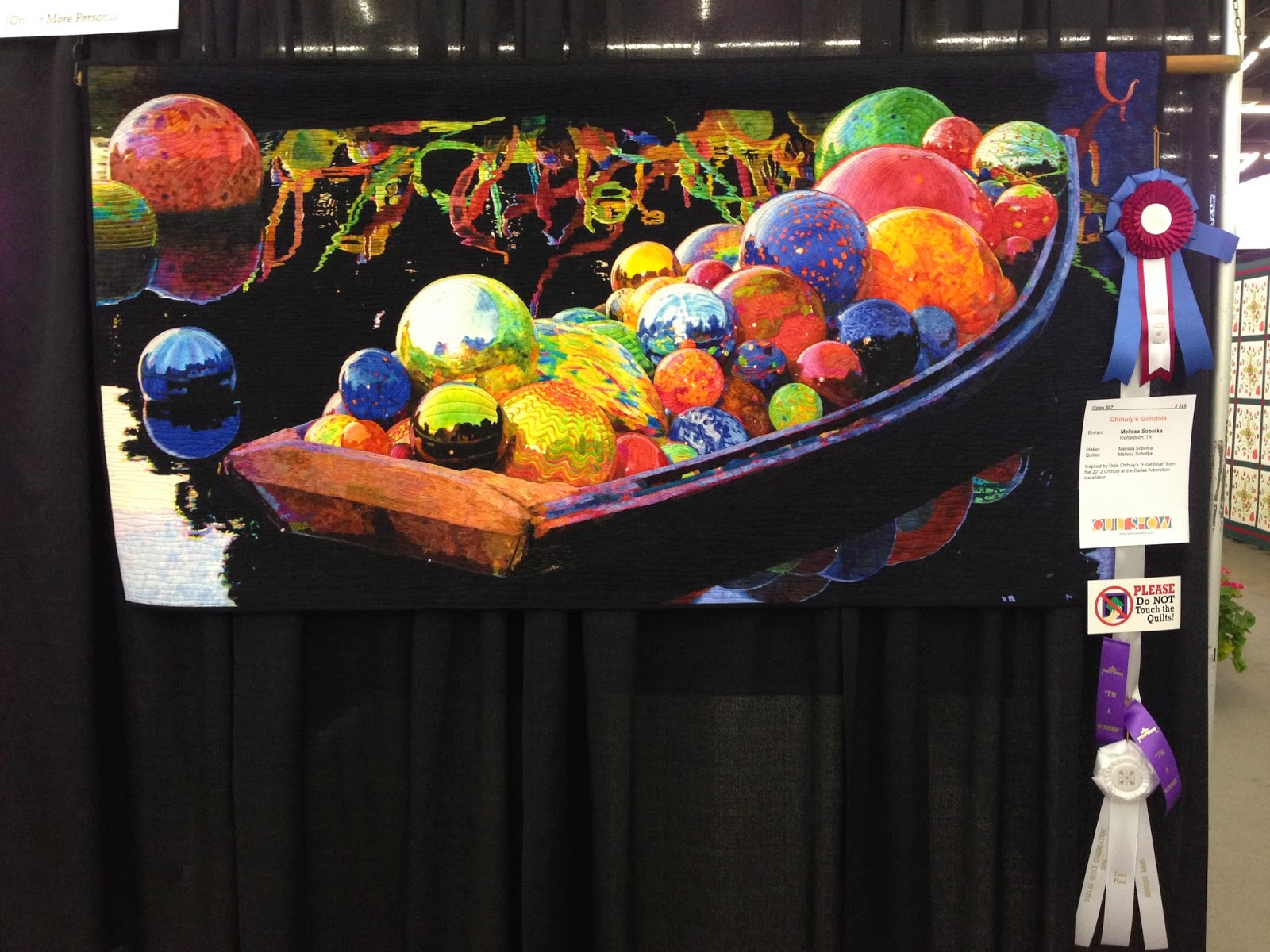 At the Dallas Show, it won third place in Pictorial. (It also won Pride of Dallas which is a separate award chosen by a local notable figure. This year it was chosen by Donald Slater a local gallery owner.)

Here is the first place winner in Pictorial: I Dream of Wild Horses by Kristin Vierra. 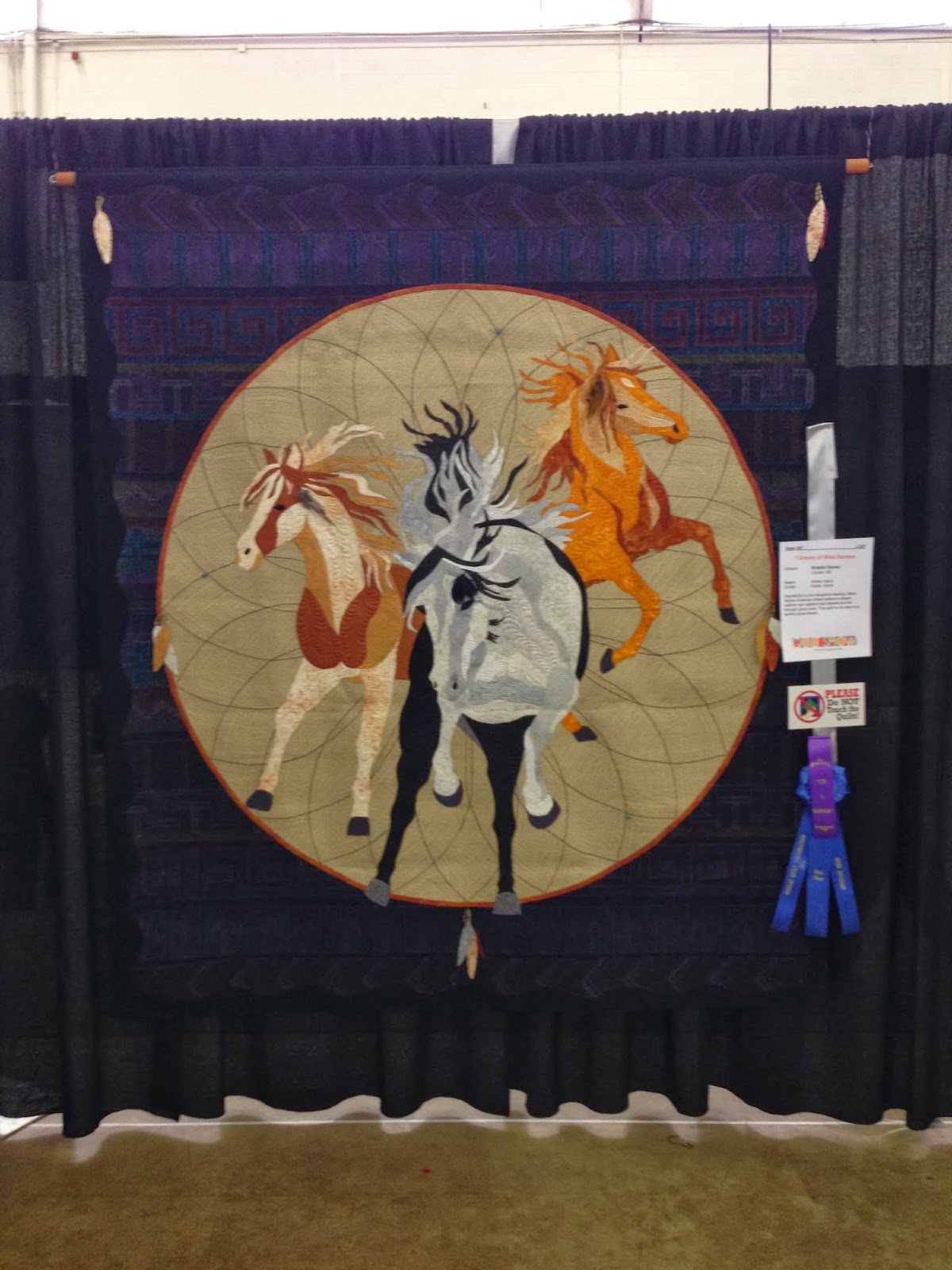 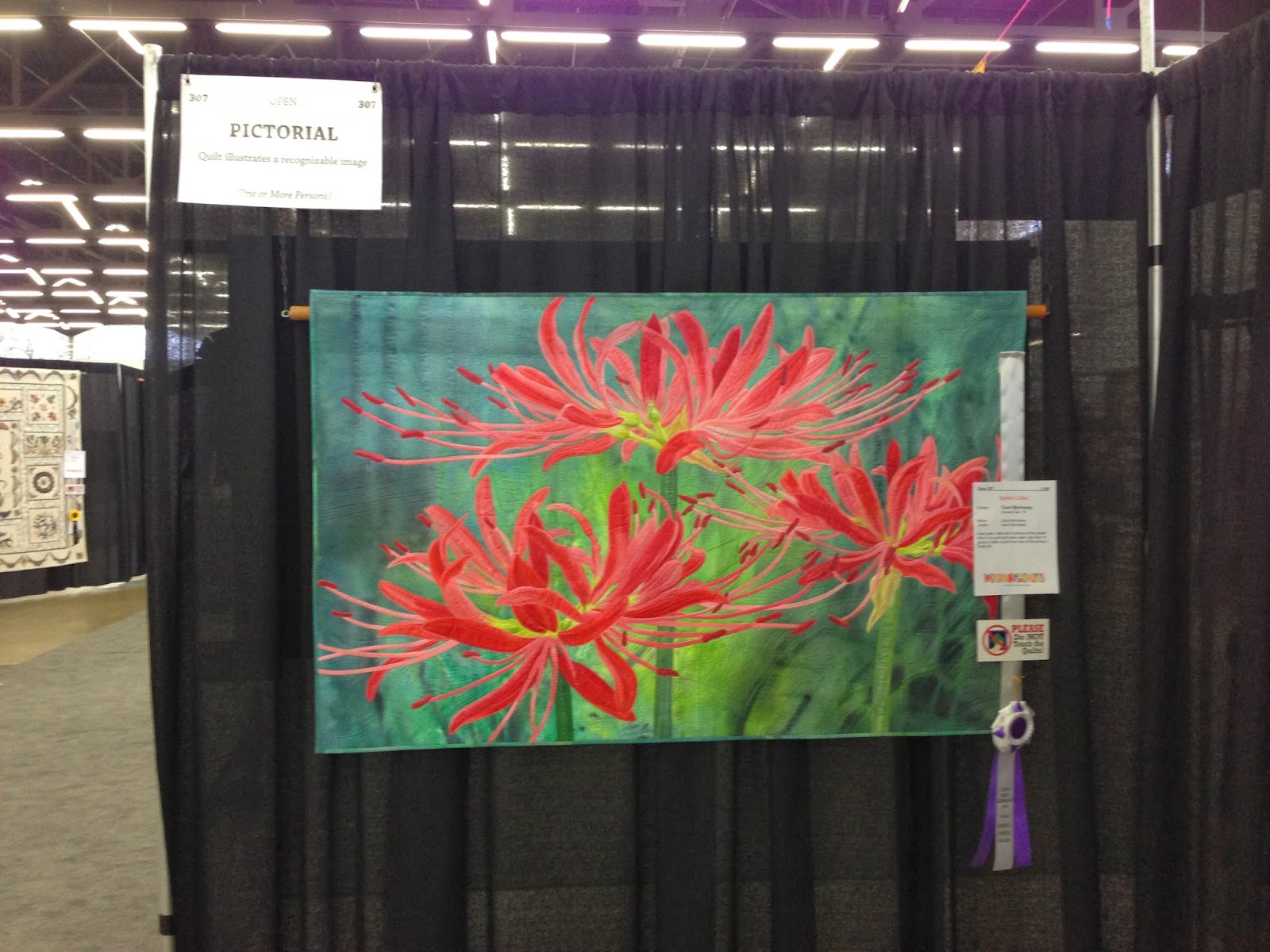 The second place winner was Chloe by Theresa Fetch. Sorry I cut off the side of the quilt. 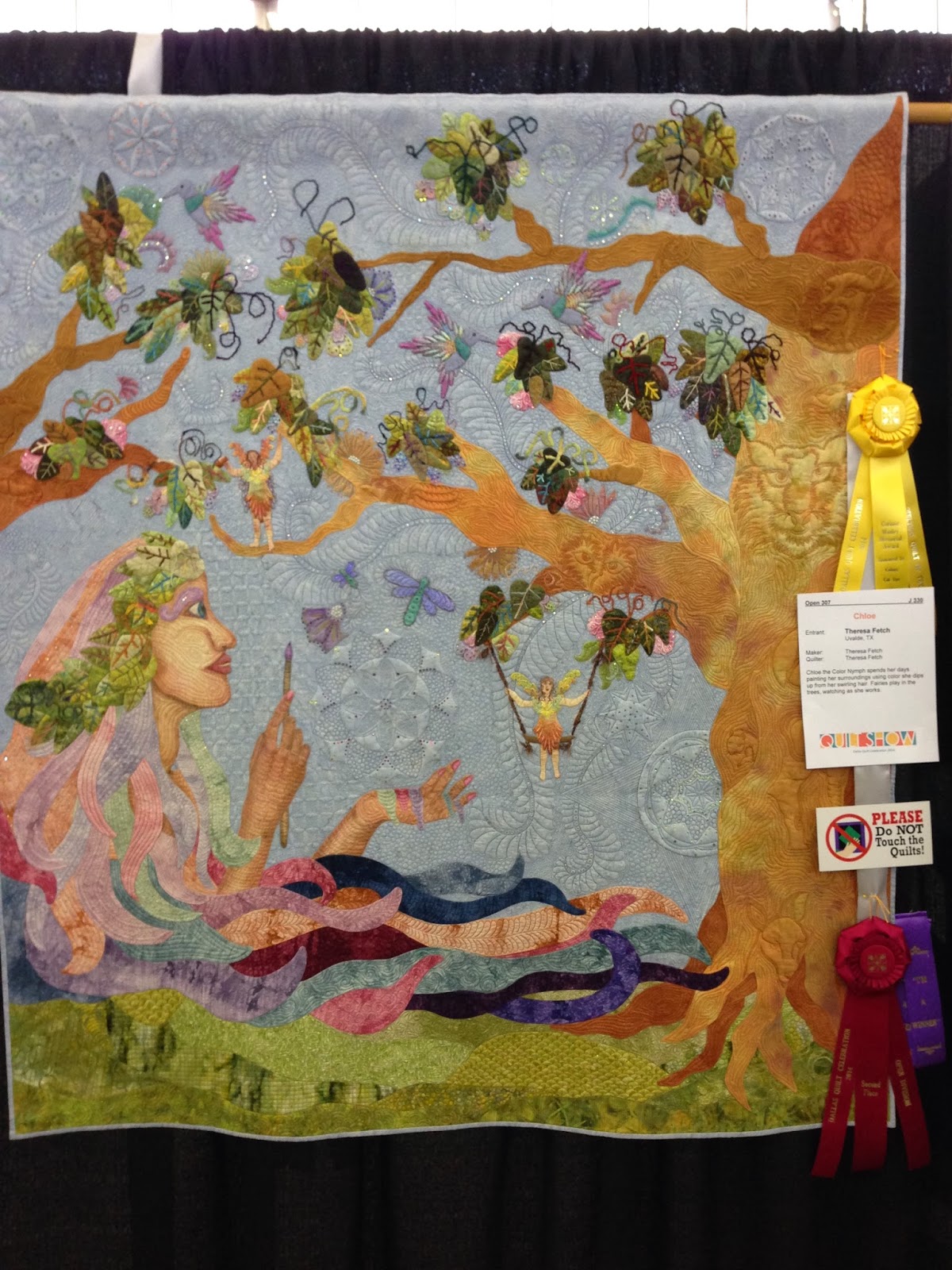 To me, the spider lilies and the Chihuly quilt were the stand outs in this category, when I think about art created from fabric. You can see a full list of all the winners here.

One thing I love about the Dallas show is that there are tons of categories. There are also some categories for artisans -- people who don't teach/sell patterns/etc and other categories for masters -- people who generate some income from their quilts or have won at least two first place ribbons in the show in the past. Fabulous! More quilts and good, equitable competition. Some categories are open to everyone.

I leave you with a couple of shots from the Master Art Category. 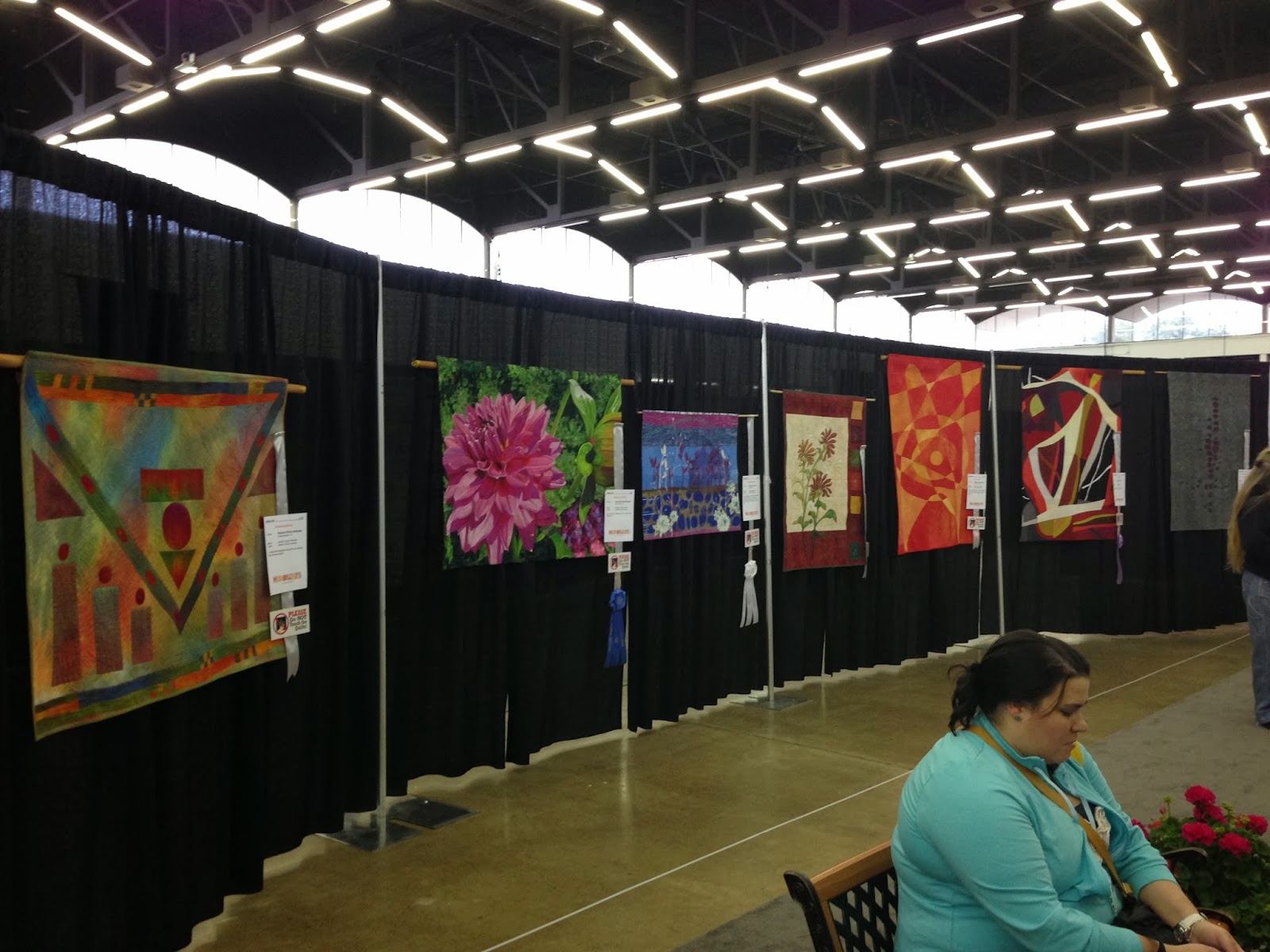 On the far left is a piece by Barbara Oliver Hartman in her classic color palette. The first place winner is the pink dahlia by Andrea Brokenshire, then you'll see my Grow Abundant which won third place. The orange/red piece is another by Barbara Oliver Hartman and the abstract next to it is by Heather Pregger. All outstanding work and I am thrilled to be hanging alongside them.

Further down the row in the same category, you find my Blue Chair Mantra and Heather's String Theory. 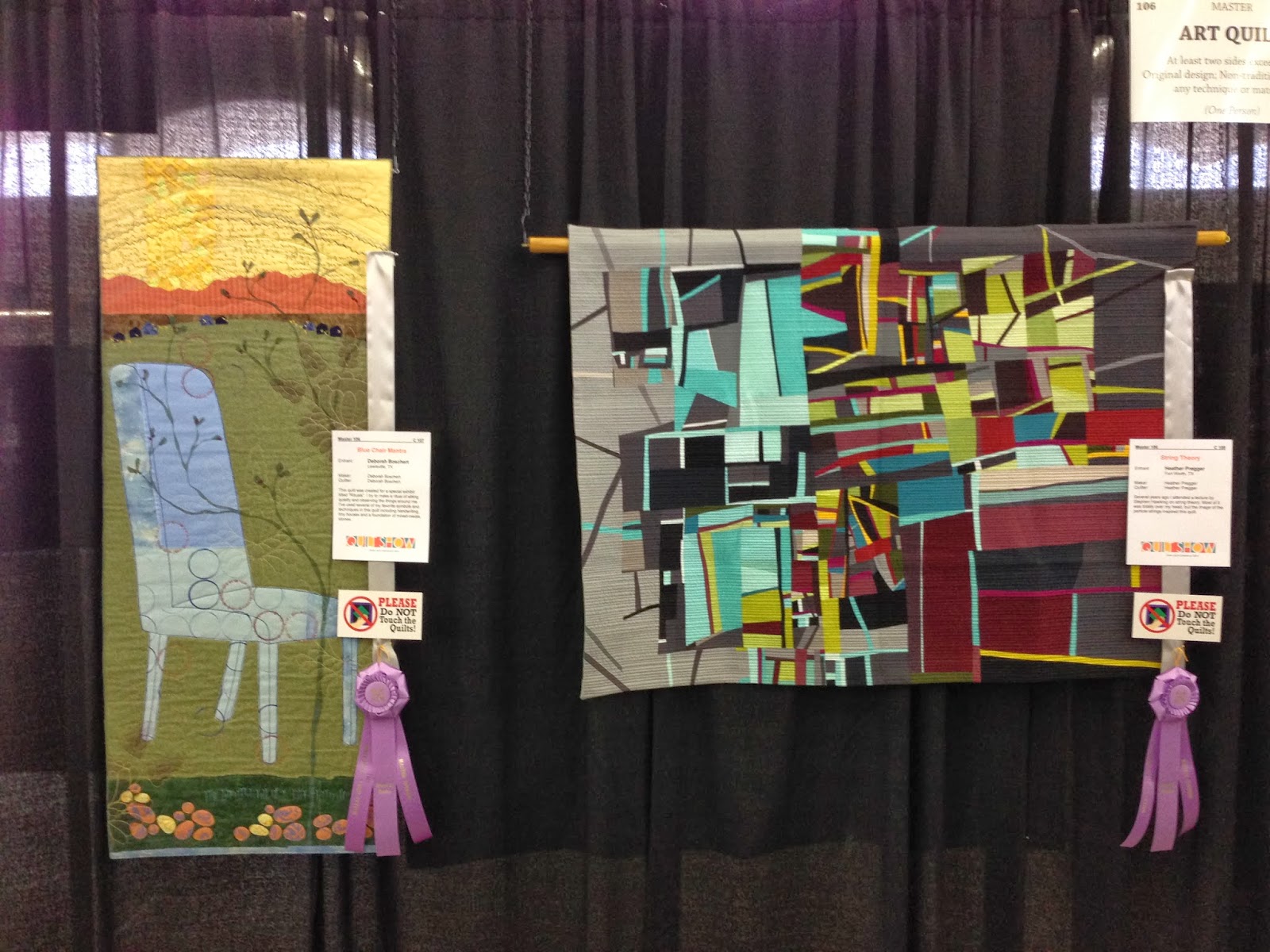 Frankly, (again if I were the judge) I am surprised that the judges liked my Grow Abundant blue/purple/layered/house/flowers quilt more than Blue Chair mantra.

Like I said, yesterday... mostly I'm just thankful for such talented, inspiring friends and I'm eager to get back in the studio!
Posted by Deborah Boschert at 11:18 AM

Shannon's Ring Around the Mole will be part of our upcoming NM SAQA show, Beyond Tradition. We're so excited to have it in addition to more than 100 other amazing works, come visit-
Hubbard Museum, Ruidoso NM, April 5- September 1.

Stunning work here. I love the Chihuly quilt and have seen this in a publication before. I have seen your Blue Chair Mantra also and think its super, hadn't seen your Grow Abundant and was surprised to read that it had been rejected before.

I think judges look so closely at the quilting on modern quilts because modern quilts generally have so much "negative space" that has to be filled. The quilting,exposed this way, plays a starring role in modern quilts that it doesn't always play in more traditional ones. That's my guess, anyway.

Agree with you on the pictorial quilts, love the "Masters" category. But to me, Modern quilts are ALL about the quilting, whether it is simple or fancy, like the Hex quilt, which I adore! I like the modern vibe, the clean lines and feel, but they appeal to me so much because of the space for quilting and what the makers do with that space! Interesting!

Thanks for sharing these. I was at the show but missed the quilt about Deanna....Such a small world. I knew Deanna from pottery classes we took at Richland College. Then her tragic death was just a few blocks from my parents home. Wish I had seen the quilt. Loved your Blue Chair quilt! I hope to make another chair quilt soon.