My parents are leaving today for a trip to the "stans." They will be visiting Uzbekistan, Kyrgyzstan, Turkmenistan, Kazakhstan and Tajikistan. My dad noted that they will not be visiting "Af or Pak." I am so proud of them and their spirit of adventure!

My mom was really hoping to see some pictures from Claire's marching band performance this past weekend. So, I'm uploading this video and some pictures with the hope that they'll get a chance to view it before they spend the next two days on airplanes.

(Other regular blog readers might not be interested in watching... which is totally fine. But, I will say it's pretty fantastic!)

Claire is in 9th grade and attends a 5A high school in Texas. That's the largest designation for high schools in Texas. Her school has about 3000 students and about 900 in 9th grade. There are just under 300 students in the marching band. It's the largest "club" in the school. Last year, her school won second place in the state band competition for 5A marching bands -- about 245 schools compete in that classification. 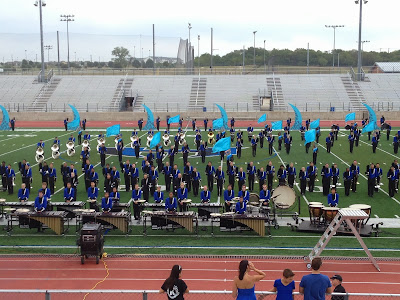 Claire plays the oboe, but oboes do not march, so she had to pick up a new instrument. The band director suggested she try the tenor sax and the school provided her with one. We picked it up the day after we arrived in Texas and two days later she began the summer intensive marching band rehearsals.

Not all 300 band members are able to march on the field during the competition. She did not earn a marching spot this year. This is nothing to be disappointed or defeated about. In fact, the band depends on these "secondary" musicians to move those giant waves and pink rings during the performance. Claire is in charge of the pink ring in the middle of the field by the end zone. During the performance she stands at attention on the edge of the field. (You'll get a glimpse of her in the video.) 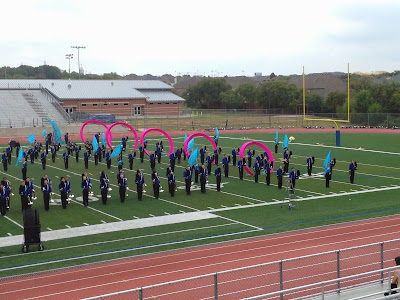 After the performance on Saturday morning, the band posed on the field for a big picture. The band director was on the stadium roof above the press box using a microphone to direct the students to specific positions to make a great picture. As he shifted the kids about, he called them by name! From on top of the stadium! 300 kids! 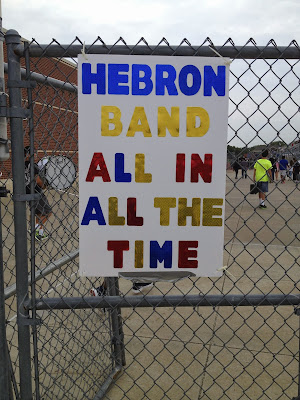 The amount of time, energy, dedication and work that Claire (and all the kids) have put into this performance is astounding. She's enjoying it so much and we are just thrilled that she has an opportunity to be part of such an impressive organization.
Posted by Deborah Boschert at 11:37 AM

Loved it! Of course I'm getting weepy. Love you!