I think I may have fallen off my "one soup per week" schedule, but that's fine. It's more about actually making all ten soups than about the ten week schedule. So, we're pressing on! Here is my Curried Squash Soup served with grilled asparagus and crusty sourdough. 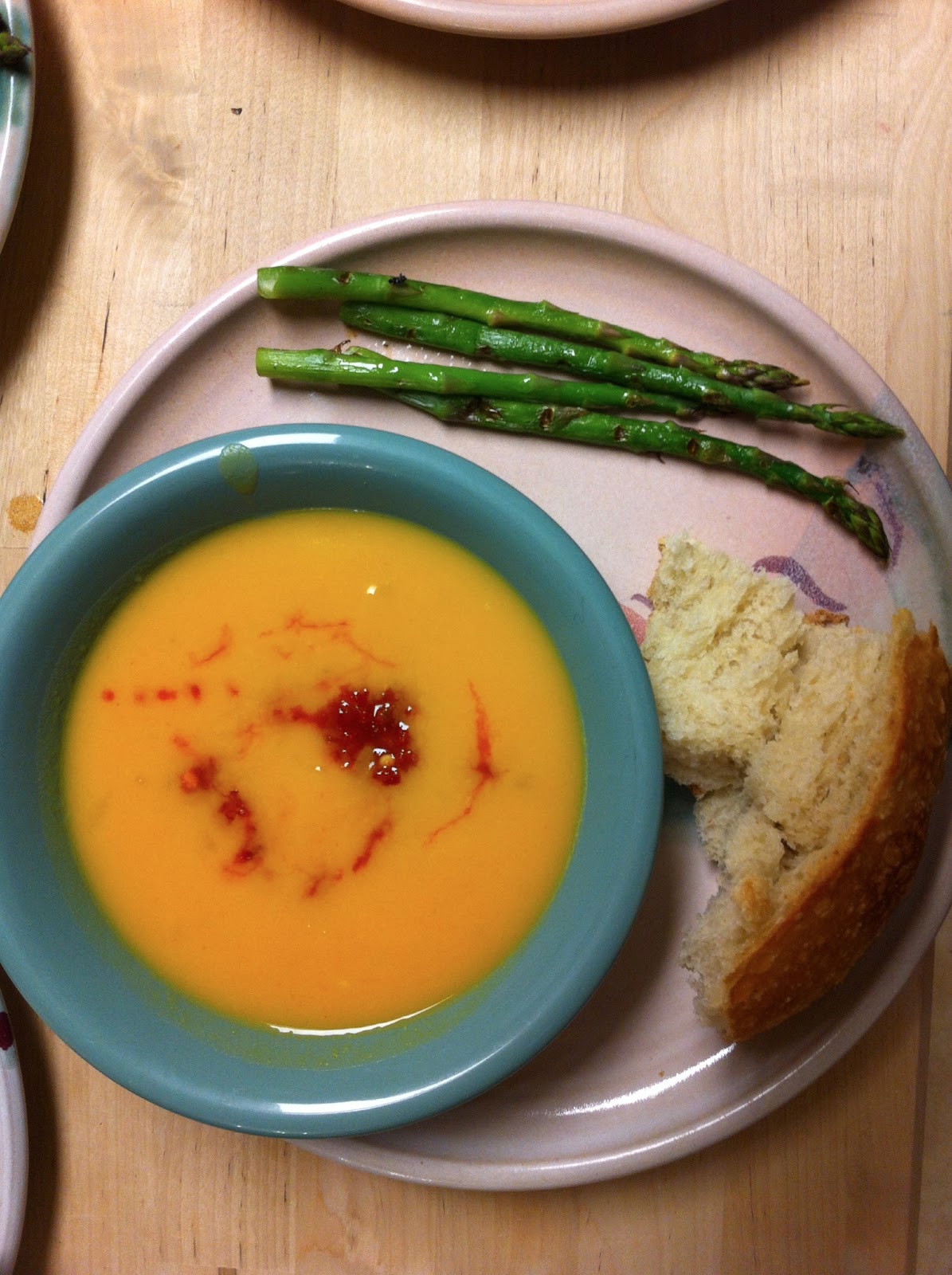 I was really looking forward to this soup. I've never made anything like it. In fact, I don't ever make squash. I don't even like pumpkin pie. The only "squash" I ever cook is zucchini. But, I thought this might broaden my squash horizons. I love curry in all kinds of formats too, so this seemed promising.

I was disappointed. The fact is, I just don't like squash. Secondly, the recipe says to drizzle Asian chili garlic sauce on top. I searched it out in the ethnic food aisle since I'm trying to stick to the recipes. Yikes! That stuff was wicked hot. I was following the magazine picture, so I put quite a bit on -- even more than you might see in my picture since most of it sank and you couldn't see it (which is part of the point of a garnish, right?). Way way way too hot for me. Jeff liked it fine, but he eats super hot stuff regularly. 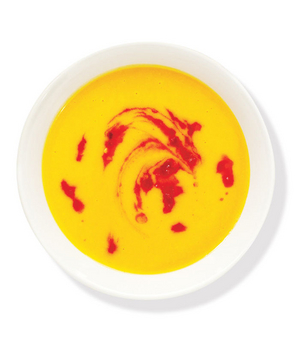 Also, one of the main liquids in the squash soup recipe is coconut milk. I thought the coconut flavor was too strong and didn't really match with the squash and the curry. Anyway... won't be making this one again. If I wanted something similar, I'd probably search for a carrot ginger soup recipe.

Here is my Spicy Chicken and Hominy Soup served with corn bread. Yum! 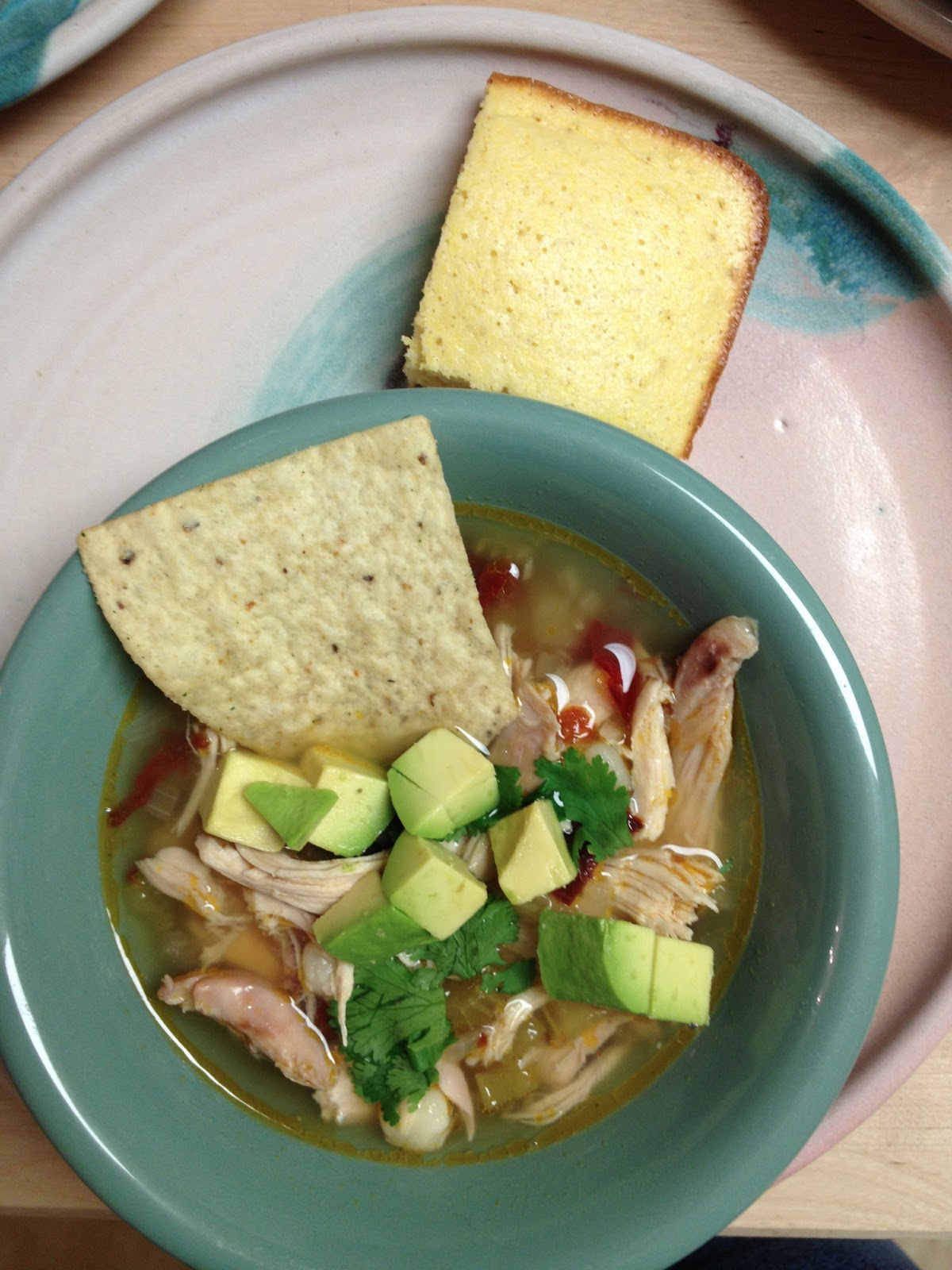 I make a soup quite similar to this very regularly. The key is the delicious rotisserie chicken (which is on sale at my grocery store on Fridays for only $5.) My recipe includes a can of chopped tomatoes and a bunch of toppings that each person can dish up individually (cheese, tortilla strips, lime wedges, fresh cilantro and avocado). The Real Simple recipe does not have any tomatoes, but does include chiles in adobo sauce which added a lovely, smokey, spicy flavor. Also the magazine recipe includes a can of hominy, which I have never cooked with before. Yum! Great flavor and texture. The recipe in the magazine called for a dollup of fresh salsa and tortilla chips on top. I put cilantro and avocado on top since I had those on hand. 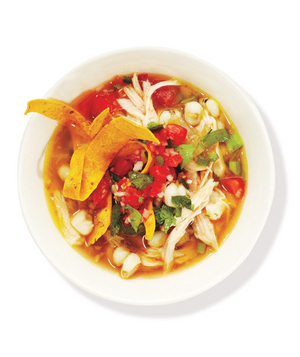 In the future, I'll probably combine the best elements of the magazine recipe with my personal recipe.

Both of these soups look great to me. I make a similar curried squash soup and it is a favorite, especially if I am entertaining a group that includes vegetarians. But I love squash! The second is very much like the pozole I make, but it uses pork instead of chicken. Warm and flavorful! I am enjoying your soup experiments.