All music, all the time this week!

Benjamin had his holiday strings concert on Tuesday morning. Third, fourth and fifth graders can take violin classes at his school. (Or viola, bass or cello, actually.) Isn't that amazing?! 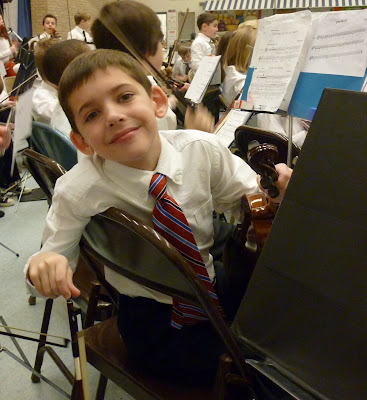 It was delightful. I especially enjoyed Jolly Old St. Nick!

Claire performed in a choral concert. My parents live in western NY, just a 9 hour drive, so they came early this week to join us for all these special events. Here is Claire with my dad. 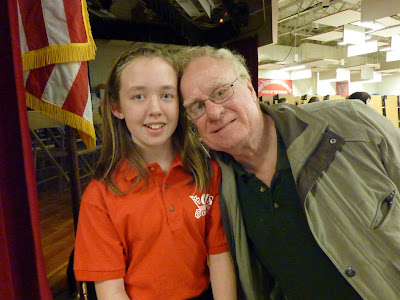 Claire also played in the middle school band concert. She is one of two oboe players. Her band concert was most impressive! 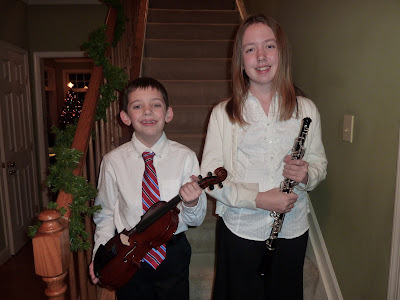 By the way, that white shirt Benjamin is wearing? I sent him to school in the morning wearing the specified attire for the morning concert, along with a change of clothes for after the concert (also suggested by the strings teacher). When I picked him up from school, I asked him if he had his concert clothes. He did not. I sent him back in to get the bag out of his locker. When we got home, I found his pants, tie and shoes rumpled up in the plastic bag. No shirt. We got back in the car and went back to school to check his locker. And the bathroom where he changed clothes. And the classroom. And the Lost and Found. No shirt.

Hmmm. "I guess you'll wear your button down plaid shirt for the evening concert. It's a good thing you'll be sitting in the back. Oh, and you'll be buying yourself a new shirt before the end of the week, since that's the shirt you were supposed to wear to church on Christmas Eve." Much more grumbling and frustration from both Benjamin and me.

Luckily, the shirt showed up when he returned to school for the evening event. Someone must have found it on the floor in the bathroom and delivered it to the strings teacher.

I never should have sent the change of clothes in the first place. It would have been better for him to wear the dress-up stuff throughout the day rather than risk losing any or all of the pieces along the way. I need to remember that next year.
Posted by Deborah Boschert at 8:33 AM

This sounds so much like my life 35 years or so ago!! The shirt story would have been Mark, for sure. He was an accomplished cello player and was in the California Youth Symphony. My girls dropped out of all music stuff after grade school.

Ah, but if you did NOT send a change of clothes, his lunch would have ended up all over that nice white shirt. Parents can't win.