Jeff took me out to dinner last night. We went to Rise No. 1. It's received lots of press lately and I've been wanting to try it. It's a quaint little French place specializing souffles. It was so fun. Really unique and very interesting. I tried to take some pictures that really reflected the ambiance of the place, but I didn't have much success. (What do you do in a place that is dark, but if you use a flash it drowns everything out -- not to mention, annoys the other patrons.)

You can see some wonderful photos in this set I found on flickr. There is a wonderful sculptural wall of tree branches that makes the place seem divinely rustic. 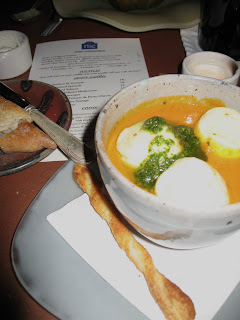 This is the "marshmallow soup," which really isn't marshmallow at all. It's a tomato carrot bisque with mini goat cheese souffles on top. The soup arrives in a beautiful ceramic bowl with a lid in which there is a raised well filled with pesto sauce. The server removes the lid and tips the sauce over the soup at table side. Sigh.

This soup is the talk of local foodies. It really is spectacular and those little goat cheese souffles are perfection. Apparently the recipe and the container in which they are baked are top secret. I can see why.

Then we moved on to savory souffles for our entrees. I ordered Jambon and Guyere (ahem, ham and cheese) and Jeff had Herb and Spicy sausage. They arrived so beautifully poofy, brown and warm. 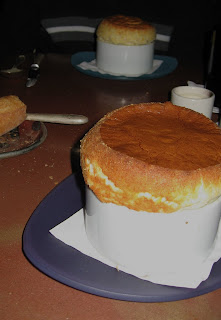 I don't think I've ever really had a souffle. I understand the concept from many hours of Food Network viewing. And I understand they are very delicate ... in fact, at one point in the evening, the manager came over to tell a woman at the table next to ours that her souffle had fallen and they were remaking it. She was not happy. (She was not happy about lots of things. I don't like sitting practically shoulder to shoulder with the people at the next table, so close that you can't help but hear every word. Another story.) It wouldn't have bothered me at all.

We finished with dessert souffles. How could we not? I ordered chocolate. (You guessed that.) Jeff ordered Bread Pudding. Not just bread pudding, but bread pudding souffle. Interesting, don't you think? When they arrived, the server made a big hole with the spoon in the top of the souffles and poured chocolate sauce in mine and brandied cream in Jeff's. So light... and yet rich. Very good.

Even the bathrooms were full of character and style.

I feel so lucky to live in a big city with interesting restaurants to explore. We love these unique experiences. I'm going back for the soup!
Posted by Deborah Boschert at 4:28 PM

Email ThisBlogThis!Share to TwitterShare to FacebookShare to Pinterest
Labels: food

Ummmmm. That all looks so good and your descriptions made my mouth water. I love souffles. I make a mean spinach souffle. It is beautiful right out of the oven, but you serve it fast before it starts to fall.

My mouth is watering too. This is a must do for my next visit, which will not be soon enough. Yummy!
Love, mom

Sounds and looks fabulous. To answer your flash question - if you can on your camera, keep the flash off but extend the exposure time. You will get better colour too.( I learned that today experimenting with my new camera and I feel clever - thanks for the chance to show off!)

Rebecca said...
This comment has been removed by the author.
6:32 PM

I know it's totally NOT a souffle, but the same time you had that, I made up the Epiphany Brunch Casserole we used to have as kids at church. It was surprisingly pouffy and light. Like what I'd imagine a souffle to be. Maybe I'll get around to trying one someday.