I adore Nikki Giovanni. I studied her a bit when I was in high school. It's amazing how a poet can capture the feelings of a nation, give us permission to embrace our feelings and encourage hope. 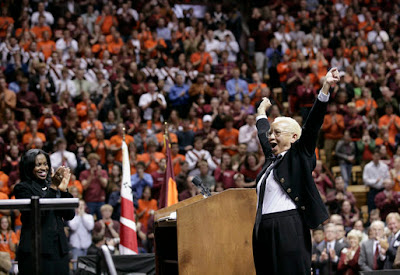 Benjamin has a new imaginary friend, The Little Cutter Guy. Apparently Benjamin found him in a tire during recess and brought him home. He can cut things. Even cars! He is joining Benjamin's two imaginary ponies, Sparkle and Sprinkle.

Claire is starting paino lessons on Friday. Right now she is working on Hot Crossed Buns.

It's pledge time again on my NPR station. Grumble.

I've been making smoothies as after-school snacks several times a week. So yummy! I also bought some Vanilla Bean Chiller from a friend who recently started selling Tastefully Simple products. Yowza! Delicious! (Even though it adds way more fat and calories.) A squirt of whipped cream and a straw make it extra special. (And sometimes an extra squirt right into some wide-open mouths!) Sometimes we even enjoy them at the picnic table in the backyard.

I don't suppose this post is a good example of a "thinking" blog. I'll try to remedy that soon.

Nikki Giovanni has been the bright light in all of this mess. I am a Virginia Tech graduate and have been watching too much of this coverage. I wish I had met her when I was a student.