Claire and Benjamin and I had a fun time carving pumpkins back in October. Well... Claire and I had fun. Let me clarify.

Here is Claire's sketch of her design. Seems ambitious. 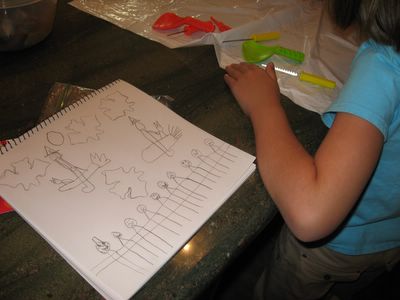 Here is Benjamin showing his enthusiasm for the project. 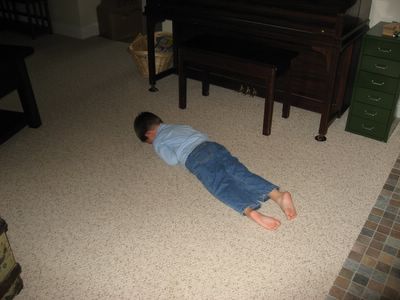 Here is Claire doing the least-favorite task of the carving of the pumpkins. 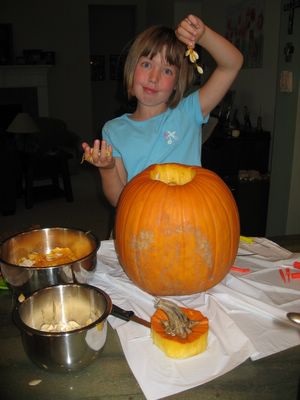 As an aside, it's funny what kind of sensory experiences can jog various memories. As I was scooping the gunk from the other pumpkin I was struck by how warm it was. The pumpkins had been sitting on the porch outside for a couple of weeks. It must have been in the 70s, so it was all toasty inside. This reminded me of when we carved pumpkins last year after they had been sitting on the porch IN MAINE for a couple of weeks. I had to run my hand under warm water every few minutes just so I could continue. Those pumpkins were nearly frozen!

Here is Benjamin setting up a bowling game with our Star Wars characters. Ding! An idea! 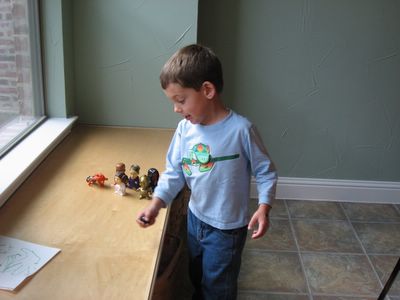 "Mommy, I want to carve a Darth Maul pumpkin!" 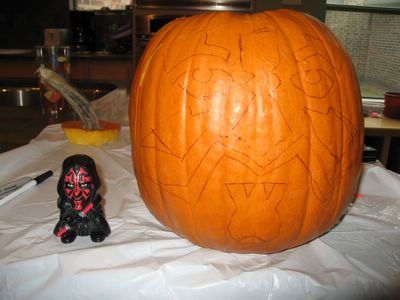 And when he said "I" of course he meant, "I want YOU to carve a Darth Maul pumpkin."

I added an extra ingredient to increase the merriment! 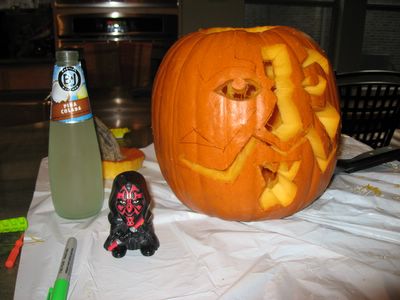 Benjamin makes his own merriment. 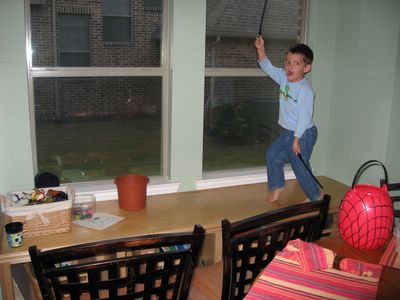 (By the way, that's the window seat that will be getting the striped cushion. Theorectically.) 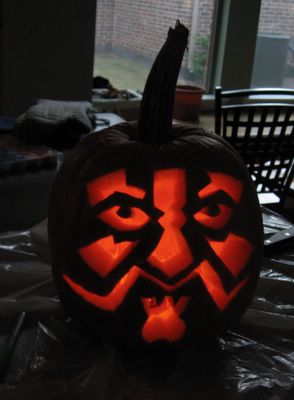 Finished Halloween scene with bats, moon, witch riding a broom stick and picket fence. Claire did this all by herself! I guess I underestimated the challenge of the drawing! 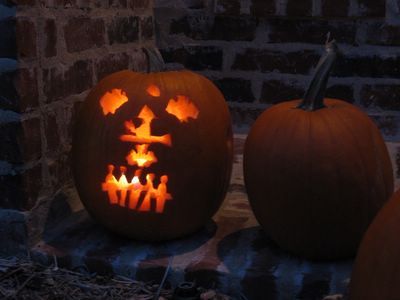 Here is our dinner from Halloween. The kids just thought it was so much fun. 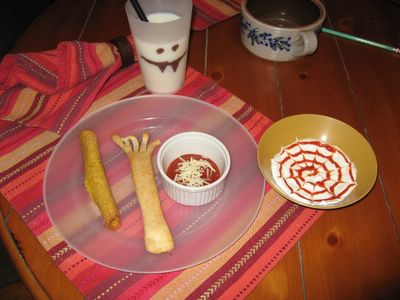 That's vampire-in-a-cup (chocolate painted on the inside of the cup and milk), a skeleton bone (chicken taquito), a witches broom (bread stick), bloody brew (salsa and cheese) and spider sauce (sour cream and ketchup).

I do have a couple of Thanksgiving pictures to share too. Maybe we'll get around to Christmas pictures sometime before Valentine's Day.
Posted by Deborah Boschert at 8:02 PM

Wonderful pictures and story! It is never a worng time to make a Grandma happy seeing her adorable grands!

Have you every made octopi out of hotdogs? Sitting on a bed of seaweed (lettuce)? Take a hotdog and cut up to little more than halfway, you can do four legs (2 cuts) or more, just be careful you don't make them too thin, they'll fall off. Then put them in boiling water and the "legs" will curl up and look all octopus-like. Give it a try, I did this with my pre-schoolers for Ocean week theme. They loved it.

Deb Your post and pics are hysterical. You are so creative! And...I'm loving your book.

I love that you have such creative fun with the kids. You are creating wonderful memories. Did you get a dusting of snow today or last night?

what great fun! i brought my pumpkins in the night before I carved..I've LEARNED from experience how awful it is to stick your hands inside a freezing pumpkin! Went by your old road last night and they're doing something major beside Riteaid, probably making room for another drug store or fast food, like we don't have enough already.

Deborah, what wonderful pictures and a wonderful family story. Good for you all.

You are such a good mom to do such fun things with your kids. Looks like a lot of fun. I am really impressed with the meal. Your creativity is astonishing!

How do you come up with all these wonderful ideas... especially the food? Gosh, I never had anything fun like that, and never heard of anyone who did!

Sigh. I am an inadequate mother sometimes. I love them and that is what counts, but gosh I wish I knew how to do fun stuff for my kids, stuff that they *like*!