I was lucky enough to participate in two classes at "Make it University" sponsored by Quilting Arts magazine. Or maybe it was sponsored by Cloth Paper Scissors magazine. Either way... fun fun fun!

These classes were offered right on the vendor floor throughout the day. You put your name in a fish bowl if you were interested in the class and 15 minutes before the start, they drew 25 names. Cost of each class was only $5. For me, it was fun to sit, create, relax, meet new people and do something other than browse the endless aisles of eye candy of the quilt and vendor type.

The first class I took was called "Surviving the Runway." It was inspired by Project Runway and editor Pokey Bolton walked us through the challenge. We started with a sealed envelope in which we found a quote. Here's mine. 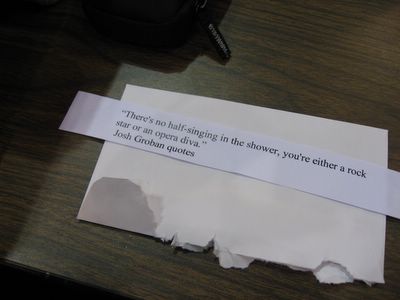 "There's no half-singing in the shower, you're either a rock star or an opera diva."

Then we were given this house template and experimented with various paints and collage techniques. You know how I feel about paint, right? Generally we are not too friendly. 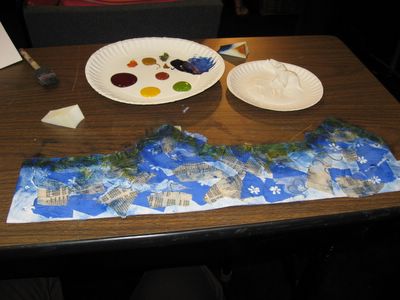 But it was good to stretch.

Thoughout the class we were given various challenges and other items which had to be incorporated into the house. Including a picture of ourselves that they took right as the class started. 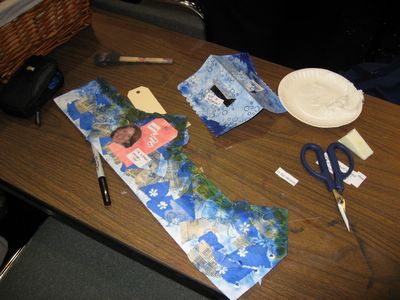 Here is my finished house. Mind you, this was created in just about an hour. I changed the quote to read "You're a rock star." I cut windows in the roof behind which I glued pictures of a butterfly and a glamorous face. 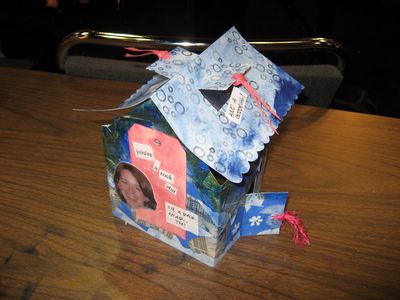 Then three "judges" were chosen from people who were watching the class and all the participants paraded around showing off their houses. We even had music like "Brick House" and "Our House" and "Burning Down the House." Good tunes!

It was fun. You can see the winning house on Pokey's blog here.

The other "Make it University" class was making this funky super cool bracelet with one of the ArtGirlz. Those wool beads are really nice. If we'd had more time we could have embellished the beads with more beads or buttons or tiny squares of felt. Ah... the possibilities! 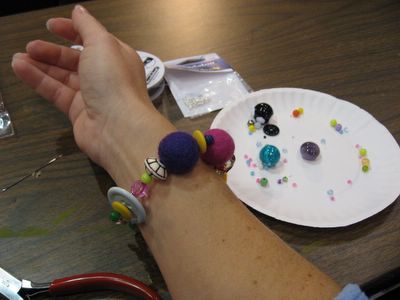 There was one woman who joined the class a bit late even though her name had not been called. She seemed a bit confused -- I think age and language barrier were at play. But eventually we found a place for her. We gathered up extra supplies and helped her with the wire and needles. She eventually shared with us that she was 91 years old -- and five months! We can only hope that we are ALL exploring Houston and creating when we are 91!

By the way...
I am so thrilled with the response for my book "Small Art Quilts: Designing a Series." I'm getting friendly with the folks at Kinko's and the Post Office. Thank you so much.
Posted by Deborah Boschert at 1:04 PM

yes, yes, yes I would like ist, be 91 Years old and exploring Houston und be creating!Let meet us in 35 years

Your house is a winner in my book! I love it!

I'm sure I will be that woman some day!! LOL! I can only hope.