Since many of my sister Artful Quilters Webring bloggers have written some great posts about the most recent Star Wars movie, I figured I should let you know what we think of Star Wars at our house.

Firstly, I'll admit, I didn't see the movie. Nor have I seen the last two -- which are actually the first two. Right? Of course, I saw the first three -- which are actually the last three -- when I was 12 (or whatever) and have thought little of them since. My delightful husband, on the other hand, must have been waiting for the last 20-something years for his true Star Wars mania partner. Well, he has found her in our delightful 6 year old daughter. Equally delightful three year old son is also glad to join in, though he calls it Car Wars.

Jeff took Benjamin to get his hair cut recently and one of the older episodes was playing on the tv at the mall, so they enjoyed watching while they waited for Benjamin's turn. There was no going back. The fire had been lit! Over the next few weeks they watched the first three which we have on VHS -- which means they had to watch on the upstairs tv since we only have DVD downstairs. Then rented the other two more recent ones. Claire was so taken with the story and the characters and Jeff loved filling her in on all the plot twists and turns and who was related to who and why. Benjamin liked Dark Bader.

Have you noticed that Burger King is issuing Star Wars characters with their kids' meals? And you can buy them separately without the kids' meal? Can you guess where this story is going? Jeff often stops at Burger King for a gigantic Diet Coke on his way to work. He always goes in and chats it up with the counter folks. My husband is nothing if not friendly! Apparently Burger King gets a set of five characters each week. They come in one big box with several of each of the five characters... but only five Darth Vaders (which open to reveal Anakin inside). Darth Vader is currently selling on ebay for about $25.

Remember I said Jeff's friendly? So each week someone at Burger King carefully sets aside the five new characters when the new box comes. Then Jeff buys them on Tuesday. And the precious Darth Vader character was even put in a secret spot in the back with his name on it. All these characters were collected in secret. Finally when he had 28 of them, he presented them to the kids. They were both in awe. Claire took Darth Vader to show and tell the next day. This was a big hit with her boy class mates!

Maybe it was the introduction to the Dark Side, but a big disagreement erupted between the two kids the next night. There was yelling, pushing, crying, tattletaling and general bad decision making and the characters all moved back into our closet for a day or so. We seem to have recovered and Good has prevailed.

Jeff took Claire to see the newest and last or third -- this is so confusing to me -- movie in the theater last week. He had seen it with a friend earlier in order to preview the level of appropriateness for a 6 year old. It's probably still a bit advanced, but they loved it! Jeff and Claire also went together to Burger King last week to get the last five characters.

Here's my own little Star Wars fan club with their new toys. 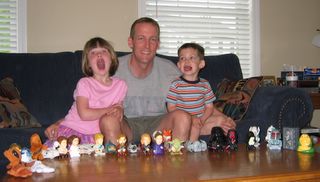 Posted by Deborah Boschert at 6:33 PM

I once fell asleep at a Star Wars movie - probably when one of my kids was twelve. I just can't get into science fiction. Stevie would love to go the latest with someone, but it is not going to be me. My kids are not really there either. Mark would rather go to a baseball game. So glad that I have a kindred spirit in you!!

YOu have THE CUTEST FAMILY. I agree with you and Gerrie.
Let's be girlfriends.

EVERYONE IS SO HAPPY!!! There's nothing like a houseful of Star Wars nerds.

Too much fun! I am soooo jealous of the toy collection! I forgot about them! Otherwise, I would've been there every day, LOL!

Well, isn't it great that they can share this? And just think, you can put on a Star Wars movie, mesmerize the whole family, and then go make art!

Star wars mania must run in the family. Uncle Bill and Aunt Kris love Star Wars too. I remember when jeff found darth vader and obi one canobi in the dirt of a baseball field when we were kids.