End of the School Year

Actually, Claire is in school until next Tuesday, June 21. They added 5 days because we had so many snow days. We're enjoying all kinds of end-of-the-year activities. Benjamin and I joined Claire's class on a walk to Dairy Queen last week. Very fun!

Then last Friday was field day. It was brilliant! Seriously! Amazing organized, creative, well-conceived and executed and FUN! "Space" was the theme so every class chose a team name, made t-shirts and banners and composed cheers. There were opening and closing ceremonies, including a rocket launch and all the games fit the space theme.

There was no competitive 50-yard dash or thee-legged race like there was when I was a kid. It was all about team work, being active and having fun.

Claire's class was the "Darth Invader Life Savers." Hmmm speculation is that Mr. Horne steered the voting a bit since he is a Star Wars nerd himself. (Admittedly.) But of course they were not Light Sabers, because you would never name your team after a weapon. 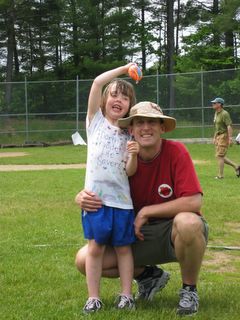 Jeff volunteered for the whole day and Benjamin and I joined in for the afternoon. So fun. Benjamin is embraced as everyone's little brother and loves the attention.

One game in particular was a blast. The class divided into four lines. Each line had to fill a bowl with water by having each member run up to a water tub with sponges in it, grab sponge, run back to team bowl, squeeze out water against your forehead into bowl. (Not about who fills their bowl first... just about filling the bowl.) Benjamin found a spare pail and went to the tub and filled up the whole pail, then each of the four teams were trying to convince him to come to their line and dump his water into their bowls. You can guess everyone got very wet. "I soaked!" Benjamin said. Then, "I no like soaked!!!" whining and crying. Then five minutes later giggling, "I soaked!! I love soaked."

Tax payers dollars... well spent. We are very lucky and thankful.
Posted by Deborah Boschert at 3:20 AM

What a terrific time! It's great to hear about (and see) something positive about a public school somewhere in the country. Thank goodness. How great to be able to involve your entire family. FUN FUN FUN!

It sounds like you all had a lot of fun!!! I used to DREAD Field Day as a kid. It usually involved some type of body coordination or dodgeball game playing skills that was beyond my abilities, lol.

I was thinking the same thing Elle said. I hated any kind of sport when I was a kid. I'm probably more active now than when I was in school. My siblings called me the house plant!! So glad to hear of a more pc style of games.

Glad they had such a great time. Joey's class when to Michigan's Adventure (an amusement park). It's nice when the entire grade can spend a fun day together! No pressure...jsut fun.