When we moved from Florida to Maine in the fall of 2003, I was struck by lots of differences. Obviously. I've posted a bit about my fascination with the beauty of the rocks up here. (And to make this quilt related I will say I'm working on a rock quilt. More of that later.) We also have this charming plant that inhabits our woods at the moment. They are called "fiddle heads." You can see why. But the fiddle doesn't last for long and then they're just ferns. Apparently they are tasty sauteed in olive oil and garlic. (Most stuff is...)

Fiddle heads in our woods 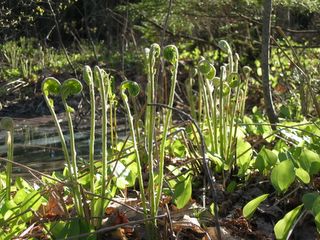 We also have this interesting natural phenomenon. I was alarmed that my friend Kate (who's husband is the state ecologist) hasn't visited The Desert of Maine. I told her I'd post some pix so so she could get a feel for it. She said she thought it was kind of kitchy and that's why they hadn't gone. It's definitely kitchy. You can buy plastic camels and other crap, but it's pretty cool too.

The Desert of Maine, taken on our visit last summer. They give the kids pails and buckets to play with while the adults can listen to the tour guide's spiel while driving around in that little tram. Pretty fun. 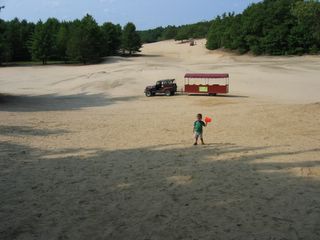 Here's a blurb for the Desert of Maine website.

"In 1797 the Tuttle family moved to the 300 acre farm that once covered the Desert of Maine where they successfully raised crops of potatoes and hay for several years. Failure to rotate crops thereafter, combined with massive land - clearing and overgrazing resulted in severe soil erosion that exposed this hidden Desert. As the spreading sand grew uncontrollable, the Tuttles surrendered, leaving the Desert to it's destiny."

It's not really sand, it's glacial silt. Finer than sand... and expansive.
Posted by Deborah Boschert at 6:21 PM

Glacial silt, very very cool. We also have fiddlehead ferns. I always used to paint an abstracted version of them (sort of a tall spiral thingy)and I want to do that again. We have Fiddleheads Cafe too. Sort of like your Little Dog. Anyway, the landscape in Maine is just beautiful. Melody posted the rock face pictures and all sorts of ideas started churning. We have something similar in up North in WI. It's exposed along the highway, an odd sight. I'm rambling.

I just love the name of it, The Desert of Maine. Sounds so unexpected! That fiddlehead picture is beautiful. That might make a nice image to carve on a lino block.hmmmmm

You're right, how unexpected and cool to have a "desert" in Maine!