I Finally Got Hello to Respond

You remember I told you it's been raining? I may not have also mentioned my itch to make something "traditional." You know, chain pieced, regular shaped blocks, commercial fabric -- maybe even from a line of coordinating designs, quilting that is just to hold it together and not necessarily artistic.

So, those desires combined with the fact that I planned to be watching several hours of garbage on tv inspired me to pull out these blocks.

I started them when I was pregnant with Benjamin. I took a class teaching methods from Jan Mullen's Cut Loose Quilts. That was before I realized that taking classes directly out of books is kind of a waste of time, unless I'm just paying for the luxery of several hours of uninterrupted time, a place to quilt and social interaction. (Which is not such a bad thing to spend money on.)

I ended up with the following blocks. Four large wonky blocks and 10 smaller. How to set them?

And this is what I came up with. Inspired by the fact that a real picnic is an impossiblity given 40 days and 40 nights of rain in Maine. 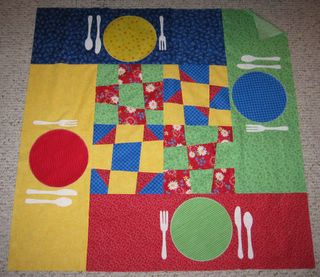 It really did make me feel brighter! I think it's coming along well. I pieced all this during the Tuesday night American Idol which reminded me that I much prefer listening to cover songs rather than originals and I can't imagine buying either Bo or Carrie's albums, but I might like to see them perform on the Today Show during their summer concert series.

Then also on Tuesday, I loved every minute of "Rob and Amber Get Married." I'm a sucker for that stuff. Thankfully they didn't stretch it out over several weeks like they did Trista and Ryan. (If you don't know who they are, it's not even worth finishing this paragraph. Just skip ahead.) How funny that Rob was weepy about the giant painting of the Red Sox signed by all the players that Amber gave him, but shed not a tear during the actual ceremony. They are young and beautiful and true publicity whores, but I still think they have a chance at a nice, long, happy marriage.

I continued to finish the machine button hole stitch around the plates and utensils on Wednesday during the Idol finale. But I did no sewing during the Alias finale. That needed my full attention. Yum... Michael Vartan, even if he is a bad guy.

Now, I'm making 12 more smaller blocks to add to the previously constucted ones that will be a 6 inch pieced border. I added some more fabrics for these blocks. I hope they all look ok together. Actually, it doesn't matter. This is a utilitarian project. Just get it done.

I'm not sure I'll actually use it as a picnic quilt. I think I might give it to Benjamin's teacher at the end of the year. He goes to a wonderful preschool in an old barn and farm house. It would be a great pretend play quilt.

I did make another complete quilt with techniques from that same book. It was Benjamin's baby quilt and still rests on his bed. It turned out really great. Maybe I'll post pix. That would be a bit retro. But, over all Mullen's technique takes more time and more fabric to make your blocks look wonky than if you measured and rotary cut and put them together straight. So, I guess that's not really an endorsement.
Posted by Deborah Boschert at 4:05 PM

What a great picnic table cloth you made!
I had trouble with Hello when I installed my new Norton Antivirus too. But a tiny adjustment allowed it to now work. In fact it keeps popping up whenever my DSL clicks on and off. grrr

A FABULOUS picnic quilt!! This is fun.

Yes, this is loads of fun. I love it!

what a GREAT quilt that would be for playgroup!

I'm with you on Jan's stuff taking time - I love the wonky look but don't do it very often because I get so frustrated!

TOO cute! Maybe if I'd had that quilt at a tender age, I could remember which side the fork goes on!