Before we leave Maryland, we decided to take a road trip to see a bunch of sites that we had not yet experienced. Here are several snap shots... they don't include all our stops and they may or may not be in order. But if I don't share them now, they could easily be set aside and never blogged about. That wouldn't be any fun, right?

We started by spending the fourth of July at the National Mall. The capitol at dusk... along with hundreds of thousands of other revelers! 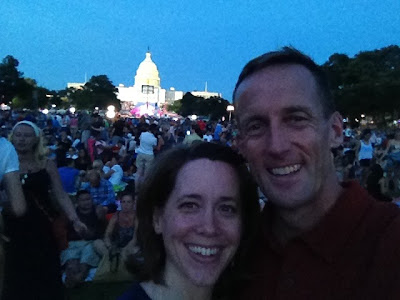 The fireworks just beyond the Washington Monument were fantastic. You might be able to tell that the monument is encased in scaffolding as they make repairs from the earthquake two summers ago. 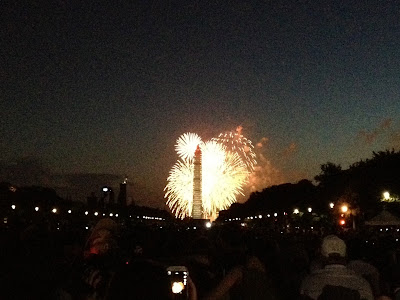 We also went to see the United States Marine Band as part of the Evening Parade at Marine Barracks in Washington, DC. My favorite part was hearing Stars and Stripes which was composed by John Phillips Sousa when he was director of the Marine Band at this exact barracks in 1899. 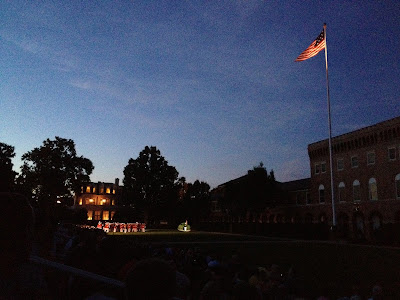 We had a great time at Monticello. It was especially interesting to compare the experiences of visiting Monticello, Jefferson's home, with Mount Vernon, Washington's home. 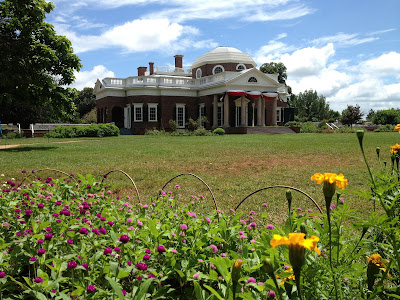 We stayed with Kristin LaFlamme and family in Charlottesville. Our kids seem to have a great time together -- as do the adults! This picture is from an excellent little sandwich (and wine) shop where I had the most amazing cold pear and peach soup topped with almonds. 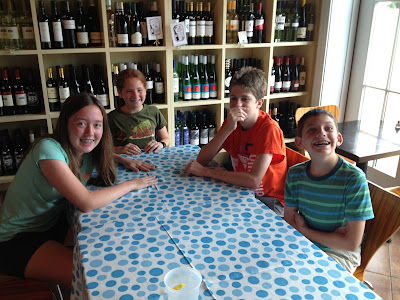 From Charlottesville, we headed to Shenandoah National Park. 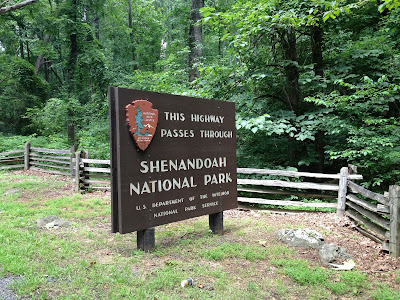 We did a bunch of hiking, which is one of my favorite things to do when we travel. 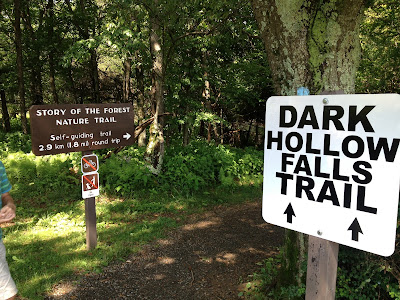 It's always fun when a hike leads to a waterfall. 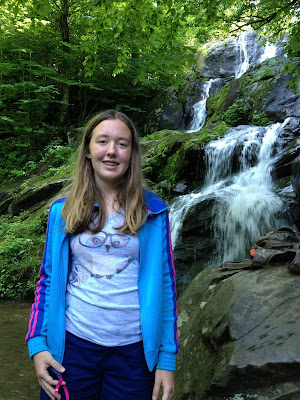 On another hike, Benjamin spent a bunch of time stacking and balancing rocks. 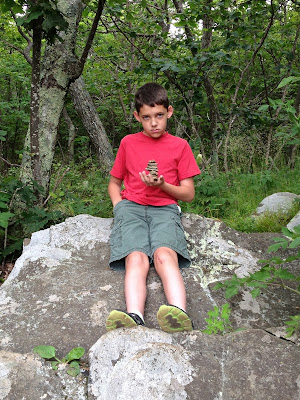 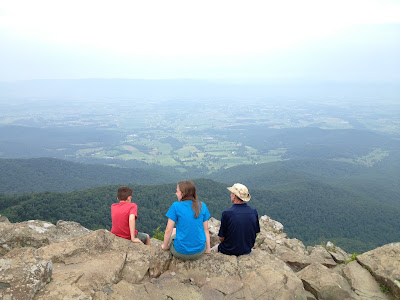 One of Benjamin's cairns stacked on a trail marker. 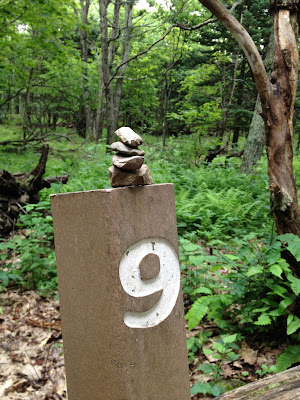 Claire and I relaxing at one of our stops on a particularly long hike including some parts of the Appalachian Trail. 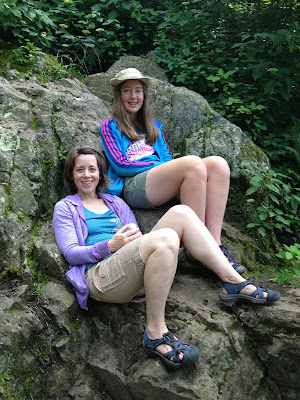 This is Big Meadows, the central "landmark" in Shenandoah National Park. 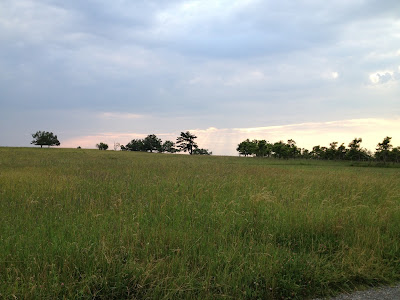 We enjoyed a hike through the meadow at dusk, with several deer. 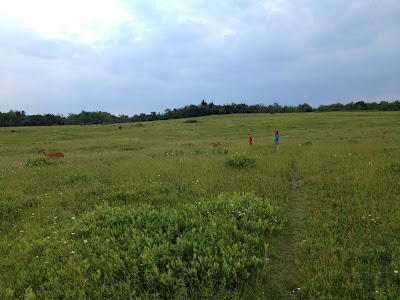 Our next stop was Luray Caverns! 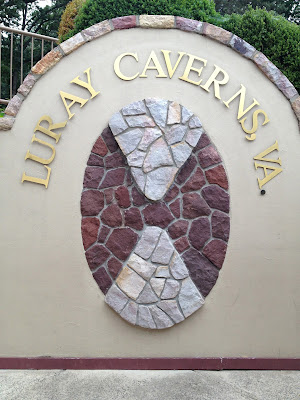 I loved the cave! It was so cool -- corny and touristy, but quite spectacular. 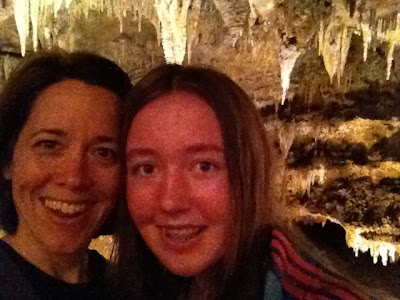 There is even an organ in the cave. Wacky, right? 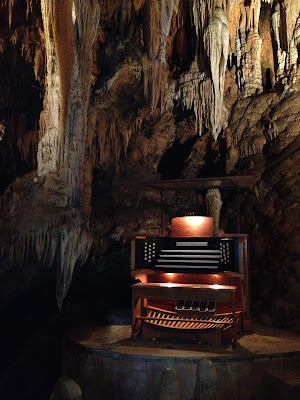 There was also a big garden maze outside the caverns. Claire and Benjamin succeeded in getting all four stamps! 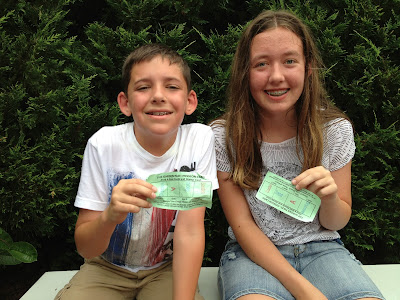 We also visited Harper's Ferry and enjoyed lots of exhibits and films about major events leading up to the Civil War. Old stone steps leading out of the old town area (where I bought a fabulous pair of ceramic earrings at a wonderful little pottery shop). 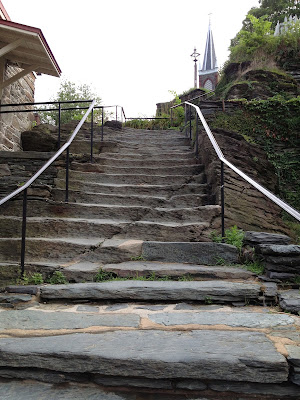 We also went white water rafting and ziplining in Harpers Ferry, but all those pictures are on Jeff's camera.

Next stop: Gettysburg. What an impressive place. I enjoyed it so much -- especially the excellent tour we had of the entire battlefield. Not too many pictures, but here are Claire and Benjamin with Abe. 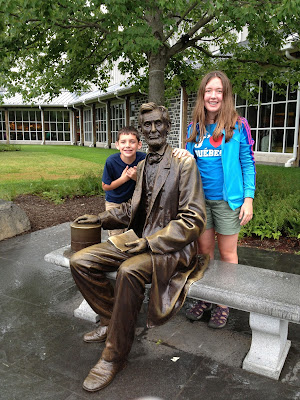 For dinner in Gettysburg, we chose  The Blue and Gray bar and grill where all the burgers are named after generals who fought at Gettysburg. 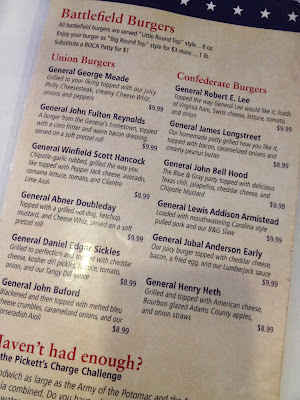 The burgers are each served with flags according to which side they fought on. 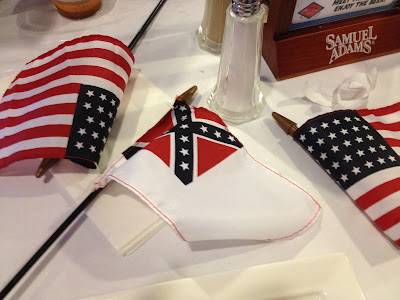 From Gettysburg, we swung through Lancaster, PA where we had lunch at Rachel's as recommended by Sue Reno. Lancaster is a fun town. I'd like to spend more time there. 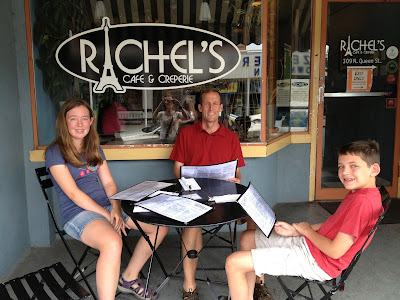 Our last two days were spent at Rehoboth Beach in Delaware. It's so hard to get pictures at the beach. I always worry the camera is going to get wet and sandy. Even you don't see pictures, you can trust we had a great time. Our last stop on the way back to Maryland was The Fractured Prune donut shop where they fry the donuts fresh for you and top them with glazes and toppings of your choice. Yum! 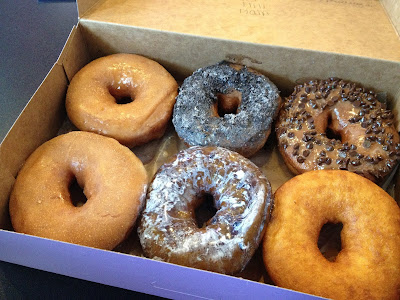 We visited Maryland, DC, Virginia, West Virginia, Pennsylvania and Delaware. In the next week we'll also hit Kentucky, Indiana, Illinois, Missouri and Oklahoma as we make our official move back to Texas.
Posted by Deborah Boschert at 6:15 PM

You certainly hit some high spots! We have wonderful memories of visiting so many of those places ourselves. Wishing you all the best during this time of transition.

This brought back great memories for me,I am from that area!

I am glad you had a great trip, MD will miss you. Me too

What a fab trip! Safe travels to Texas!

Looks like fun! Have a safe trip back to Texas!