If you follow me on Facebook, you know Benjamin broke his leg on October 11 and had surgery to repair his fractured tibia on October 19. He was out of school that entire time. Today is his first day back and he's going in style!

For Halloween, he came up with the genius idea of dressing as the "lame goblin" from the board game Munchkin Quest. 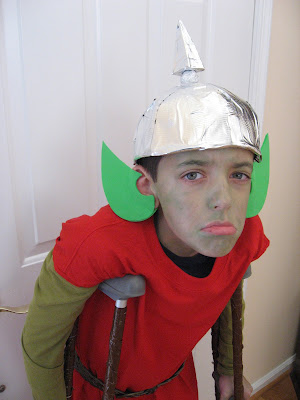 We had a great time putting together this costume. I think the helmet is the best part! 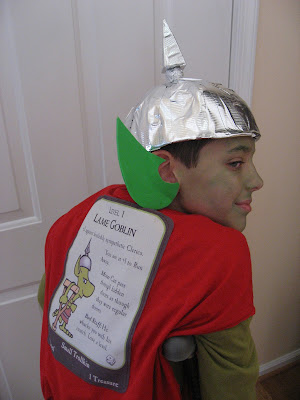 I scanned the "lame goblin" card from the game, printed it on pre-treated fabric, and sewed it to the back of his tunic (red t-shirt).

How silly are those ears?! They are made from sticky-back fun foam and stuck right to his ears.

Here is Benjamin striking the pose from the game card. It's a pretty good likeness, don't you think? Except he broke the wrong leg. 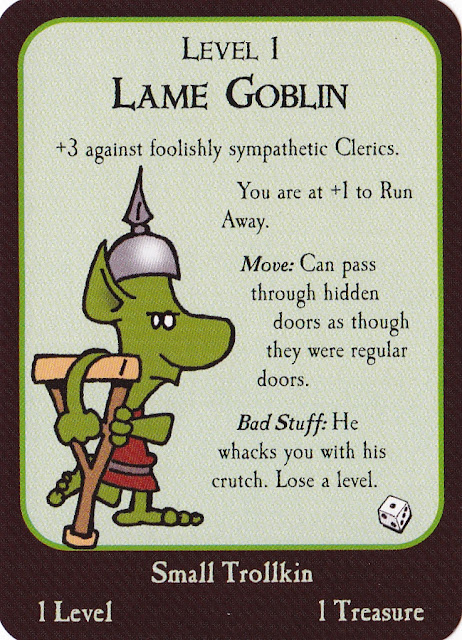 Posted by Deborah Boschert at 11:26 AM

This is awesome! Way to turn lemons into lemonade Ben! And how great he gets to wear his costume to school - that is a no-no in our school district (until high school...then they can with a lot of restrictions like your face has to show, no fake weapons, blah blah blah). My Logan would love to wear his to school today! Hope you have great trick or treating weather later today!

Way to go Benjamin! So glad he's able to make it to school for the Halloween festivities. Ours have been pushed back to Friday, so I'll be missing the big parade.

I can't believe that there actually is a Lame Goblin character -- I thought he was a goblin that happened to be lame! It's too cool that he could work his crutch into his costume. I LOVE the ears! They are great.

Hehe, what a fun little trollkin he is, great outfit!