So, remember I said I was looking for something unique and special for our unique and special teenager? I began by trying to find a place for horseback trail rides and eventually made my way to googling "adventures in DC" and came upon Ravenchase Adventures.

Their website says, "If you liked the DaVinci Code, Goonies, National Treasure or Harry Potter, you'll love Ravenchase Adventures!" Well, YES! They just happened to have an event schedule for May 5 -- Claire's actual birthday -- in Richmond, VA. So off we went.

Seventeen teams of 2 to 6 players each met at the Robert E Lee Monument in Richmond where we were given a backpack including five clues, a treasure map, a black light, a small portable radio and a lighter. We were told that we did not have to complete the five clues in any specific order, but that we should find a puzzle piece at a secret location to be determined by solving the clue. Then this puzzle would be put together to reveal an additional code to be deciphered.

The clues were tough! They involved things like counting the number of stars on a statue, dividing by the number of Grand Slams won by Arthur Ashe (native of Richmond) and tuning into that frequency on the radio to hear a clue directing us to a different location.

One clue said to look for the "saddest horse you ever did see." We found him outside the Virginia Historical Society. 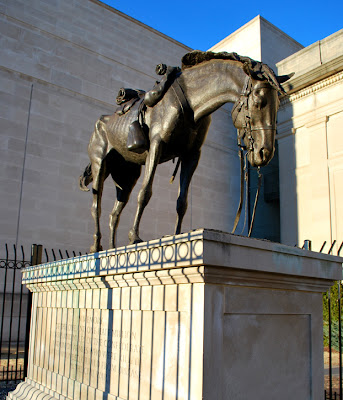 Later we had to seek out the grave of the fifth president, write out the first 50 letters from the plaque on his grave, then use a numerical code to direct us to the location of the puzzle piece. Here's James Monroe. 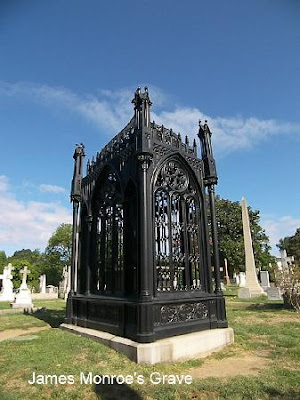 I didn't actually take pictures during the race these are various google images. We were too focused on looking up info, reading maps, scoping out other teams and deciphering clues. The final clue involved information that could only be read under black light, or after being rubbed with an ice cube or heated with a flame. But, believe me... it's not like the clue said "apply ice here." Or "use the lighter here." Everything was in code!

Eventually we were lead to the Globe Hopper coffee shop where we were supposed to breathe on a mirror to reveal a clue. 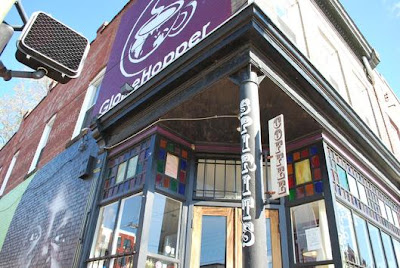 Claire and I nearly hyperventilated in the bathroom and had no luck finding anything. Then Jeff came in and saw a mirror hanging on the wall amongst other pictures and coffee-shop decor. Duh. Eventually we made our way to the final destination... a great little local bar and grill where we enjoyed drinks and socializing with the other teams. 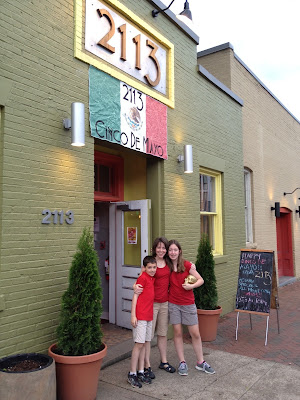 We won fourth place! Our prize was a fabulously tacky golden skull. The race organizer generally only awards prizes to the top three teams, but he was particularly impressed with our finish and by our super smart kids! Apparently, he's got a stash of golden skulls for just such an occasion. 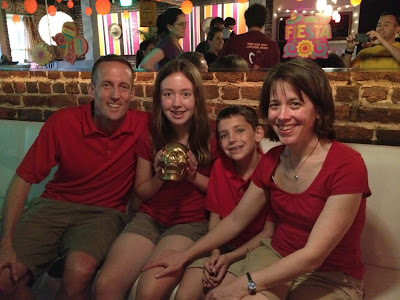 In fact, I'd say only 7 or 8 teams actually deciphered, located, uncovered and finished all five clues. Some teams called in for the location of the party once they got stuck. The whole race took about 3 hours.

It was funny how we settled into various roles as we went along the race. Claire and I did all the deciphering, matching numbers with letters and words. Jeff kept his nose in his iPad looking up key passages in the clue and trying to match them to logical locations. Benjamin was on constant look out for time-chips. These were poker chips that were hidden along the race that would take 15 minutes off your time. He found two!

We all had a great time and spent lots of time discussing all the clues and excitement and funny things that happened throughout the day. Claire even said she would like to do it for her next birthday!
Posted by Deborah Boschert at 6:08 PM

What a great present - bet she remembers that for the rest of her life! Think kids remember those days more than any other type of gift you could buy.

How very fun and how very, very Boschert! Belated Happy Birthday to Claire.

If you guys do it again next year, we'll join you! I'm not sure we're quite clever enough, but we're up for adventure!

Oh my, what fun! My husband and I got a chance to do a scavenger hunt with some friends in England. One of our clues was an actual millstone. Our team came in second.

Totally cool awesome and wonderful! And hope there was a good amount of cake, ice cream and/or chocolate involved at some point!

What a wonderful birthday adventure -- and a gift for the whole family! What a great way to create a fun day and a lasting memory! (I'll be watching for you guys on The Amazing Race one of these days...)

We used to do ravenchase back before we were married - they're always fun and really well put together! I've done one at Busch Gardens, in Norfolk and Richmond. I'd love to do a DC one day, but that may mean waiting until the kids are a little older! It always helped us if there was at least one person just willing to do the driving so other people could focus on clues. Although now I have a smart phone, so it seems like we'd either get the clues faster or be led further astray. Back then we'd call people to google things for us.

Belated Birthday Wishes to Claire! Your birthday adventure sounds wonderful! I am still trying to wrap my brain around the fact that Claire is 13!!! Next thing I know Kristin's Katya will be graduating from college! Wishing Claire more fun and excitement in her 13th year.