Aboard a French Schooner

When we decided to move to Maryland, we were eager to take advantage of whatever unique opportunities presented themselves. Jeff was recently invited to a reception aboard a French navy schooner -- so, of course, we said "yes!"

Jeff plays squash with another instructor at the Naval Academy who is also an officer in the French navy. (There are many international exchange instructors and students at the Academy.) So, that's why he got invited. Isn't it nice to have such lovely benefits from unexpected connections?

Here is the Belle Poule a French schooner used as a trainer vessel for the French navy. She docked in the Severn River at the Naval Academy. All those clouds brought lots of rain earlier in the day, but it was dry for the reception. 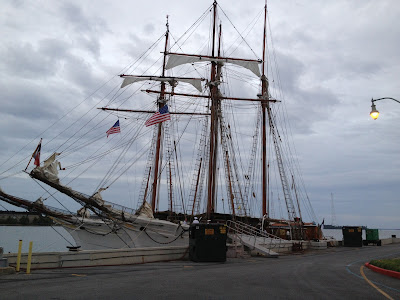 Spiked heels were forbidden because of the wood deck. I wore flat strappy sandals which you can't see in this picture. 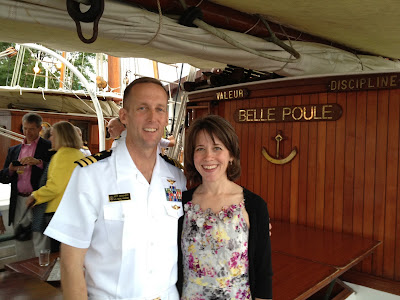 Delicious little pastries for dessert -- and simple decorative French and US flags. 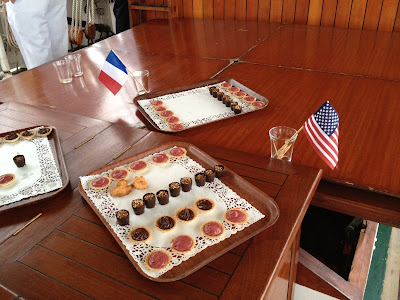 It was a really fun evening. We enjoyed chatting with several of Jeff's colleagues and a few of the French sailors. Several of them were smoking cigarettes and had beards! Not something you see much in the US Navy.
Posted by Deborah Boschert at 11:45 AM

Thank you for sharing your family and your adventures with us. It is so nice to hear about connected families who enjoy each other.