I began working on a large new art quilt this week. It's been stirring around in my brain for weeks and weeks. I had ideas but nothing seemed right. I was feeling so much doubt and frustration and I hadn't even touched a single piece of fabric.

And then I just started and everything became clear. I chose an unexpected combination of fabrics and and began fusing and cutting and composing.

After the background was set, I knew where to go next. Each step became clear as I approached it. 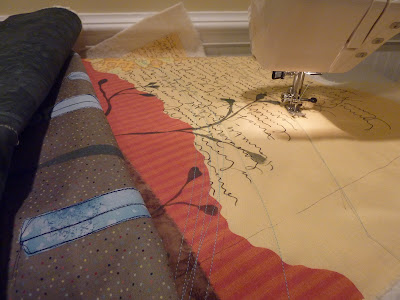 Here's a peek. I was stitching an arch over the top of the composition. You've noticed I do that quite regularly now?

There are still several more steps before completion. I'm not kidding myself and thinking I'll continue on this easy, obvious path of clarity. The quilt will probably turn its back on me a bit before it's done. That's ok. I know how to return to the pondering and patient stages of creating art.
Posted by Deborah Boschert at 11:01 PM

I love it when the path becomes clear, even if it's only for a little while! I'm waiting for that to happen on my metamorphosis quilt.

I like what I see. I hope the stumbling blocks are short and you continue easily forward.