I've been so productive this week! It's that fine line between having enough to do that I must work efficiently, but not have so much to do that I get overwhelmed and shut down. I've been doing my "real job" designing and editing a 16 page church newsletter and taking short breaks for arty stuff.

I have been frustrated that I haven't been able to get as much done in the evenings as I used to. Most days, after I get the kids in bed, I get sucked into the couch and the television and can barely make it more than an hour or so.

Yesterday I solved this trouble by having a tiny cup of coffee after dinner. That definetely did the trick and I was able to get everything set for the Valentine atc swap I signed up for. 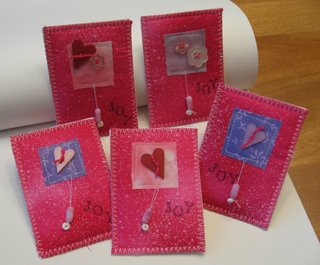 Here is my sweet little series. I just love making atc's from fabric. I zigged them onto cardstock for some body. Plus, that makes it easy to sign and date the back. I used the same word as I did on all my Christmas atc's. JOY! It works for every holiday, don't you think?

Amy put a spin on the swap by asking us to include some little goodies to go along with the atc's. I decided to jazz up some match boxes. 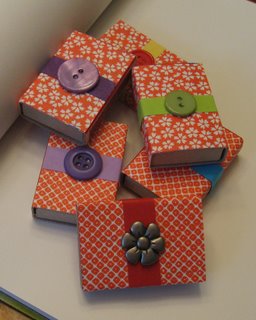 Wouldn't it be fun to light some candles for a romantic Valentine dinner with matches from one of these pretty little boxes?

I also finished quilting tall skinny. I blocked it yesterday, so now it needs to be trimmed and I can start some more surface embellishment. The Klimt inspired quilting motifs were really fun, but I'm eager to get back to some simple hand embroidery. Ah... the list is long.

Posted by Deborah Boschert at 10:41 AM

Look at you go! All that and time to judge an essay contest, too. You truly are superfantanstic!

I love your Valentine's cards - they are really cute. The decorated matchbox was a brilliant idea. That would be a nice thing to make to give with candles at Christmas. I wonder if I can remember that????

Deborah, I was so pleased to find out I had won Sonji's bundle and that you were the judge. Here's my "thank you" tribute to you both!

Bundle, bundle, what a surprise
I hardly can believe my eyes!
You are coming home to me to stay
I can’t wait to put you on display!

Sonji and Deborah, ya’ll are the best
Thank you so much, I sure feel blessed!

****
And I just wanted you to know that your Valentine ATCs are awesome and your treats are spectacular! What a great idea!

What?! You were the judge and I didn't win with my silly old lady story! Love the ATC's. I just carved some heart stamps and am about to make some Valentine postcards.

I love them all, especially those little boxes! You're full of good stuff...and when did the new picture arrive? You look happy!