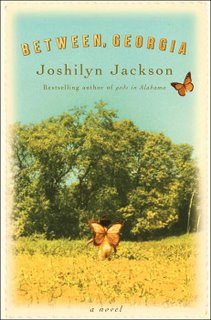 I'm still on vacation. We're heading home tomorrow. It's been wonderful! (Thank you for all your comments on my blog! I haven't had time to respond to all of them, but I was thrilled that you all liked the labor and delivery piece.)

Just one of the many delights on our vacation was the one book I brought along to read: Between, Georgia by Joshilyn Jackson.

I've included a picture so that the next time you are at a bookstore and you see that cover, you'll think, "Oh I saw that on Deborah's Journal and she said it was amazing. I must buy it!"

It really was great. I was spilling over with that wonderful tension of wanting to read quickly so I could find out what would happen to all the characters and yet wanting to read slowly to savor to entertaining, whimsical, funny, thoughtful, rich, surprising writing.

I finished it in less than a week amidst visiting relatives and lots of changing in and out of wet swimming suits. So I guess I found a good pace for reading.

Joshilyn also has a blog so I loved having the tiniest bit of insight into her as a person and her personal life... it made me raise my eyebrows a bit as I was reading.

I'm planning ahead right now to see Joshilyn on the red carpet at the 2009 Academy Awards. (I'll give Hollywood another three years to make the movie.) This book has all the makings of an incredible screen play. I don't say that to discount its perfection as a novel.

I think I may have even liked it more than her first novel, gods in Alabama. But, if you haven't read that... buy it also. Or order them both from Amazon. That will qualify you for the free shipping.

Thanks to Diane and DebR who initially introduced my to Joshilyn. Ah... the endless benefits of blogging!
Posted by Deborah Boschert at 9:31 PM

Glad to hear you're having a nice vacation! We are experiencing a bit of Texas weather, I think, in western Mass at the moment. Hot, hot, hot, and HUMID. The cut the air with a knife kind of humid.

Enjoy the rest of your vacation!

happy to hear you're having a good vacation and about between, georgia...you know after reading a book that's SO GOOD you just know you'll never find another as good as this one? I'm STUCK in that spot. Totally.

I loved it too. I think both Joss's books would make fabulous movies IF they got a writer, director, and actors who would do them right and not Hollywoodize them to the point of ruining them.

If you are looking for surreal reading that is visually stimulating, give Barbara Hodgson a try. The Tatooed Map, The Sensualist, Hippolyte's Island (I think), and a fourth that I have completely forgotten the title of. Her books are illustrated novels but not in the graphic-novel way. She's one I keep a weather eye out for every time I go to the bookstore.

By the way, Rockstar and Project Runway dishes on my blog:)