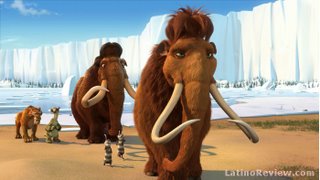 We went to see Ice Age 2 recently. We'd really been looking forward to it since we all liked the original. It was a bit of a let down. The kids liked it, but they like anything. I won't give you a detailed review because what I really want to talk about it one teeny tiney bit of dialog.

It seems that Manny and Ellie (voiced by Queen Latifa) are the last mammonths on the face of the earth. You can imagine the direction that takes with implications of reproduction.

So, Manny is trying to charm Ellie and she is putting him off in complete Latifa style. Then there is a pause and one of the wiley possum brothers rolls his eyes and shouts out, "Pervert!" at Manny. It's not uttered under his breath or a side note in the action. It's right out there loud and clear for everyone to hear and ponder. Then Claire, who is almost 7, said to Jeff, "What's a pervert?"

I was so frustrated and disappointed and angry, really. Jeff told her a pervert is someone who does something weird. Which is a pretty good response on the spot in the middle of theater. But, of course, that's not really what a pervert is.

Ok, so what's perversion? Well, I guess that's your business in your own bedroom. But, I think we can all agree that procreation is not a perversion.

But, the point isn't even what the word means. It's that it's totally inappropriate content for children in an age where real perverts prey on children every day and our concept of sexuality is so twisted that 7 year olds are having birthday parties where they dress up as "rock stars" (or strippers...) and trot about in skimpy, glittery clothes.

Maybe that's a digression. I don't know. I'm just doing the best I can to raise my daughter to be well-rounded and informed, but "pervert?" I don't consider myself a prude and I'm certainly not a conservative, but I do wonder how the makers of this movie decided to go that direction.

Apparently, I'm not the only one who thought it was pretty misguided. Read this. Or this. Or this.
Posted by Deborah Boschert at 8:39 AM

I'm with you! I can't wait for the pendulum to swing back the other way and stop gearing kids' movies towards their parents. We're mature enough to be able to sit through a movie without sexual innuendo for the sake of our kids, aren't we? My kids (4 and 7) have seen very few movies, and those they've seen have been with friends and not me. We rely mostly on videos of PBS-type shows. No sexual innuendo and very little drama/suspense (my 7-year old is still very sensitive to suspense). We don't watch TV either and Cartoon Network is absolutely off-limits. Hubby and I watched the newest King Kong on DVD and I thought that even that had more gratuitous violence and gross-out than necessary. The bug scene pretty much ruined the movie for me. I was loving up till then and then decided that they had gone too far. I am no longer entertained.

I agree with Kristin. They throw these things in for the adult going to the movie with the small kids--assuming that the sexual stuff will "go over the kid's heads".

Who wants to end an afternoon at the movies with a discussion of "what's a pervert?"

I think this is why my daughter does not let her children see movies unless she has screened them first so they have never been to a movie theater. I often think about how shocked my Mom and my grandma would be by what passes for entertainment these days.

I agree with you! And kudos to Jeff for fast thinking and handling that as well as it could be handled in the circumstances.

I saw that movie too and was totally let down as you were. I do remember some of the language and content not being what I thought was appropriate for a G movie, but I can't remember specifics. I have found myself telling my kids after we watched a movie like this, that "that's not real life," or "it's not appropriate to talk like that." It's too bad too. I don't think movie makers have to go there for the sake of entertainment. It seems to just get harder as time goes on. My kids 10, 7, and 5 have all seen things I really wished they hadn't. My hope for them is that they learn to discriminate "good entertainment" from "unhealthy entertainment."

I'm sorry you had a bad time. My ten-year-old also wondered what a pervert was, and I gave her the dictionary definition, but I could tell she wanted specifics, and I wasn't going there.
Have you taken them to see The Chronicles of Narnia yet? This is such a good, wholesome film. Lots to talk about without it getting icky.

I don't remember the first one having any of that and we watched it with our sons and grandaughters and had the best time. I was really looking forward to this... why did they fix something that wasn't broke? It didn't need any of that. How sad.

Deborah, I was glad to read your blog on this, because we were thinking of heading to the "foreign film theatre" with the kids to see it. Yuck. Talk to you later! Lucy