We've had a wonderful holiday weekend thus far... and there's still more to enjoy. We had our first snow of the season and the kids insisted on going out to play now now now. Unfortunately, I couldn't find Claire's snow pants or Benjamin's snow boots. Grrr. Oh well, they didn't freeze. 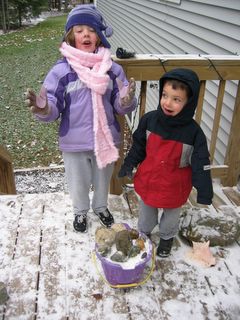 In this picture, Claire and Benjamin made a "cake" in a bucket with snow and rocks to celebrate "Snow's birthday." And then they sang. Funny!

Even more snow came the next day. I was able to do the whole bundle routine a bit quicker that morning... first snow pants, then boots, then mittens, then the coat -- shoving the mittens through the sleeves so you have a good seal at the wrist, then the hat, then the hood pulled up over the hat so the snow doesn't creep down the back of the neck. Of course, my expertise in this routine will be useless when we move to Dallas. 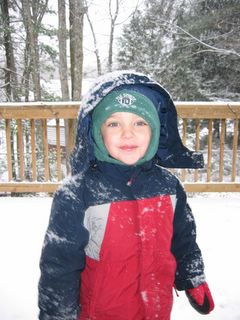 And then there was the cooking. It was just the four of us -- very special since Dad's been away for several weeks. We (I mean "I") did turkey, stuffing, mashed potatos and green beans. Benjamin made a pie at school, so we had that too. Or at least Claire, Benjamin and Jeff had pie. I'm not so much for the pumpkin pie, but I indulged in a few of the Choxie truffles Jeff's brought for me. Yum. 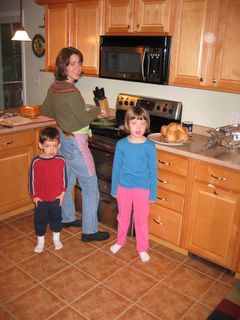 The we sang the Appleseed song, like we do before every meal, and we ate! 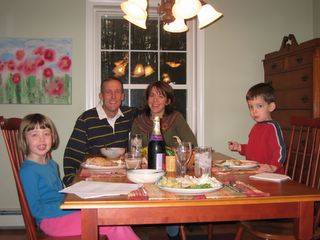 While we sat at the table, Claire read to us from her "Thankful Book" that she made at school. Actually, that was my very favorite moment of the day. And Benjamin chimed in that he is thankful for Baby Jesus. Excellent... getting ready for Advent!

We are richly blessed.
Posted by Deborah Boschert at 5:46 PM

No doubt the cutest family in blogland. Happy Thanksgiving and I am thankful for You!

It is the best to have a close family gathering, isn't it? Your family is so adorable. I know that you never tire of hearing this. Cute is cute. That's just the way it is. I am in awe of the snow cake that your lovely children made. And a song? FANTABAMUNDO! Happy, happy.

Wonderful pictures and story of your Thanksgiving Day! Of course I have tears in my eyes... I can't wait to see Claire's Thankful book - I know it had a colorful title page!
Christmas will soon be here when we are all together.
Love, Mom

Soooooo cute! Glad you had a nice holiday!

I'm sure you are cherishing these times...they go by so fast. Beautiful family!