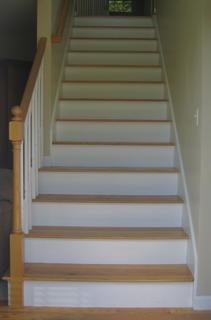 I cleaned our hard wood stairs yesterday. I mean really cleaned. Stair by stair with the hardwood cleaner and a cloth, by hand. They look beautiful. I also cleaned the walls with the Magic Sponge. Grimy hands constantly going up and down make for messy walls. As I was cleaning, I was thinking about the stairs and our home. Moving to a new home (which will have carpeted stairs.) Ups and downs. You see the metaphors here.

First I had to decide whether to clean going up or coming down. Of course, coming down is the right answer. Then I could brush all the crumbs, hair and dust down to the next stair again and again and just dust-bust it at the bottom.

Then I was feeling melancholy about the fact that there is no dog hair on the steps. I still miss our beloved black lab, Isaac, who died almost 2 years ago. I don't really miss the dog hair though. Hard wood stairs are dog hair magnets. Even worst than kitchen tile floor corners because you are not at eye level with the kitchen floor, unlike when you are walking upstairs and you get a close up view of the state of each step. We'll get a new dog when we move to Texas.

So, since I was feeling nostalgic, I replayed the worst stair incident in my mind. When Benjamin was 22 months old, he fell all the way down the stairs. Not bump bump bump on his bottom like a tobaggan, but head over heads slamming into several stairs along the way. I know this because I saw it all happen just out of arms reach.

Benjamin has a "lovey" stuffed frog. When we moved into this house, he got into the habit of tossing Froggy down the stairs so he would have his hands free to hold the railing. That morning, I watched him wind up his pitching arm, then step and completely lose his balance. I reached and screamed at the same time. He was wearing his red striped union-suit pajamas.

Jeff had not left for work yet and was able to practically meet him at the bottom after hearing my scream. He scooped him up. Benjamin was crying, of course, and had a bloody mouth. We quickly noticed one tooth was poking out funny. There did not appear to be any significant injuries. No cracked skull or broken bones. Thankfully. I still imagine that we could have had a big pool of blood that morning. We are blessed.

Claire had been to the dentist just earlier in the week. The dentist's business card was still sitting on the counter. I do not believe this is just a coincidence. It was a tiny miracle I needed at that moment. We called the dentist and rushed off still in bloody pajamas. Before we left, we found another tooth on the stairs. The whole tooth, root and all, like you see in a model at the dentist's office.

We thought the dentist might be able to save the other tooth that was hanging out. Not a chance, he just yanked it right out with his bare hands. More crying. The dentist also said this was one of the worst injuries he had ever seen, other than kids who go through car windshields in accidents. And that actually it was lucky to lose teeth, because that meant that the teeth took the brunt of the impact rather than the jaw. Or other body parts. 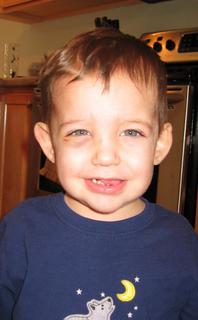 Later in the day we went to see the pediatrician to check for concussion or other injuries. He was fine... other than some bruises and the gap in his mouth. You can see the particularly bruised right eye here and the tongue creeping over the gap on the left. Poor guy. He has also recently lost a third tooth which we believe is still part of that original impact.

We put a gate at the top of the stairs the next day. 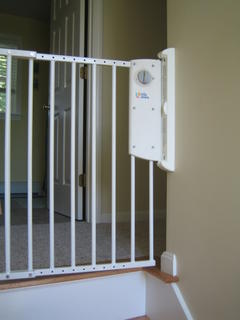 Posted by Deborah Boschert at 8:13 AM

OMIGOD Deborah! You have inadvertenly saved my life, prevented total quadroplegia, or my becoming a vegetable. I have stumbled on my staircase way too many times. Stepping on black cats on stairs in the middle of the night and slipping down three stairs at a time in my wool socks. A gate like that with a swing open door is just what the doctor ordered before I become paralyzed for life!
Name the brand please and where can I get one.

OMG! That story gave me the shivers. I can't even imagine how terrifying that must have been. Thank goodness Benjamin didn't do anything worse than lose some teeth!

That is one tough little guy!! We have had our share of stair tumbles, one time with Steve holding Lisa - he fell down, but basically did the rump bump. They didn't have those nice gates back in my mothering day!!