It Will Be A Long Wait

Remember I did those three small alphabet sketches in response to Somerset Studio's call for Lettering Using Usual Tools? Well, I actually sent them in along with two other small pieces that fit the theme.

Then I got an email from the editor of Somerset Studio, Jenny Doh, saying my work was *outstanding* and would certainly be included in their "Lively Art of Lettering" section! I was so thrilled!

They will be in Mar/April 2006 issue. Oh my gosh, there are a lot of trips to the mailbox between now and then. Oh well, still thrilled!

I had intended to share pictures of those other two pieces when I returned from house hunting in TX. You know, trying to spread out sharing the artwork so it seems like I'm making stuff regularly rather than in spurts. And then I discovered that I didn't take pictures of them before I sent them off. Grrrrr.

Anyway, here is an OLD in progress shot. I added borders and quilted. 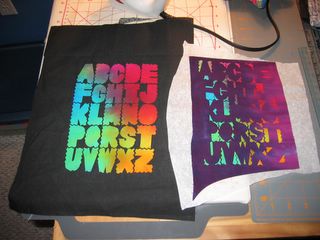 I liked the idea that when asked to use an "unusal tool" for making letters, I went straight for the scissors and sewing machine needle. What about you... any letter quilts in your personal gallery of work?
Posted by Deborah Boschert at 10:25 PM

I DEFINITELY have some letter quilts - check out my blog entries for 30 July and 18 August to see two of my samplers. Congrats on your future publication.

Congratulations! That's very exciting news--published. I'm amused that the sewing machine is considered an "unusual tool" but I suppose in the calligraphy world, it is! CAn we expect to see a series?! We'll all say we knew you before you were a famous alphabet fiber artist!

Just my number quilt. Congrats! Did you know that I have a post card in the current issue of Cloth Paper Scissors? I was excited, too. And I didn't even submit it, Karey Bresenhan did!

Way to go! Keep up the good work!

Yes, I remember the alphabet post. Thought they looked cool. But the vareigated letters look great too!