I did it! I made all ten soups from Real Simple magazine's "ten ideas for soup."

I was putting off the last soup: Tomato Soup with Parmesan and Croutons. There wasn't anything particularly notable or exciting about the recipe. Plus, Jeff hates tomato soup and kept hoping I would make it one night when he was away.

To compensate for the potential failure, I served it with a hearty salad with spinach, grilled chicken, apples, pecans and goat cheese. (So if anyone didn't like it, they wouldn't starve.)

Here's my soup and salad. 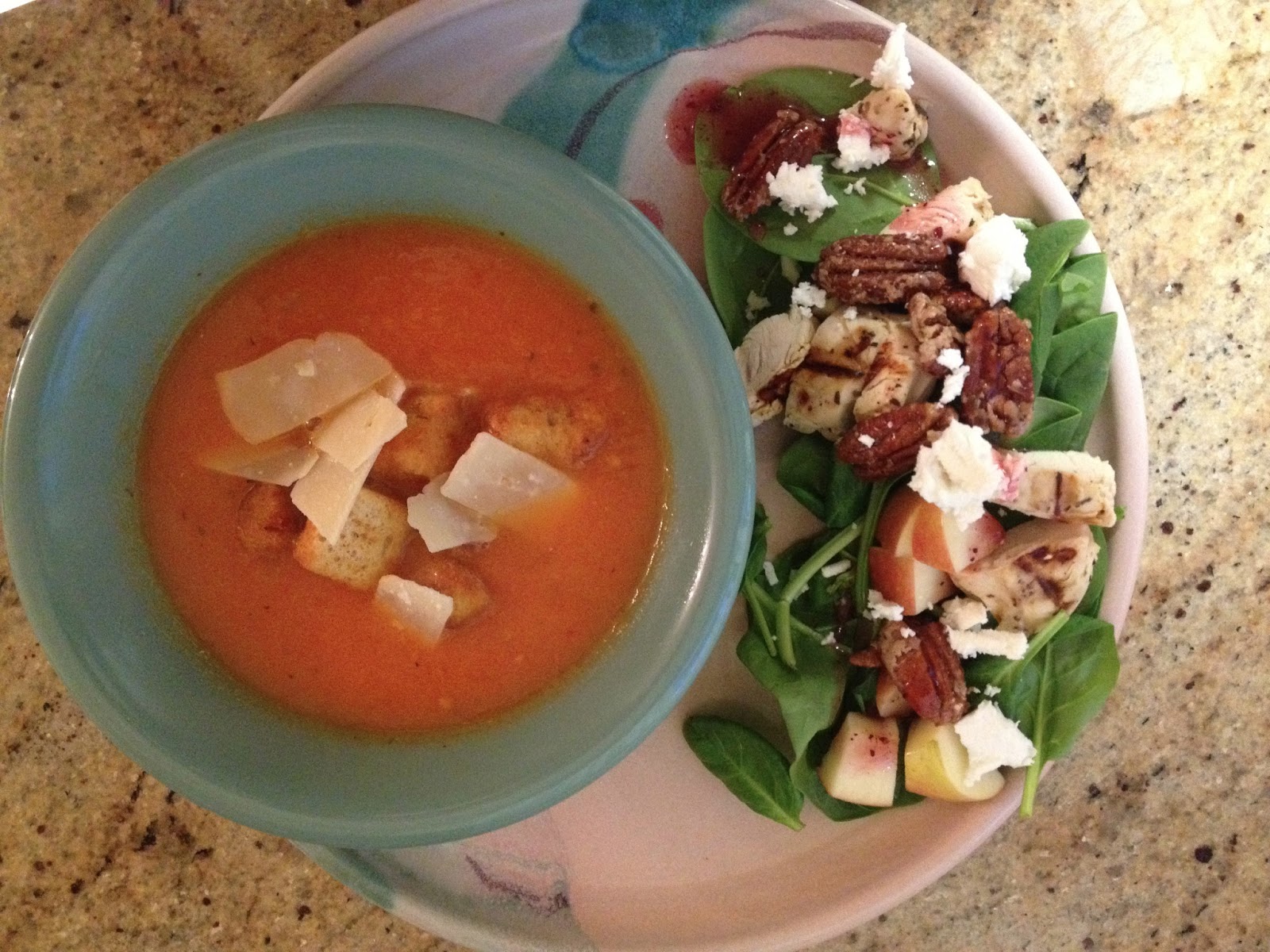 Here is the magazine version, presumably Photoshopped with lots of extra red coloring. 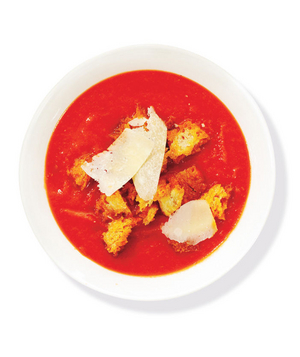 It surprised us! We all liked it. Even Jeff. With only six ingredients (other than the toppings), I didn't expect it to have such a nice flavor. Of course, the toppings add quite a bit in both flavor and texture! It was really healthy too -- no cream or other decadent ingredients... and it still tasted great. I would definetely make it again and it was so simple that I wouldn't even have to follow a recipe. I could totally wing it.

I could use an immersion blender, though. Transferring the soups that required blending (four of the ten) from the pot to the blender and then out of the blender into a separate pot (so the blended stuff didn't mix with the non-blended stuff) and then back into the original pot was a messy hassle.

Next week, I'll share an overall review of the soup project with ratings, things we learned, favorites, surprises and more!

Posted by Deborah Boschert at 10:28 AM

I think eating Campbell's tomato soup ruined tomato soup for many of us. Meaning that Campbells is kind of nasty and sweet and tastes like the can, so it is always a surprise to me how good simple, homemade tomato soup can be! Yours looks yummy and I will come and eat that salad any time you want to make it!

I love tomato soup! I'm not discerning either -- I love a nice homemade tomato soup and I enjoy Campbells. Lucky me, I DO live close enough to come to your house and eat this soup and salad combo! Beware -- I could invite myself over at any time. ;-)

I agree. Always disliked trying to cook and then move food into blender or chopper and then back
again....very messy. I really like using my immersion blender!

Deborah....alas your blog doesn't have a search box! Do you remember when you started your soup journey? Kristin liked the cauliflower one, too, and (belatedly) I'm thinking of trying several of these. I've pulled up the recipe hotlink, and will search there, too, but thought you might remember... it was near the beginning of winter I think....Cheers, Sarah

can't remember if I told that I made the cauliflower soup and it was a hit. so thanks!

Would you share the recipe? I love tomato soup and I haven't yet been able to perfect the taste of my homemade version. I have a nifty Vita Mix and can make hot soup in it so there is no transfering from pot to blender. The Cauliflower soup sounds good too!