If you follow me on Facebook, you've seen several status updates over the past week about the start of our family vacation -- or false start. Several months ago we decided to try to catch a Space Available military flight to Europe. It seemed like a great idea... and I think it still is, but it has not gone as smoothly as we had hoped.

There are hundreds of military planes flying from here to there all over the world for various purposes. If there is extra space on the plane those "seats" are made available to military members and their families. Of course there is a complicated formula for prioritization of passengers. Military members flying on official military business obviously have the highest priority category. Retirees flying for leisure have the lowest priority category. There are several categories in between. People within the same category of prioritized by how long they've been signed up on the list. All of this requires three to four hours at the terminal before your name is called or the flight is officially closed.

We padded several days into our vacation window allowing for a flexible schedule on both ends depending on whether we'd get on a plane. We're going to try again this evening, but if we don't get on, we'll have to go to Plan B -- a week in Philadelphia and Pennsylvania Dutch Country.

So, over the last 7 days, we have tried to catch 5 different flights at 3 different terminals with no luck. 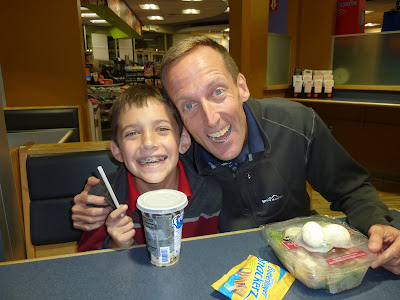 After one late night rejection, we soothed our sorrows with snacks at a gas station.

It's been frustrating, but also a wonderful adventure. 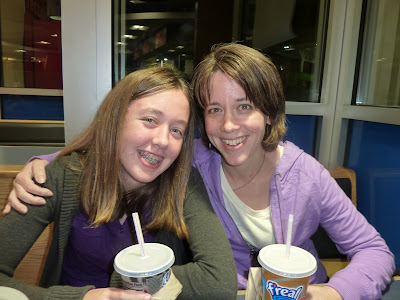 These instant "f'real" shakes definitely lifted the mood a bit.

We've created a supportive little tribe of people who have been doing the exact same thing this week. Claire and Benjamin have played cards and video games with lots of other kids. Last night when we didn't catch the flight, we joined another family for a great Mexican dinner and a bit of commiserating. I've chatted with young military members who are stationed in Germany who have just spent three weeks in the US visiting family they hadn't seen since they got back from deployment. One young man is traveling alone with his baby daughter because his wife, who is also active duty, was not able to take leave. Some families are stationed in Europe and are trying to get back. Some live in the US and are trying to visit family in Europe. Some just want to get out and see the world -- like us. 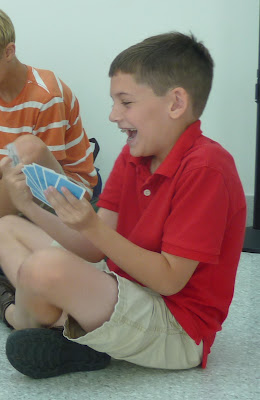 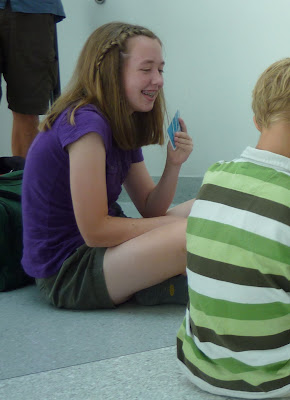 All kinds of thoughts have gone through my head over the past week. There were some very ugly thoughts on Saturday night when we drove two hours to Dover, Delaware to catch a flight that was supposed to have 70 seats available. We arrived at the assigned time of 3:40 a.m. to find that the schedule had completely changed and there was not even a plane on the runway. Then we were unable to find a hotel and we had to drive two hours back home. Awful. There were lots of frustrated people that night.

I'm trying to focus on more enlighten thoughts. I'm thankful that we have the luxury to set aside time for vacation. The community and enthusiasm within the larger military family is ever-present. My kids are fantastic travelers! My husband is also a very experienced, creative traveler and he is constantly exploring options for train travel, lodging and new possibilities every time we get rejected.

Before coming home last night, we actually went to the grocery store to get milk and fresh fruit. We haven't had any for several days. You know how you try to eat everything before you go on vacation? So, everyone will get to enjoy a decent breakfast today.

I suppose some people would ask why we've bothered with this whole process. Partly, we've already invested so much time that it seems silly not to keep trying, assuming our name is moving closer to the top of the list with each try. (Actually, we've been at the very very top of the list twice but not enough seats were available.) Obviously, the idea of saving several hundred dollars rather than buying commercial tickets is a good motivator. Also, it's just good to try something new and really invest ourselves in being completely flexible. There are some lessons to be learned there for sure.

We've also made the most of the days between the time at the terminals.

We visited the Adventure Park at Sandy Springs and LOVED it! I think it was even better than last summer. 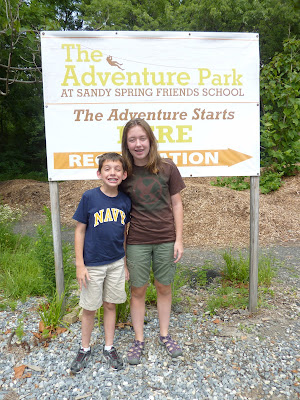 We also went to the National Zoo, saw the new Ice Age movie, had dinner at Founding Farmers in DC, enjoyed live theater as part of the Capital Fringe Festival and relaxed a lot at home.

I know several of you have kept your fingers crossed for us. Thank you! One more try... I'll keep you posted.

This may be one of your most memorable vacations ever, regardless of whether you are finally successful in getting on a flight. I love your spirit and am seriously hoping this last try is THE ONE!

Yes! I have my fingers crossed, and my toes, and am saying a little serenity prayer for you!! I so want to have a vicarious trip with you to Europe and meeting Francoise.

Your possitive attitude and the flexibility of your family says lots of good stuff about you,Jeff & your children. We had a late night snack adventure once like yours and my kids still remember that as a fun vacation.

I'm with Terry - I'll bet the kids will more likely remember all the crazy things y'all did while waiting at the airports, and if you end up getting to Europe, it will be all the sweeter because of what you did to get there! Hooray for family adventures!

And fingers crossed the last time's a charm!

My fingers are so crossed that they're starting to hurt!

I am so impressed by the smiles and your family's tenacity. I have yet to try Space A for all the reasons you guys have not yet made it on a plane (I've always needed a connecting commercial flight and they're hard to get when the first flight is so unpredictable). It does seem like something worth trying at least once though and i wish you guys the best of luck tonight. Plan B sounds good too though, and this whole process does make for a very memorable "What I did on my Summer Vacation." You guys have a great attitude and I know that no matter what happens you WILL make it "all good."

An amazing story -what a great lesson for your kids - you don't always get what you want but you can have great fun trying! Think I would have given up after the 2nd or 3rd rejection - hope you get there one day - don't think this is available for Aussie service people - your choice is commercial or commercial!!!