My son Benjamin is participating in Destination Imagination this year. Since he was really interested and it seemed a great program for his skills and interests... and because programs like these need volunteers, I became a team manager and off we went!

Destination Imagination is basically competitive, creative problem solving and team work -- with emphasis on creativity and teamwork! It's been very challenging and very fun!

This weekend the team had an opportunity to attend a mock tournament with several "instant challenge" events. An instant challenge is a problem to be solved by the team using all their creative problem solving skills in a very short time frame, usually 6 to 8 minutes. Some instant challenges are performance based, some are task based and some are a hybrid.

One of the challenges was to build a bridge across two pvc pipes using various house hold stuff: index cards, mailing labels, paper clips, straws, etc. In addition, the bridge needed to support up to five marbles. More points were awards for the length of the bridge and the number of marbles the bridge could support.


Here is the team in the process of conceiving and building the bridge. They had five minutes. 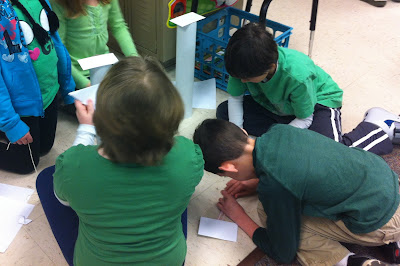 The team's name is The Unknown Pickles, thus the green t-shirts.

Here the appraiser is measuring the bridge -- 14 inches! She confided to the kids that theirs was the longest bridge of the day. 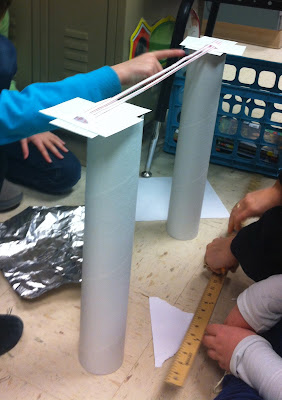 Here the team is carefully placing the marbles on the bridge. It held three marbles!

They extended the straws by squeezing them into each other, then created two sets to run parallel across the span. The marbles set nicely between the two straws. What a genius design! Unfortunately, as they added more marbles, the straws bowed out and the marbles fell through. They quickly thought of some improvements for their bridge, but they were not allowed to change the design after the five-minute building period.

It was a great day and I was so impressed with these energetic, creative 10-year-olds! The experience is about so much more than a bridge made from straws. It's also about building bridges to success, self-confidence, experimentation, community-building, leadership, and creativity!
Posted by Deborah Boschert at 2:07 PM

What a fabulous experience for the kids. Programs that give them a chance to explore their brains and develop skills are important in this electronic age. Congrats to all.

Such good experience for the kids as they grow into adults. I pretty much feel like the whole challenge thing is the model of my everyday life, don't you?