After days and days of rain last week (and only barely recovered from Irene the week before), both the kids soccer games were cancelled last Saturday. So, we ventured into DC to see the new MLK memorial. 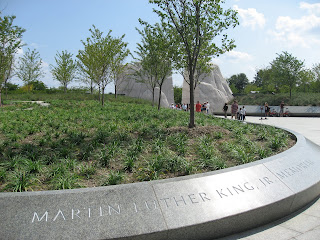 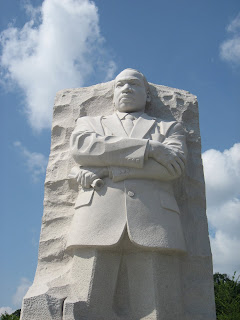 Below, you can see the quote on one side of the memorial, "out of the mountain of despair, a stone of hope." (And the Washington Monument in the distance.) 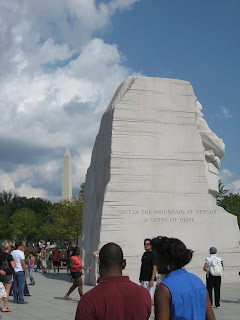 Then you can see here, how the stone with the MLK sculpture appears to have slid out of the mountain section at the entrance. I really like how this emphasizes that quote. 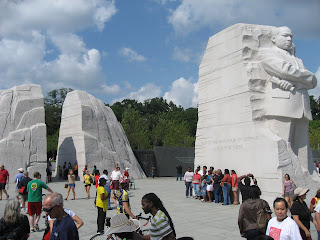 There are several quotes throughout the memorial grounds. Here's one of my favorites. 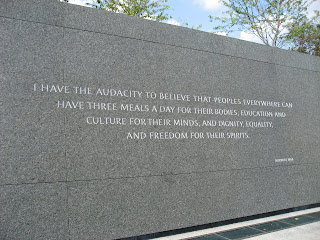 The quote on the other side of the figure has been the subject of controversy. 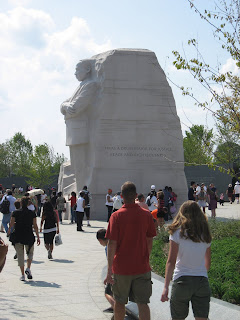 Another controversy... of all the quotes engraved throughout the memorial, which would you MOST expect to see? It's not there.

I am sure there was controversy about the Lincoln Memorial when it was built. They ran out of money building the Washington Monument and stopped construction for years. It might be interesting to study the history of the various memorials and monuments at the mall. Mostly, I just truly hope that the new MLK Memorial becomes a place where people of all ages from all over the world and might come and see Martin's strong, determined, hopeful face and read his wise words and feel called to action.
Posted by Deborah Boschert at 8:43 PM

Email ThisBlogThis!Share to TwitterShare to FacebookShare to Pinterest
Labels: DC

Deborah, I was just there, and your picture captures very nicely the way MLK came out of the mountain of despair. It's a great image, And, a great thought, too!