We had a wonderful time at the Science and Engineering Festival on the National Mall last weekend. It was a huge event with hundreds of booths staffed by various educational institutions, professional organizations and companies. Every booth had some kind of hands-on, interactive project. 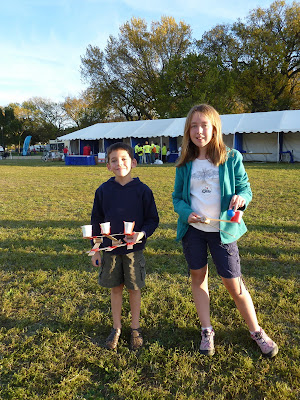 The kids made catapults, created Lego robots, simulated earthquakes, looked at parasites in a microscope, tested their intelligence vs a monkey, measured their lung capacity and more! It was so exciting to see so many kids and families excited about science!

Then we went out for dessert. Benjamin and I had cupcakes. I've never been a huge fan of cake, in general, but these cupcakes were so tempting, that I decided to give one a try. 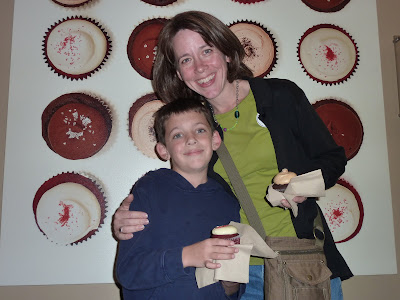 Benjamin chose Red Velvet and I had Chocolate with Peanut Butter icing. Holy deliciousness. That was the best cupcake I have ever had in my entire life.

Jeff and Claire had gelato. 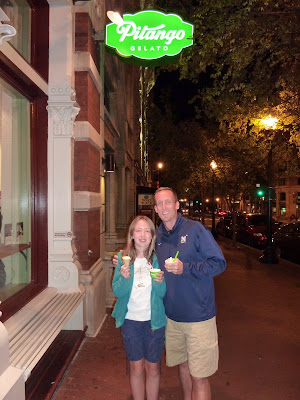 Apparently it was also quite good, but I still can't get my mind off that cupcake.
Posted by Deborah Boschert at 9:03 AM

I wonder what happened in our childhood to make us not like cake? For me the only exception was pregnancy and a really good cupcake. I am happy to pass on all other cake.

I have a hard time resisting my favorite cupcakery. I think it might be the ratio of yummy frosting to cake. My favorite is chocolate peanut butter!

Sounds like a wonderful family adventure! I love seeing how you are taking advantage of all the fun places there are in your new setting! That cupcake sounds delish, too. Chocolate and peanut butter is my favorite combination in almost any dessert so that would have been my choice, too.

I don't think you could have gone wrong with choices like those!