This one is a little "out there." Still fun, though! 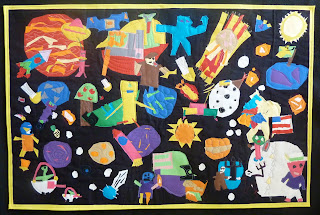 Initially, the theme was outer space. But several of the kids really wanted to include their love for the Percy Jackson books (which are based on Greek mythology). So we have Zeus throwing a lightening bolt (while drinking a Diet Coke). 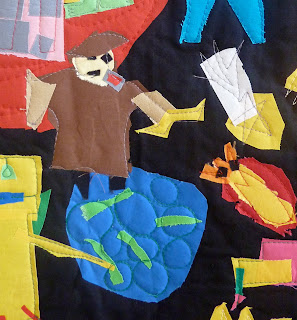 And we have two Poseidons holding tridents. (And another little alien creature drinking a 2 liter of Diet Coke.) 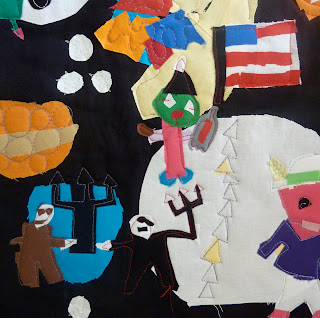 There is also an apple tree and various floating fruits on the left in the full image. I used some glow-in-the-dark thread for the quilting. Pretty fun!
Posted by Deborah Boschert at 6:45 PM

These are really delightful!

These quilts are so much fun. Just imagine what they would have done with Medusa, if they had gone all the way into the Percy Jackson stories!

My recollection of Greek mythology is that many of teh gods did their work in teh sky and Mt Olympus was pretty much up there too, so I'm seeing thee connection. I'm curious about the dude in teh purple shirt with a feather in his white fedora. He looks like my neighbor in his Sunday-go-to-meetin' clothes. ;-)

Geez. I have been studying drawing for how many years? How many years will it take to become child like again?