Here's a smallish quilt I finished a couple of weeks ago. It's called Encrusted Pathway. It's 8ish by 20ish. (I guess I still had some "long skinny" ideas floating around.)

Recently, the Frayed Edges received a request from a publisher at Lark books to submit project proposals for a new "quilting with beads" book. (Lots of other fiber artists were invited to submit too -- it's not like we've got a book deal all on our own. Yet.) I really wanted to submit an idea using washers. I love washers. So many colors, sizes, shapes, etc. etc. And cheaper than beads. I played around with some ideas that sucked and finally put this together. It's very reminiscent of my later Anthony Ave pieces and somewhat similar to Encrusted Cairn. In fact, I used some of the same hand painted fabrics that I did in a workshop with Maxine Farkus.

I used 2ish inch squares and just started fusing them together in a grid. I was careful to keep a fairly tight color palette. Then I added some sheer pieces -- cheese cloth, organza and some weird green stuff that was wrapped around a bouquet of flowers. It melted a bit... which added some interesting texture. But I had to be careful with the iron. 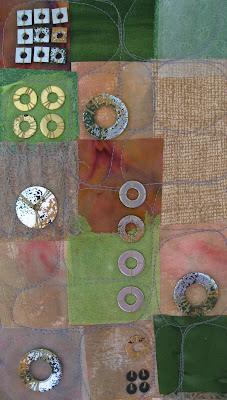 Then I quilted some cobblestone shapes through just the top and the batting. The washers seemed too shiney and reflective, so I sponged a bit of paint on some of them before sewing them on. Again with the grid format.

I wanted to try something new for "finishing" so I used a piece of dark green felt as the backing. I had trimed the batting just smaller than the top, so the felt lays just beyond the edge. I trimmed it with my deckle rotary cutter. I don't know that it's an ideal method... the felt sheds a bit. But, I like the overall results. 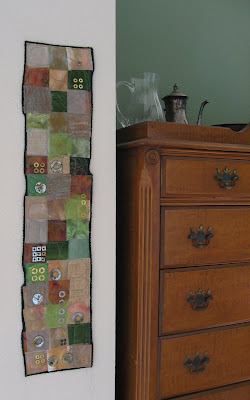 Here is the quilt hanging in our foyer next to the dining room. I didn't plan to coordinate the color palatte with the green wall in the dining room or the brown of the furniture -- but doesn't it look great?!

I did submit the proposal to Lark. I think it might be a bit more edgy than they want. Haven't heard back from them yet.

Posted by Deborah Boschert at 10:46 AM

I am going to get in to hubby's hardware drawer and look for some washers. I think this is a great idea!

I love your washer quilt! I used washers to embellish a quilt I made about 5 years ago and it is still one of my favorite pieces. You can see it here: http://photos1.blogger.com/blogger/4626/1584/1600/rockroll.jpg

It's fantastic - I look forward to seeing it published - as I am sure it will!

I love it, especially like the sponged washers - the added texture gives so much unexpected interest.

I think they'll probably seriously consider it. It has lovely colors, edging, and I like the proportions. It photographes very well and the unusual proportions will make it a stand-out. Well done!

I love the texture of this!

Your weird green stuff around the flowers was quite possibly lutradur... they give it another name to sell to florists, but its the same gear...

Me likey a lot! This is wonderful. Some time before AQC I must make a stop at the hardward store from a mixed bag of washers, spacers, and nuts. Maybe even cotter pins!

what a stunning, gorgeous piece!! it looks beautiful on the wall with the green wall in the back-ground.

There is something so compelling about combining the rigid hardware with the soft fluid of fabric. This works so well. The mix of textures is done with such beauty.

I'm a sucker for washers on quilts! So, yes, I'm loving it!

I really like this long piece. I guess I am going to be looking at the hardware store for quilt supplies now. Washers, here I come!