Painted Fabric
Someone asked about what I used to paint fabric for my "trades" for the Art and Soul retreat that I went to earlier in May. I will not even begin to tell you how I did it... because I am far far far from expert. But I will send you to Alma Stoller's tutorial, who first inspired me. And to Sonji Hunt who has a perfect tutorial on her blog. And other here. The key is just to do it! And to let the layers dry before you add more paint.

Here is a picture of one piece of the fabric I painted. It's a bit cosmic, I think. 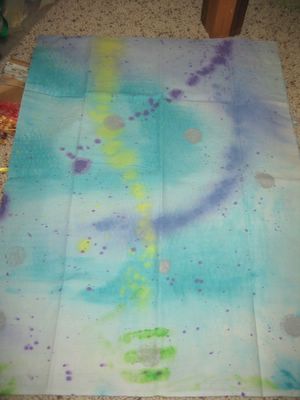 Can you see that ripply spotty texture in the teal sections? That's from the corragated cardboard that the fabric was pinned to. I painted 9 yards and cut them into 36 fat quarters. I tied them with random pieces of ribbon and added a card with my blog and email.

Here they are all packaged up. 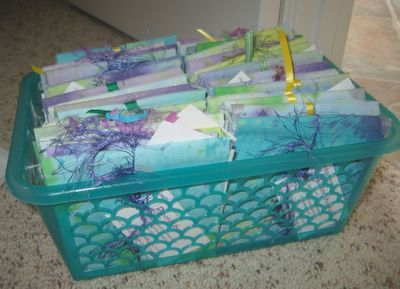 Trading was fun. I got various atcs, some beads and other baubles, small pouches, handmade pins and other goodies. There was definetely a creative spirit of generosity! Delightful. My favorite item was a stunning print of a photograph by Amber Woodward. You can see it here. Did I say stunning? Don't you agree?

Letterboxing
Someone also asked about letterboxing. Letterboxing is a supercool combination of hiking and treasure hunting. Letterboxes are hidden all over the world. They are usually plastic containers which contain a small journal and a rubber stamp. Letterboxers carry their own personal journal and stamps. When they find a box, they stamp their stamp into the journal in the box and maybe write a little message like "great box, beautiful location" plus the date and where they are from. Then they take the stamp from the box and stamp it in their journal. It's a record of boxes that they have found. Quite often the stamps are handcarved and the journals are often handmade.

There are two sites with compilations of letterboxing clues which may be searched by location. The original site is letterboxing. org and there is a new more comprehensive site called atlasquest.com

We've been letterboxing for about four years and have found over 50 boxes in about 7 states. It takes us to wonderful locations that we may not have come across on our own. Plus, since I'm a rather "task oriented" type A person, when we go out, it helps me to have a mission rather than just strolling about enjoying the world. (Isn't that awful?)

We also planted our own box when we lived in Maine. I blogged about it way back when... 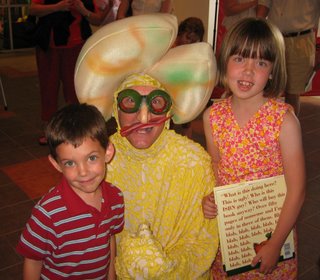 The kids and I went to see The Stinky Cheese Man at the Dallas Children's Theatre this weekend.

It was based on the book, The Stinky Cheese Man and other Fairly Stupid Tales. (We don't like the word "stupid," even when it's just part of a funny book!) The play followed the book and the illustrations very closely and we were all delighted by the performance.

Time magazine ranked the Dallas Children's Theatre as one of the top five children's theaters in the country. I don't really know what that means, but it was quite excellent and we'll go back for sure.

We went to the Target sponsored performance where all tickets were only $10 AND every kid got a copy of the book on the way out. As if I needed another reason to love Target. Claire is holding the book in this picture. The actors were thrilled to autograph the books after the show. 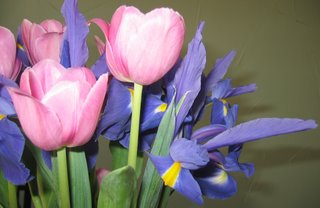 Jeff (and the kids) sent me flowers for Mother's Day. He usually orders from ProFlowers and usually they are wonderful. The first bouquet which arrived just before Mother's Day was lovely, but the buds were already almost all the way open when they arrived and they were droopy and shrived less than two days later. Bummer. I called Proflowers and suggested that this was not their usual standard and they sent me out another bouquet the next day. It was fabulous! Great service!

I love the little curve of that one tulip petal in the center at the top. It's like a jaunty little hair flip or a clever, snappy greeting.

Ok one more thing...
Have I said before how much I adore Anderson Cooper? Swoon. He was on Oprah yesterday and was so interesting and thoughtful... and hot. He has a new memoir out. He said lots of things about Katrina (and Rwanda and Bhurma and Terry Sciavo, etc) but one very thoughtful bit was about how everyone in New Orleans kept "hoping" that the storm wouldn't hit, or that the evacuation would go smoothly or that the government would step in. But, he said, HOPE IS NOT A PLAN. Not for politicians and not for individuals. What are you hoping for that you really need to plan for? 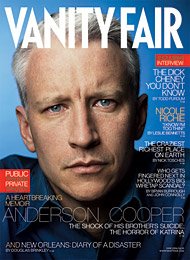 Oh and did you see Anderson on the cover of the new Vanity Fair? Oh yeah, I totally had to buy that on impulse in the check out lane.
Posted by Deborah Boschert at 9:38 AM

I love this post! Something for every reader, I'm sure. I'm sorry to say that I did not know who Anderson Cooper was before. I may start watching more CNN. Glad to hear you are still "boxing". We are planning to go this weekend between Katie's soccer tournament games. Don't forget the season finale of "LOST" tonight!!!

Anderson is divine! I must get this magazine and tack his gorgeous face up in my studio. When I can't think what to do next--I can just look at him.

saw him on oprah too and he is not only handsome but so interesting...I thought I'd be interested in reading his book.

I'm so glad there are so many good family things for all of you in Dallas!

As for Anderson Cooper.... more than his looks, I like that he speaks his mind and lets his emotions show. Was blown away to learn he is Gloria Vanderbilt's son.... talk about the son of privelege, and made it on his own. Yet another thing to like....

Eli breathed germs on me, so gonna go to bed early.... have my journal quilts almost done in plenty of time for the deadline, and Tableau coming along too! "Talk" to you soon, and still miss you,

Thanks for such a great compliment about my photography! I was actually looking for my own blog (yes I forgot to bookmark it) and I saw this link with my name! How sweet! :hugs: I remember you too- I have your fabric still sitting here in my studio. Thanks so much!

Thank you for the links to those GREAT fabric painting sites!!! I printed the tutorials off and am itchin' to give them a try!!! And--I'm right there with you about Anderson Cooper. I have adored him since he was on an early, early news show on ABC with Talia Assuras.

Wow Deborah! I love stinky cheese man! The book anyway. I want to go letterboxing! I want to create a letterbox now too! I think it is great that you are allowing for your type A personality in a proactive way.

This was a great post. Your fabrics look fabulous. Anderson Cooper! Ooooh yeah!!

Wow, great post. We took our nieces (8 years old) to see the Stinky Cheese Man in Philly and found it quite enjoyable. The girls loved it! We wrote about the show on our blog, http://outwiththekids.com.
We write about theater, music, books, trips, tips, and events for parents who try to raise healthy, happy, and interesting kids.

Jeff
Out With The Kids